Whilst Bojo prepares for his showdown with parliament over the weekend, we look at implied volatility levels for select GBP pairs. 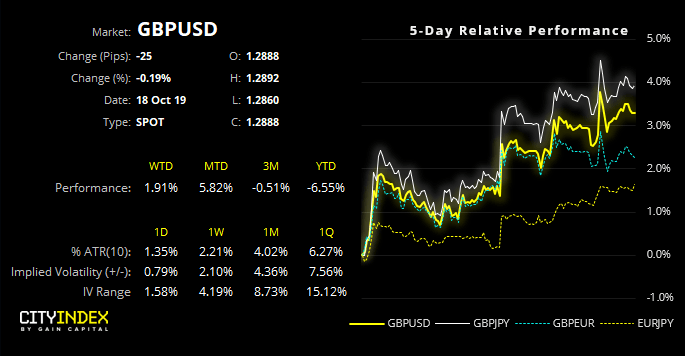 No sooner had newswires frantically announced that a Brexit deal had been agreed, the DUP reiterated their views haven’t changed, meaning it’s unlikely to get through parliament his weekend, resulting jolts across GBP pairs and a reversal of fortunes on the FTSE. Still, anything can happen in the land of Brexit (apart from a deal…) but headline risk is clearly still a factor as we head towards the weekend.

Given that there’s a wide expectation that parliament will reject the Brexit deal over the weekend, and prices are clearly stretched to the upside for GBP crosses, then there’s a case to be made for a decent, downside move for the British Pound. However, this could also mean that the surprise of Brexit going through could still catch investors off guard and see a hefty move to the upside for GBP pairs. So we’ll keep an open mind on the outcome and assess potential levels of volatility options markets are suggesting over the next week.

Options pricing assumes a 68.2% chance of prices falling within these ranges, so they are far from perfect. Although it also means there’s a 31.8% chance of falling outside of them. That said, they’re a widely used metric for traders to assess risk heading into events such as this weekend’s vote. And as volatility does not include likely direction, we’ve included the levels above and below the strike price for overnight and 1-week implied volatility (IV). 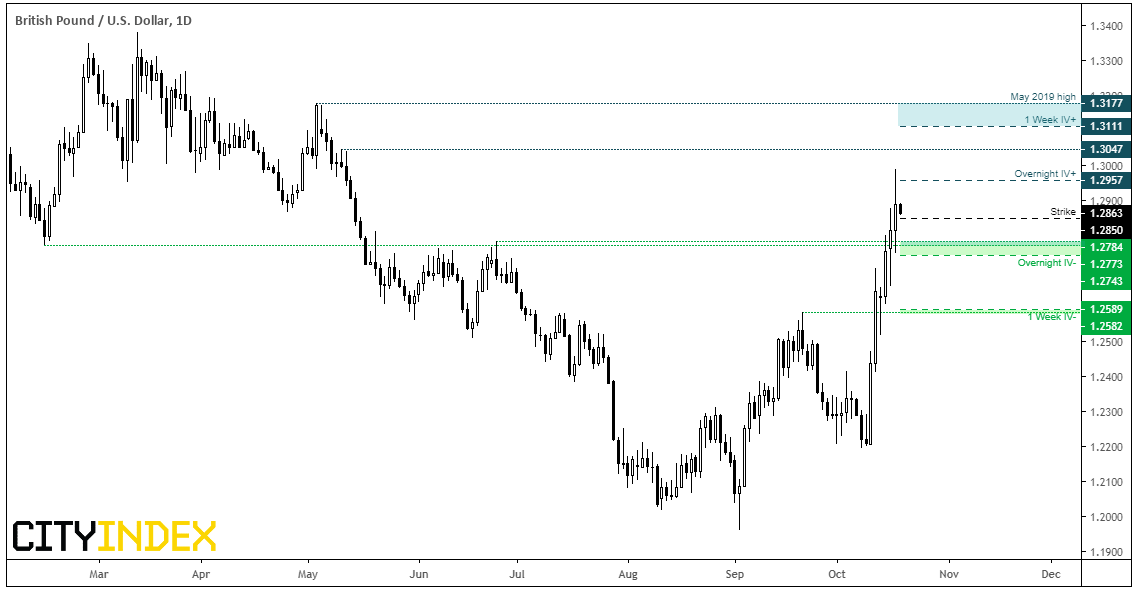 GBP/USD: Another GBP pair, another one which appears over-stretched. Yet we don’t feel inclined to call for mean reversion ahead of a high-risk event. The main points of interest on cable are that bulls have enjoyed the best 5-day rally since Brexit went through. Yet it still trades below the Brexit close of 1.3675, which sits around 6.3% north of here. The overnight IV suggests cable will fall somewhere around yesterday’s range but, of course, headlines can see IV levels expand or contract too. So the weekly may be a better gauge for price action, and interesting to note that 1-week IV- sits just above the September high and the 1-week IV+ beneath the May high. 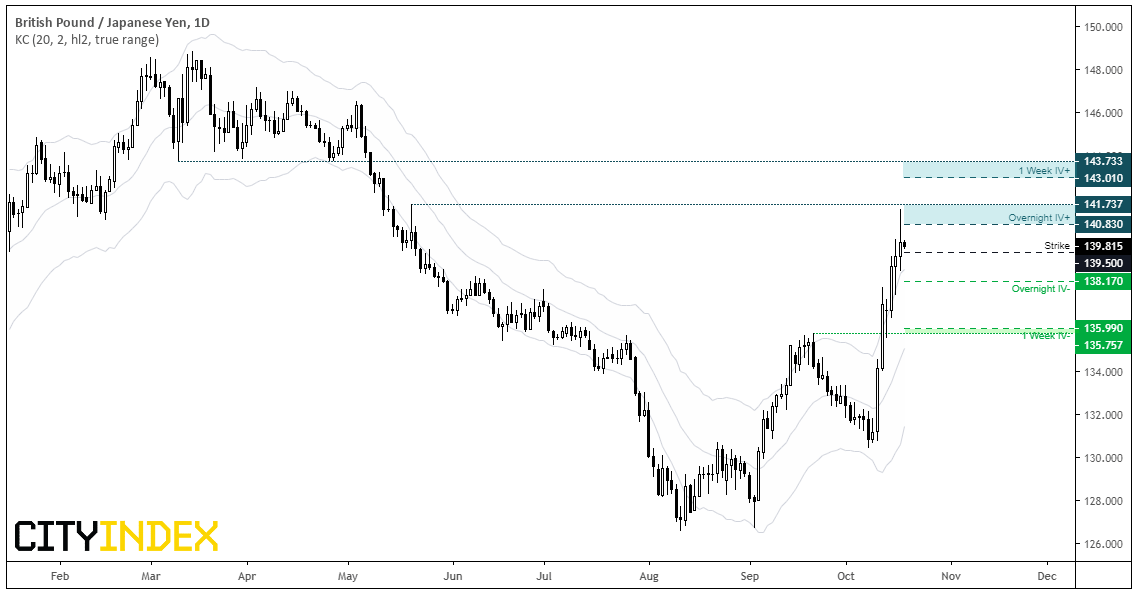 EUR/GBP: On a technical standpoint, EUR/GBP could appeal to a swing trade long given the two wide-bodied doji’s that have formed at the lower bounds of the bearish channel. However, technicals should be taken with a pinch of salt when approaching such important events, as a Brexit deal would likely make easy work of the bearish channel and break decisively low. It’s interesting to note that 1-week IV- implies a move beneath the 2019 lows, whereas the 1-week IV+ has it near the top of the channel. 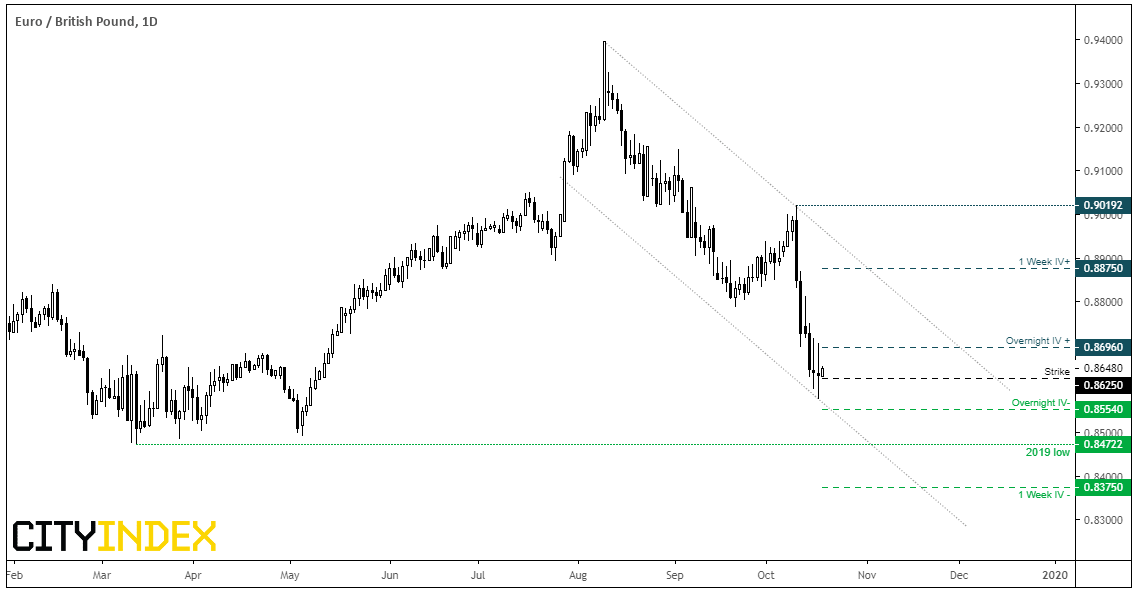 GBP/JPY: On the day the Brexit vote went though, the biggest mover of the day was GBP/JPY which, at one point, traded close to -20% lower for the session (before settling a casual -12% lower). So this is certainly something to consider as we head into next week as it would be the classic Brexit risk-o-meter. For what it’s worth, there’s a bearish hammer below resistance which is extended beyond its upper Keltner. And there’s also more in the way of nearby resistance, so perhaps (like the day of the vote) there’s more action to the downside on this cross.