USDJPY pair is one of the most traded currency pairs in the world due to the low interest rate of Yen. The trending popularity of the USDJPY pairs remains within its trending charters tics and reliability in its trading signal. Professional traders use these pair as a long-term investment instrument to make a decent profit from its trending movement. The pair has rallied more than 5k pips after hitting the bottom 75.50 level back in 2011.From that pivot level, a strong upward rally of the pair has been established hitting a significant high of 125.50 level. From that level, the pair has started its correction and now trading near the 50% retracement level which is supposed to provide some strong support to this pair.

The USDJPY pair has just bounced back from 50% Fibonacci retracement level.100.73 level has provided strong support to this pair which might even drive the price back upward direction again. Currently, traders are expecting a range movement of the price between, 106.723 where the 38.2% Fibonacci retracement level lines. So, professional price action traders will use these two major pivot points in the weekly chart to enter into the trade. There has been a mass chaos starting from the month of September about the interest rate hike decision, so trading those pivot level without price action confirmation signal will be an immature act. If the inflation rate is readjusted then we can expect a double bottom formation on the weekly chart .In the long term scenario, the most recent top from 125.70 level has started its correction. Currently, the corrective pattern has completed 50% retracement of the initial upward swing near at 100.00 level marks. If the current level fails to hold the price above the 100.00 mark then we can see another sharp drop in price towards the 61.8% Fibonacci retracement level. 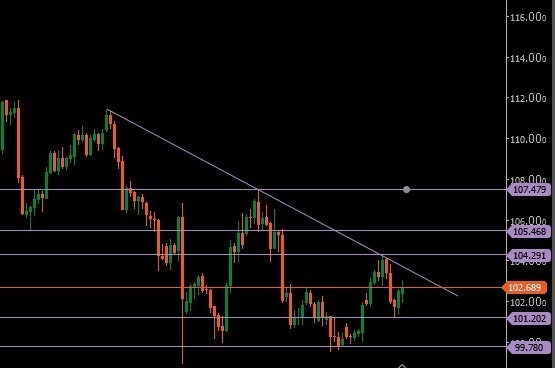 The recent sharp fall of the USDJPY pairs after the topping of 125.70 levels has created mass confusion into the mind of investors about the long-term bullish trend of this pair. Currently, The price is heading towards the medium-term bearish trend line resistance situated at 103.30 level. Those who are willing to short this pair can use price action confirmation signal near the trend line resistance to execute their short order. If the market manages to breach the trend line resistance then we will see an immediate rise in the price towards the 104.291 level. Failure to hold the price at the level will bring further upward rally in the pair towards 105.468 levels. This area is going to provide some significant amount of resistance to the USDJPY pairs since this level was marked by the low 2nd may 2016.However, a daily closing above that level will confirm upward continuation of the pair and 107.479 level will come in action.

On the contrary, if the trend line manages to hold the upward move of the pair then we will see an immediate sharp fall in the price towards the 101.20 level. Experts have marked this level as price magnetic zone since the price has a tendency to form a ranging move structure centering the 100 level mark. A daily closing below the 101.20 mark will lead the price to 99.780 levels. The current price action scenario argues against going short in this pair since the price is trading too close to the support zone. Moreover this the month of September that is interest rate decision-making month by the FED. Traders are expecting low volatility in this pair until the FOMC meeting minutes. From the early part of the year 2016, the US dollar has been struggling against its all major currencies. Even the Low yielding currency like Yen has flattened all the gains of US dollar in the last few months. Rumor has been spread that the FED might still hike their interest rate in the upcoming months if the inflation rate gets readjusted. But if the rate hike gets postponed this year then we are sure that the US economy will shatter for the year of 2017.Incase FED remains silent in the recent discussion then the rate hike decision will be increased to 60% in the month of December. Considering all the fact, going against the US dollar with the Japanese yen will be an immature act. Those who are aggressively waiting to short this pair must use proper price action confirmation signal at the key resistance level. Proper risk management system should also be followed while trading this pair.

Summary
Technically the USDJPY pair has completed its correction after the recent fall from the 125.70 level. Currently, price is trading near the 50% retracement level which might refuel the pair for another sharp rise. But all the technical analysts are waiting patiently for the FED rate hike decision since these will be the driving force for the pair for the next few months. Considering the technical parameter and fundamental news, the market remains still bullish despite the bad economic news releases in the month of September. According to expert professionals, the market is ready to test the high of 125.70 levels again but before it does so the rate hike must be done by the FED. On the contrary, those who are bearish on this pair might get luckily by the delaying of rate hike decision in the upcoming FOMC meeting minute. These might help them to ride the sharp drop of the price towards the 99.50 level.