The Canadian dollar has ticked higher in the Friday session. Currently, the pair is trading at 1.2609, up 0.05% on the day. On the release front, the focus is on Canadian employment indicators, with the release of Employment Change and the unemployment rate. Traders should be prepared for some movement from the Canadian dollar in the North American session.

This week’s market selloff has boosted the US dollar, at the expense of the Canadian dollar and most other major currencies. The Canadian dollar has dropped 1.4% this week, and is down 2.5% in February, erasing the gains we saw in January. Interestingly, the catalyst for the current turbulence has been solid economic data in the US, namely, improved payrolls and wage growth reports. This has raised concerns of inflation, which could lead to a quicker pace of rate hikes from the Federal Reserve. This sentiment has sent the bond markets higher, while weighing on global stock markets.

After some spectacular readings, Canada’s economy is expected to show more modest job creation in January, with an estimate of 10.3 thousand. The unemployment rate is forecast to edge up from 5.7% to 5.8%. If these predictions are within expectations, the Canadian dollar could gain some ground on Friday, and end a tough week on a positive note. 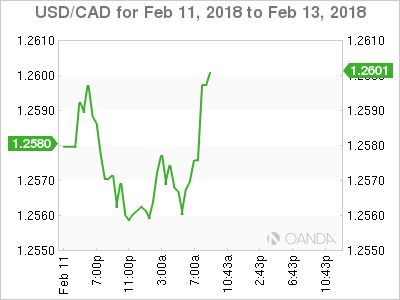