The risk sentiment and the SARB rate decision will be the main drivers of USDZAR today (Thursday), amid the domestic strife. It is likely that the central bank will keep its current repo rate as the country is still in recovery mode.

Nonetheless, the currency pair remained under pressure as the US Dollar traded near its highest level since early April. At the time of writing, the dollar index, which tracks the Greenback against a basket of currencies, was down. The USD index was down around 0.18% to close at 92.77. The Greenback’s safe-haven appeal has increased as the aggressive spread of the Delta coronavirus variant increases the risk-off. 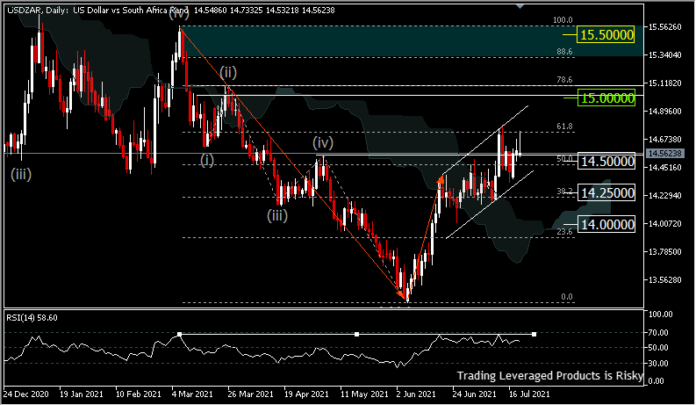 The USDZAR rebound of 13.3823 was still stuck at the 61.8% retracement level at 14.7846 and yesterday retested that level, but closed lower at 14.5623, with a total increase of only 0.09%. The intraday bias still tends to the upside, considering that the price movement is still above the Kumo average.