The US Bureau of Labor Statistics (BLS) will release the September jobs report on Friday, October 8. Following a disappointing increase of 235,000 in August, investors expect Nonfarm Payrolls to rebound and rise by 488,000 in September.

The data published by the Automatic Data Processing (ADP) Research Institute revealed on Wednesday that employment in the private sector rose by 568,000 in September, surpassing the market expectation of 428,000. Nevertheless, during the press conference following the September policy decision, FOMC Chairman Jerome Powell noted that they don't need to see strong jobs report to start reducing asset purchases. "Many on the committee think employment bar for tapering has already been met," Powell added and these comments could cause the market reaction to remain muted.

In order to understand how impactful the US jobs report has been on gold’s valuation, we analyzed the XAU/USD’s pair reaction to the previous 15 NFP prints. However, we omitted the NFP data for March, which was published on the first Friday of April, due to lack of volatility amid Easter Friday.

The FXStreet Economic Calendar assigns a deviation point to each macroeconomic data release to show how big the divergence was between the actual print and the market consensus. For instance, the August NFP data missed the market expectation of 750,000 by a wide margin and the deviation was -1.49. On the other hand, February’s NFP print of 536,000 against the market expectation of 182,000 was a positive surprise with the deviation posting 1.76 for that particular release. A better-than-expected NFP print is seen as a USD-positive development and vice versa.

Next, we plotted gold’s reaction 15 minutes, one hour and four hours after the release to see if the general market view held. 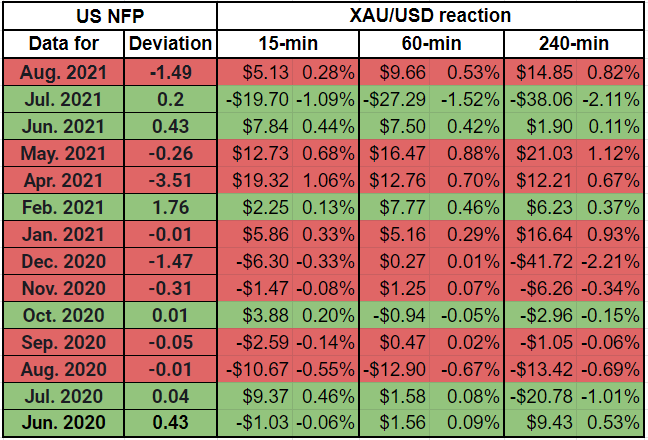 There were eight negative and six positive NFP surprises in the previous 14 releases, excluding data for March 2021. On average, the deviation was -0.88 on disappointing prints and 0.47 on strong figures. 15 minutes after the release, gold moved up by $2.75 on average if the NFP reading fell short of market consensus. On the flip side, gold gained $0.44 on average on positive surprises. This finding suggests that investors’ immediate reaction is likely to be more significant to a disappointing print.