Real GDP fell at a record pace in Q2, but monthly data suggest that GDP should bounce in Q3. However, uncertainties related to the pandemic continue to cloud the outlook later this year.

Broad Based Spending Declines in Q2

Data released today showed that U.S. real GDP plunged 32.9% in the second quarter, the steepest annualized rate of decline in the 74 years in which quarterly GDP data have been available (top chart). Previously released monthly data left little doubt that a record would be smashed with today's data release; the only question was the exact magnitude of the decline. In that regard, the plunge was not quite as severe as the 34.5% drop that the consensus forecast had anticipated. Nevertheless, this "miss" is simply a rounding error in a drop of this size. 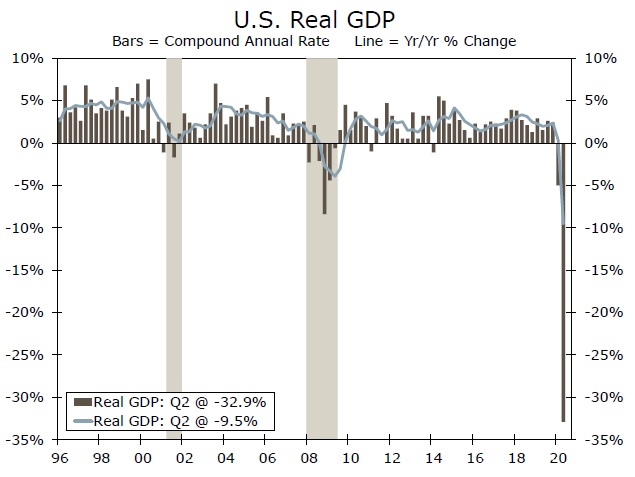 Parsing through the data reveals broad-based weakness in most of the spending components, which comes as little surprise given that the economy was more or less shut down from mid-March through mid-May. Real personal consumption expenditures (PCE) plummeted nearly 35% (middle chart), fixed investment spending fell nearly 30%, and exports collapse 64%. (The 53% drop in real imports minimized the drag on overall GDP growth from real net exports.) The only area of growth was the 17.4% rise in federal government spending, which largely reflects the administrative costs of the PPP loans that were extended during the quarter. 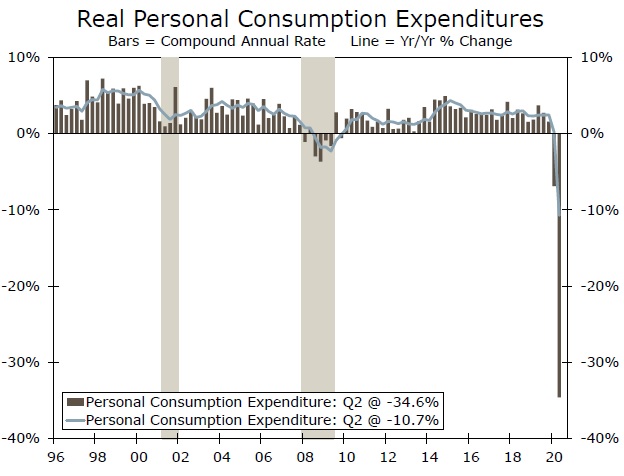 The big drop in real GDP in the second quarter largely reflects the collapse in economic activity that occurred in late March and April. But monthly data show that the economy bounced starting in May. For example, real PCE shot up 8.1% in May, and nominal retail spending rose 7.5% in June relative to May. In nominal terms, shipments of non-defense capital goods, which are highly correlated with overall capital spending, was up 4.8% in June relative to its April low. In short, the economy entered the third quarter with a fair amount of momentum. Indeed, our current forecast looks for real GDP to grow at an annualized rate of roughly 18% in Q3.

However, recent weekly indicators suggest that the economy is losing momentum again as COVID-19 cases have spiked in recent weeks. For example, initial jobless claims, which fell sharply in April and May, have moved sideways at an elevated level of 1.4 million per week recently. Chain store sales, which bounced sharply through June, have always moved sideways in recent weeks (bottom chart). 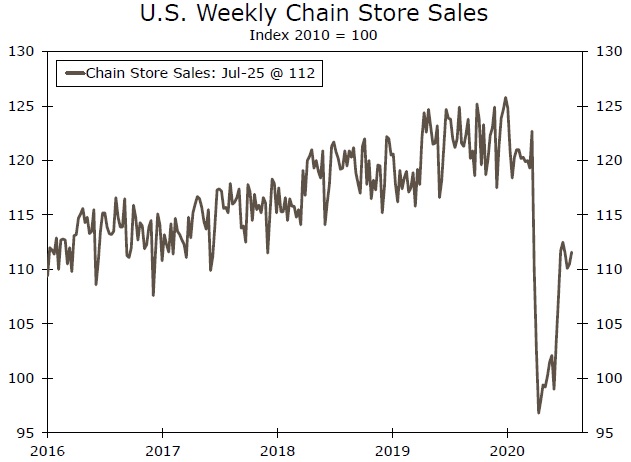 Our forecast of continued growth in real GDP in Q4 and in 2021 is predicated on our assumption that a full lockdown of the economy à la March and April will not occur in coming weeks and months. We acknowledge that there may be restrictions re-imposed in localized areas, but we believe that governors will be under tremendous pressure not to return to a full state of lockdown. That said, the economic outlook at this time is dependent on the evolution of the pandemic, which remains highly uncertain. To paraphrase a well-worn phrase, the only certainty at this time is uncertainty.