Annual inflation with a 7% handle? That has already happened, and now the focus returns to underlying prices – which are closely watched by the Federal Reserve. The dollar is ready to rally.

The world's most powerful central bank is on course to raise interest rates in March in order to cool down the steaming hot economy, but there is significant uncertainty about how fast it will go. Friday's Nonfarm Payrolls figures for January showed an increase of 467,000 positions, much higher than expected and on top of upside revisions. Employment is one of the Fed's mandates.

The second mandate is price stability – and the NFP revealed a whopping increase in wages, 5.7% YoY, which implies higher inflation down the line. While energy and food costs are volatile and prone to external factors, high pay pushes all prices higher. That is what the Fed is looking at more closely.

Therefore, the upcoming Consumer Price Index (CPI) release for January will likely focus on underlying price pressures, rather than the headline figures that the public and politicians are more interested in. It would help determine if the Fed raises rates by 0.25% or by 0.50% as some suspect.

As mentioned earlier, headline inflation has already hit 7% in December, and an increase to 7.3% or 7.6% would not make such a difference. However, Core CPI is projected to rise from 5.5% to 5.9%. If it surpasses the 6% level, investors would return to speculate on a double-dose rate hike. 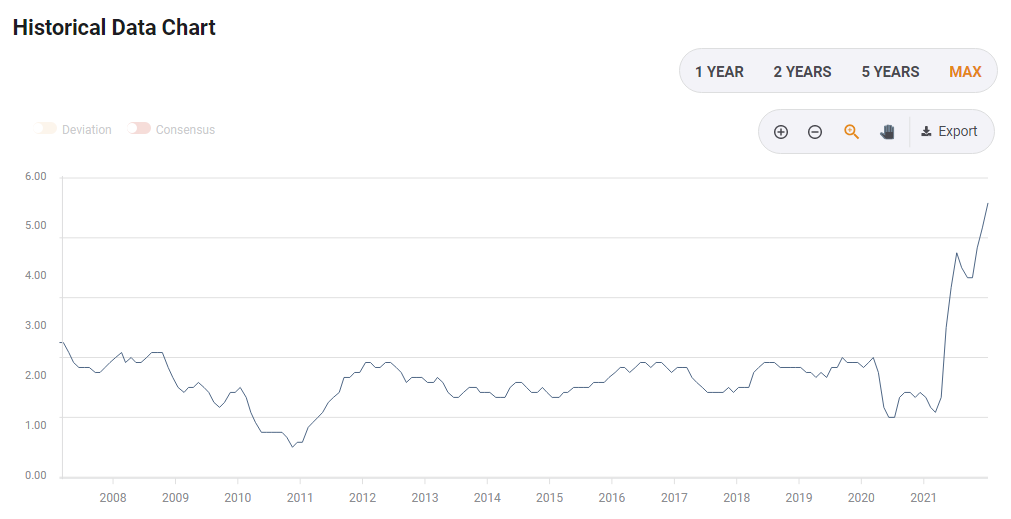 Back on January 26, Fed Chair Jerome Powell refused to commit to a standard 0.25% increase to borrowing costs, sending the dollar higher by opening the door to faster moves, such as 0.50%.

On February 1, no fewer than six officials at the central bank already played down such expectations, leaning toward a standard 0.25% increase. The list included several known hawks such as Atlanta Fed President Raphael Bostic and the greenback gave some ground.

Then came the Nonfarm Payrolls report on February 4, smashing all estimates and energizing the dollar. However, the European Central Bank and the Bank of England also began toward moving tighter policy, diminishing some of the greenback's advantages.

And now, the focus returns to the world's largest economy – which also leads on inflation. The dollar has room to run if the Core CPI hits 6% or higher, and even an "as expected" statistic at 5.9% would provide support to the currency pair.

It is essential to note that the Fed's target is 2% average inflation over time, so a significant miss with 5.5%, like in December, or even 5% would still be high. Nevertheless, a repeat of last month's data – which seems highly unlikely – would already send the greenback down.

The most probable scenario is for the dollar to drive higher in response to a high Core CPI read. This figure is critical for the Fed and beat estimates in the past three publications.

EUR/USD turns south towards 1.0150 ahead of EU GDP, Fed minutes

EUR/USD has come under renewed selling pressure below 1.0200 amid broad risk-aversion. The US dollar rebounds ahead of Fed minutes while the euro awaits Eurozone GDP. The shared currency remains weighed down by recession fears and gas crises.

GBP/USD drops below 1.2100 amid risk-aversion

GBP/USD is falling below 1.2100 in the European session on Wednesday as investors assess the implications of surging UK inflation on the BOE's next policy move. The US dollar finds demand amid souring risk sentiment ahead of US data and Fed minutes.