The US dollar rose against major pairs on Tuesday after three disappointing sessions with a decrease in trade war anxiety. European data came in lower than expected boosting the USD in a week that will be short on data. The main event this week will be the release of the third estimate of the US fourth quarter gross domestic product (GDP). The market is awaiting an improvement to 2.7 percent after the measure of growth was revised downward to 2.5 percent in the second estimate. The Bureau of Economic Analysis will release the final GDP data on Wednesday, March 28 at 8:30 am EDT.

The EUR/USD lost 0.31 percent in the last 24 hours. The single currency is trading at 1.2405 on the combination of month-end flows, comments pointing to a less protectionist Trump administration and weaker than expected European data. The short trading week in North American markets leading up to the easter holiday has been positive for the US currency ahead of the release of the final GDP for the fourth quarter. 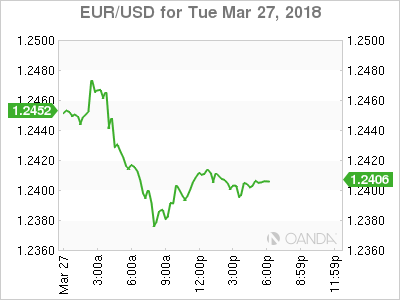 With little fundamental data to digest the market has been following the trade rhetoric from the White House. After an escalation of tariffs targeting China was announced some developments have led investors to believe it can all be resolved via negotiations with no need for tariffs to become a reality.

The US dollar remains weak in 2018. Despite steady growth data and a rate hike by the U.S. Federal Reserve and slowdowns in other major economies the greenback is held back by political conflict. The 2018 midterms are starting to look like a string of defeats for the republican party and the situation abroad was not helped by the surprise announcement of steel and aluminum tariffs by the Trump administration.

The GBP/USD lost 0.50 percent on Tuesday. The currency pair is trading at 1.4156. The currency broke the 1.41 price level and traded around 1.4080 during the session. Pessimism about US trade hurt the dollar but with more talk about possible negotiations the concerns about a full blown trade war have subsided. 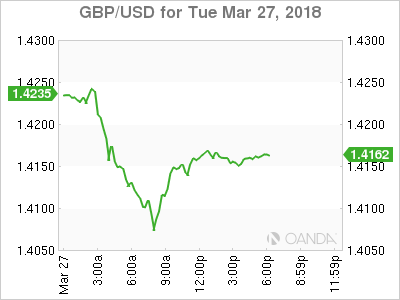 The pound rose after the UK and the EU reached a transition period of 21 months, the fact remains that there are still major hurdles before an actual deal is agreed. The UK so far has not proposed a deal that the EU would be quick to accept, which has kept the hard Brexit scenarios (and pound softness) alive.

Oil Retreats Ahead of US Weekly Stock Data

Energy prices fell on Tuesday after the US dollar rebounded ahead of the US GDP release on Wednesday. The strong dollar put a downward pressure on West Texas Intermediate that trades at $64.62 before the release of US weekly stocks. The Energy Information Administration (EIA) will publish the weekly data at 10:30 am EDT. The forecast calls for a rise of half a million barrels as US production ramps up. 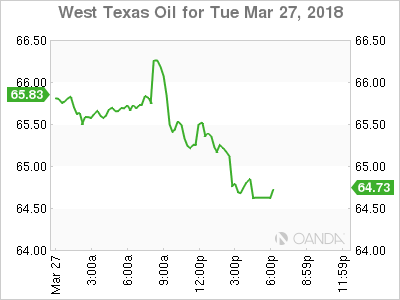 Earlier today Crown Prince Mohammed bin Salman said that the Organization of the Petroleum Exporting Countries (OPEC) and Russia is working on a collaboration agreement that could be 10 or 20 years. The current oil supply agreement between the OPEC and other major producers brought stability to oil prices. Disruptions via weather or geopolitical have supported higher prices but the looming threat of higher US production remains constant.

Market events to watch this week:

GBP/USD grinds lower despite picking up bids to 1.3250 during Wednesday’s Asian session. The cable pair remains pressured for the last one week around the 20221 bottom. In doing so, it forms a bearish chart pattern called pennant and keeps the sellers hopeful. Also favoring the bears is an absence of the oversold RSI.

Uniswap at risk of 35% correction

Uniswap price sits atop one of its final price support zones before a significant sell-off will likely occur. Despite having recovered over 33% of its flash-crash losses, buyers appear to be abandoning Uniswap in the interim. Extremely bearish conditions across the board.