For as long as anyone can remember, the United States has dominated world trade. The dollar is the currency flowing through the world of commerce and oiling the wheels of business across the globe.

China has, in recent times, begun to unsettle this monopoly. The vast communist country, with capitalist leanings, is flexing its muscles and looking to expand its influence and financial clout to an ever greater degree.

In this video, we will look at the rapid development of crypto technology and how the Chinese have taken the initiative to extend their reach into areas that were unthinkable - even ten years ago.

Back then, crypto was in its infancy. Beyond a few visionary geeks and mathematicians playing with crazy ideas like digital currencies, nobody had heard of terms like “blockchain” and “crypto-mining.”

But then Bitcoin happened.

It exploded into the world’s imagination in 2017 by increasing its value by around 1,900% - you don’t get that in your average bank savings account, do you?

And that was it. The start of a journey into the world of digital assets became a race for domination by two entirely different financial systems and cultures. Driving change became the only goal.

In a recent report by the University of Cambridge Centre for Alternative Finance, China’s hashing power was 65% of the world total. The USA was second along with Russia – both at 7%. Kazakhstan, Malaysia, Iran, Canada, Germany, and Norway were the runners-up.

Interestingly, the EU countries accounted for just 3.5% combined – with the UK at .01%. 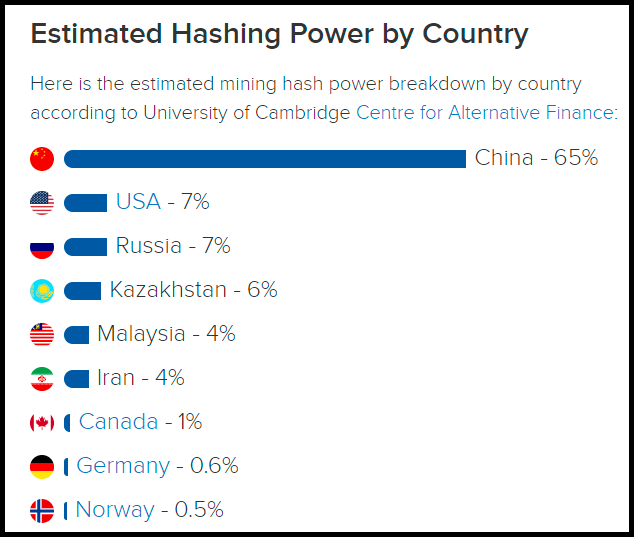 The question has to be, why?

One of the significant factors affecting any type of crypto mining is the cost of electricity. Electricity in China is some of the cheapest in the world - often subsidized by the state and produced by hydroelectric power stations in the country’s more remote areas, like Sichuan and Xinjiang. 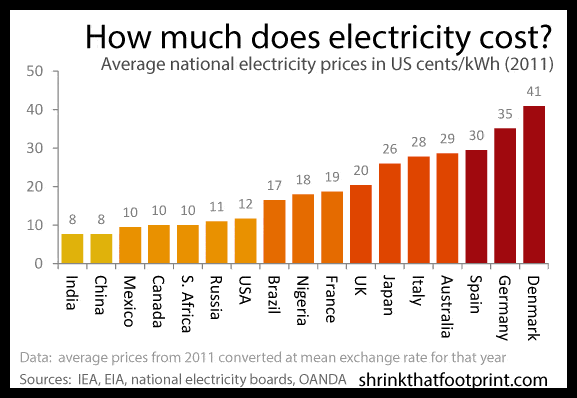 When mining is more difficult because more calculations have to be made, more computing power is needed, which means that more electricity is used. The countries to the right of the chart above cannot compete at the same level and make a profit – so many fall by the wayside - resulting in China being even more dominant.

In such remote areas, more electricity is produced than is needed by the local population, so there is an argument that it would be wasted if it were not used for something useful – like crypto mining.

The surplus of electricity is also a result of cheap coal supplies – not just renewables. A report by the Energy Information Administration showed that even by 2030, coal would account for around 75% of China's electricity production, with hydroelectric power accounting for 13%. 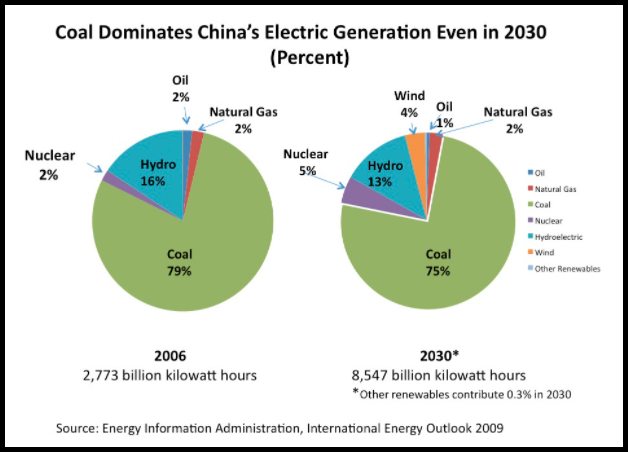 Mining pools are formed between miners who “pool” their resources. As a result, this pool has an improved chance of finding a block because the hash rate is combined. All who contributed are paid equally for their hash rate when the collective gets the block reward.

China has four of the five largest crypto mining pools, and miners outside of China are keen to join such pools due to their size. Solo miners prefer the tiny but consistent earnings of pooling rather than the unpredictable results and high risk of going it alone.

One of the most significant problems for China – and its Achilles heel – is all this mining power centralized under a communist regime. What if the government decided to interfere with the development of the blockchain or become a competitor by starting their own digital currency?

They are currently looking at this approach. If they decide to ban or restrict others, the knock-on effects would be catastrophic for crypto.

Bloomberg reported last year that the Chinese authorities were testing a new kind of crypto/digital currency in four cities. Their conclusion: China’s digital currency could challenge Bitcoin, the blockchain, and even the dollar over time.

So far, the United States has not followed the Chinese government’s lead. As far as we know, there are no plans to introduce a wide-ranging digital version of, or upgrade to, the dollar anytime soon.

Under the US system, private companies such as JP Morgan, Goldman Sachs, and even social media companies like Facebook are experimenting and testing different versions of tokens, coins, and blockchain technology.

Some of these ideas are looking fruitful – some, such as Facebook’s Libra, have a lot more work to do.

The US government is watching closely – especially the Federal reserve – to see whether this technology needs regulation and legislation.

The digital cash that China is developing is in electronic banknote form. It will exist on a smartphone, in a digital wallet, and in the same way current money is, the Chinese state would back its value.

Digital money would be a dream come true for the Chinese government because it would allow them an overriding control over the economy – with nowhere to hide cash – or to work “under the radar.”

Some, in China, speculate on whether individuals will be ranked according to their social creditworthiness if an electronic social-credit system emerges.

With WeChat and Alipay the dominant payment methods in China, any encroachment onto their territory will be viewed with suspicion. Independent cryptos like Ether and Bitcoin could be outlawed entirely in favor of a total rollout of the government’s digital unit.

A powerful alternative to the dollar, in digital form, could present real problems for the US. It would enable countries like Iran to bypass US sanctions and the current banking system by transferring currency across international borders.

There would be no way of interfering or stopping such dealings.

This would also be a problem with the regimes in Russia, North Korea, and other, so-called, pariah states.

At the same time, in introducing a new digital currency, the Chinese are afraid of the circumvention of capital controls that would enable people to move large amounts of money out of the country.

The Chinese increased the current controls after the exchange-rate devaluation of 2015. Da Hongfei, founder of the Neo blockchain network, suggests that the People's Bank of China could break some digital currency up for use outside China, like the currency trading version of the “offshore yuan.”

The PBOC will be able to track down where the money goes. Additionally, the PBOC has also noted that certain transactions may be limited in size or involve a meeting to authorize and schedule currency exchange.

Digital currency may help to raise awareness of China's currency to countries and individuals around the globe. Other countries could follow the China model, according to Matthew Graham, CEO of Beijing-based consulting firm Sino Global Capital.

This could see China having a first-adopter advantage which is then transformed into a network effect.

This situation leaves the United States with a problem.

Does it run headlong into adopting its own digital currency to beat the Chinese – even though the small print of the technology has not been rolled out yet? Or, does it sit on the sidelines watching to see the Chinese make mistakes - and then jump in with a superior system.

Silicon Valley, in California, is the historical epicenter of all things digital. It would be almost criminal to allow China to dethrone the world’s reserve currency system with an electronic pretender to the crown.

Who will blink first?

EUR/USD stable at around 1.1700, waiting for a fresh catalyst

The EUR/USD pair has spent most of the last trading session of the day stuck around 1.1700. Upbeat US Durable Goods Orders spurred modest demand for high-yielding assets.

Upbeat US data lifted the market’s mood and weighed on the dollar. US Treasury yields continue climbing to multi-month highs. XAU/USD is marginally higher on a daily basis but bears retain control.

Shibu Inu price continues to contract and cause frustration for bulls and bears. However, Shibu Inu is trading near the apex of the triangle pattern it is currently inside. Therefore, a breakout lower is likely to occur very soon.