The US Bureau of Labor Statistics (BLS) will release the August jobs report on Friday, September 3. Following an increase of 943,000 in July, investors expect Nonfarm Payrolls to rise by 750,000 and see the Unemployment Rate edging lower to 5.2% from 5.4%.

The monthly data published by the Automatic Data Processing (ADP) Research Institute revealed on Wednesday that employment in the private sector rose by 374,000 in July. This reading missed the market expectation of 613,000 by a wide margin and could be taken as a sign that the NFP could fall short of the market consensus as well.

After FOMC Chairman Jerome Powell refrained from delivering a timeline on asset tapering, the greenback came under strong selling pressure with investors starting to price in a possible delay to a reduction in asset purchases. A better-than-expected NFP print could revive expectations for the Fed to start tapering before the end of the year and trigger a USD rally. On the other hand, a negative surprise is likely to force the USD to continue to weaken against its major rivals.

In order to understand how impactful the US jobs report is on the USD’s market valuation, we analyzed the market reaction of four major pairs, EUR/USD, GBP/USD, USD/JPY and AUD/USD, to the previous 14 NFP prints. We omitted the older NFP figures because we believe the numbers registered during the coronavirus outbreak created extreme outliers and distorted the results.

The FXStreet Economic Calendar assigns a deviation point to each macroeconomic data release to show how big the divergence was between the actual print and the market consensus. The -3.51 deviation seen in April's NFP reading could be assessed as a relatively big negative surprise. On the other hand, February’s NFP print of 536,000 against the market expectation of 182,000 was a positive surprise with the deviation posting 1.76 for that particular release.

Next, we plotted the reaction, in terms of pips, of the major pairs mentioned above 15 minutes, one hour and four hours after the release to see if the general market view held.

There were seven negative NFP surprises and seven positive surprises in the previous 14 releases. On average, the deviation was -0.8 on disappointing prints and 0.65 on upbeat figures. 15 minutes after a negative surprise, the average gains in the EUR/USD, GBP/USD and AUD/USD were 19.4, 19.3 and 20.5 pips, respectively, while USD/JPY lost 15.8 pips. On the other hand, EUR/USD, GBP/USD, USD/JPY and AUD/USD rose 1, 6.4, 6.8 and 6.1 pips, respectively, on average following positive surprises. These findings suggest that investors are more likely to react immediately to weaker-than-expected NFP prints rather than strong ones. 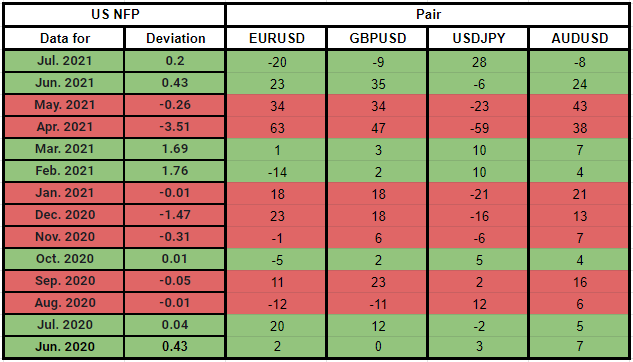 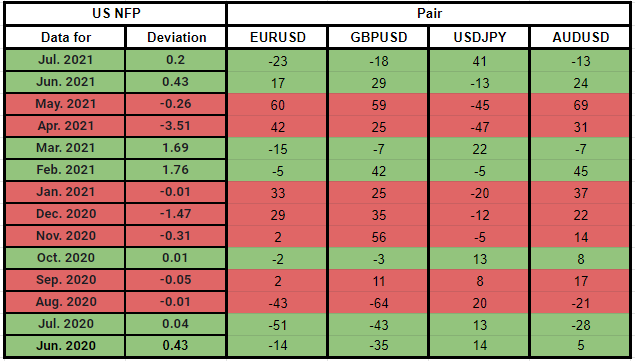 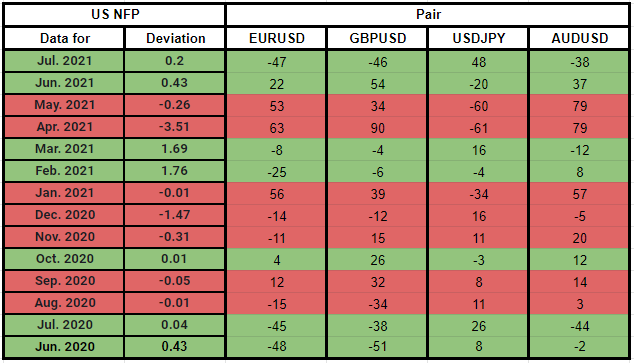 EUR/USD has a correlation coefficient of -0.77, -0.46 and -0.47 15 minutes, 60 minutes and 240 minutes after the release, respectively. These numbers suggest that the impact of the NFP deviation on EUR/USD fades away following a strong reaction initially.

To summarize, a negative NFP surprise triggers a stronger market reaction than a positive one in EUR/USD, GBP/USD, USD/JPY and AUD/USD pairs. There is a significant correlation between the NFP deviation and pip-change in these pairs immediately after the data release. One hour later, the correlation weakens noticeably in these pairs with the exception of USD/JPY. Four hours after the release, it's difficult to draw a connection between these pairs' movements and the NFP reading.

Gold price extends losses amid resurgent US dollar demand. Market sentiment sours ahead of the critical US macro data. Falling US Treasury yields could help put a floor under gold price.