At the time of the wars of independence from Spain in the early 1800’s Uruguay had originally been a province of Argentina (it had been part of the Vice Royalty of La Plata) but this was contested by Brazil until in 1828, through pressure from Britain, the Treaty of Montevideo was signed which recognised Uruguay as an independent state.

Uruguay is mostly an immigrant country, principally from Spain and Italy, with a small mestizo population. Early in the 20th century Uruguay was a wealthy supplier of beef and wool to the developed countries in Northern Europe. Following the 1929 Wall Street crash and world recession demand for it’s exports collapsed and, like it’s neighbours it started to pursue industrial policies based on the import substitution model. However due to it’s small population size the limits of expansion under this model were reached quite early. There was a recovery in exports during World War II but this was temporary and in the 1950’s as prices dropped the economy suffered a major contraction.

In the post war period the Presidency of Uruguay was dominated by the Colorado party until in 1973 a joint civilian-military government was formed. This was partly a response to the activities of the Tupamaros rebels who engaged in acts of violence to overthrow the regime. The repressive nature of this regime bears some resemblance to the military dictatorship in Argentina from 1976-83 and was responsible for scores of disappearances.

Civilian Rule was restored in 1985 and Uruguay has had regular transition of power at five year intervals since then. From 1974 to 1982 Uruguay, like it’s Latin American neighbours, had availed of international borrowings to finance it’s growth and when this dried up in 1982, following Mexico’s default, it suffered a major contraction. Uruguay had recourse to the IMF but, unlike it’s neighbours, did not default and from 1989 onwards was able to take advantage of Brady Plan relief to make it’s servicing burden more manageable. 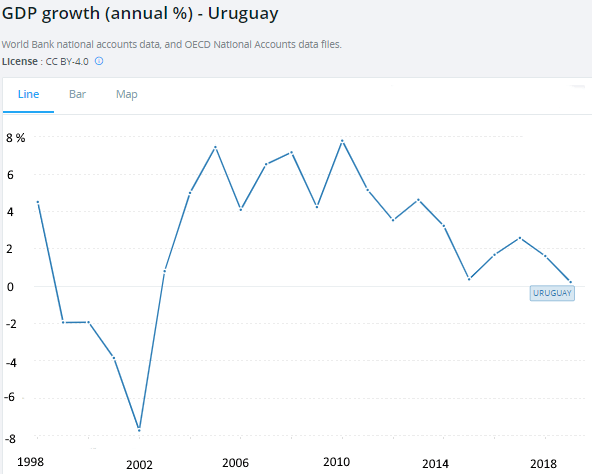 Growth resumed in the 1990’s but there was another major downturn at the turn of the Millennium as can be seen on the chart due to recessions in Argentina and Brazil. Uruguay trades more with Brazil but welcomes more tourists from Argentina.

It can be seen that the overall level of merchandise exports is relatively modest at US$9bn a year and is dominated by primary products. China and the EU have emerged as the largest export markets as the relative importance of Brazil and Argentina declines. Were Argentina and Brazil to become reliable trading partners then these would be Uruguay’s natural markets but as these two countries wrestle with their own internal issues the promise of Mercosur as a trading block remains for now in the future.