UK inflation rose to a fresh 40-year high at 9.4% - no wonder the Bank of England governor, Andrew Bailey, was yesterday chirruping about a 50bps hike at the next meeting. And with energy prices to rise again in the autumn, the peak has not been reached yet. GBPUSD trades a little lower but holds 1.20 for now. Truth is the BoE has been too slow to react and too complacent about inflation. It’s like toothpaste, remember. 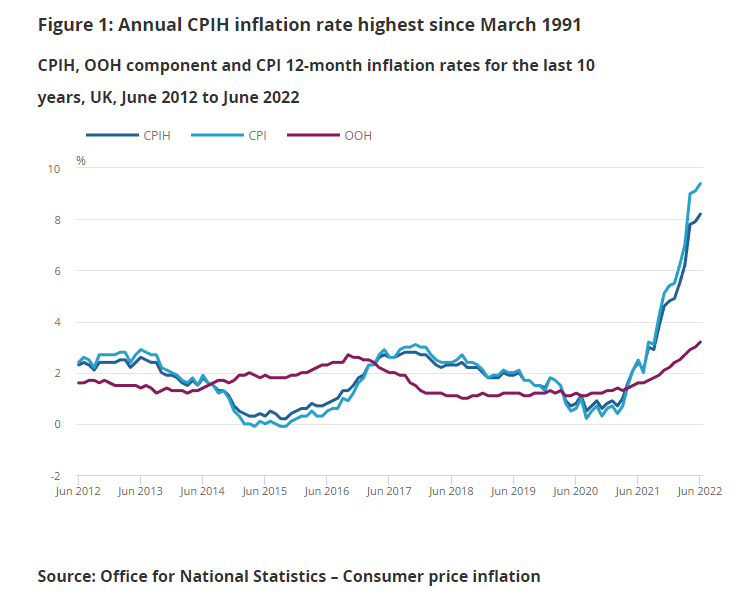 Morgan Stanley on sterling: “We continue to expect GBP/USD to trend lower, driven chiefly by broad-based USD strength but, on the GBP leg, we think a lot of the bad news is now in the price. Low prospects of a near-term fiscal boost means UK growth would remain lacklustre for the rest of this year, limiting the BoE's ability to tighten materially. That said, this is not new news. The BoE was one of the first few G10 central banks to warn of the risk of a recession.

"Low UK growth expectations, the broader dollar and the risk backdrop remain key drivers of GBP/USD, and are all pointing to a weaker GBP. That said, this is not new news, and we think GBP could outperform some of its European peers, with EUR/GBP likely to stay weak from here."

Meanwhile in Europe the European Central Bank meets tomorrow – expected to raise rates by 25bps but a report doing the rounds yesterday indicated 50bps is live and market pricing adjusted to almost fully price this in. This sent the euro, already on the rebound, higher still as EURUSD moved to 1.0270. I don’t believe the ECB has the cajones to do anything abrupt that it has not already signalled – though it should of course.

European stock markets took the strong handover from Wall Street and ran with it in early trading on Wednesday. Not massive gains but the FSTE 100 is back above 7,300 to its best since the end of June; the DAX rallied to its highest since the middle of that month. News that Russia appears to be restarting Nord Stream 1 is fuelling hope that Europe will avert a gas crisis this winter...but Gazprom has still declared a force majeure, so it’s anyone’s guess. Oil trades a little lower following API inventory data showing a build of 1.86mn barrels last week, with gasoline stocks up 1.29mn barrels following a 2.9mn build in the prior week, suggesting US demand could be falling.

Bottom in? US stocks surged with just about every stock on the S&P 500 green as investors seemed to decide the bottom could be in and less-bad-than-feared corporate earnings will deliver a boost. The Nasdaq rallied 3%, the S&P 500 rose 2.76% and the Dow Jones put on more than 750pts amid broad-based gains. My feeling is that companies are managing inflation pretty well so far, as is the consumer, but how long does this last?

Netflix earnings – lost one million subscribers but that was half what management had guided so investors liked the results, with shares up 8% in after-hours trading, building on a 5.6% gain in the normal session. The company also said it aimed to launch its lower-cost, ad-supported service in early 2023. Good business, good sustainable earnings, just not super-growth stock anymore, PE of 19 seems reasonable enough now.

Twitter – the Delaware judge agreed to an expedited trial – make no doubt the law is on the side of Twitter. Musk is going to lose this for all the reasons we have detailed here before. Question remains whether Twitter gets ‘specific performance’, can the judge enforce it on Musk if it does, or will Twitter accept damages instead?

Tesla reports tonight. With money furnaces for factories, a tough quarter for Tesla seems assured. Layoffs and supply chain woes suggest it’s not been a record-breaker. Tesla announced weaker-than-expected second-quarter vehicle deliveries of 254,695, its first sequential quarterly decline in two years, well below the 310,000 vehicles delivered in the first quarter. US sales fell 18.3% to 131,449 units in the second quarter, according to figures from Autodata. Meanwhile the AI boss has left just as FSD is meant to be ready...Shares are down 38% YTD, but have added 17% since bottoming in June...More importantly if Musk thinks the Delaware court is going to find against him you should watch for him dumping a lot more Tesla stock in the coming weeks, if not days.