The UK High Court ruling on 3rd November 2016 helped bolster the Pound against all currencies. They ruled that the UK Parliament must hold a vote on whether the UK can start the official process of leaving the EU. The UK government was disappointed with the ruling and will appeal to the Supreme Court in early December in a bid to be able to trigger Article 50 without the need for such a vote.

Nonetheless, UK Prime Minister, Theresa May, has told European Commission President, Jean-Claude Juncker, that she’s intending to stick to her March 2017 deadline for triggering Article 50 and is determined to do so after 17.4 million people voted for Brexit in the UK EU Referendum – the biggest mandate in UK history. There may be months and months of delays, should the December appeal fail, but the reality is that the majority of MPs are likely to vote for Article 50, as the majority of their constituents are pro-Leave.

Following this flurry of activity, the Pound saw its sell-off peter out last week and the quarterly inflation report from the Bank of England on Thursday 4th November also helped support the Pound as it heads into the week of the US presidential election. The Bank of England raised its UK economic growth forecast from 0.8% to 1.4% for 2017; citing stronger consumer confidence and business investment than they had previously expected in the immediate aftermath of the Brexit vote. There was also a large jump in the consumer inflation expectations, from 2% to 2.75% in 2017 and 2.4% to 2.7% in 2018, which will put pressure on the UK central bank to increase interest rates over the coming years. Bank of England Governor, Mark Carney, commented that the next move in interest rates could be in either direction, which was seen as more hawkish compared to the previous month’s statement.

This week, the Reserve Bank of New Zealand (RBNZ) has their interest rate announcement and it’s expected that they’ll cut interest rates to 1.75%. Governor Graeme Wheeler intimated that further monetary easing was on the cards at the last meeting, so the cut will be largely priced into the value of the NZ Dollar. A suggestion of further interest rate cuts in the future should lead to a selloff for NZD. If the statement turns out to be more neutral than this, then expect the New Zealand Dollar to strengthen.

Technically, GBP-NZD exchange rate has been trading in a relatively narrow range for the last few weeks. Sterling support will be seen at 1.6930 and GBP sellers will be targeting resistance at 1.7160. This very tight consolidation isn’t sustainable.  So a breakout is likely on the cards. A break above 1.7160 should open up a move to 1.7300 initially. These w2ould both be good targets for NZD buyers. On the downside, 1.6800 is be the initial focus and that is a good level for GBP buyers. Anything outside these ranges would change the medium term outlook and we would look to new levels. 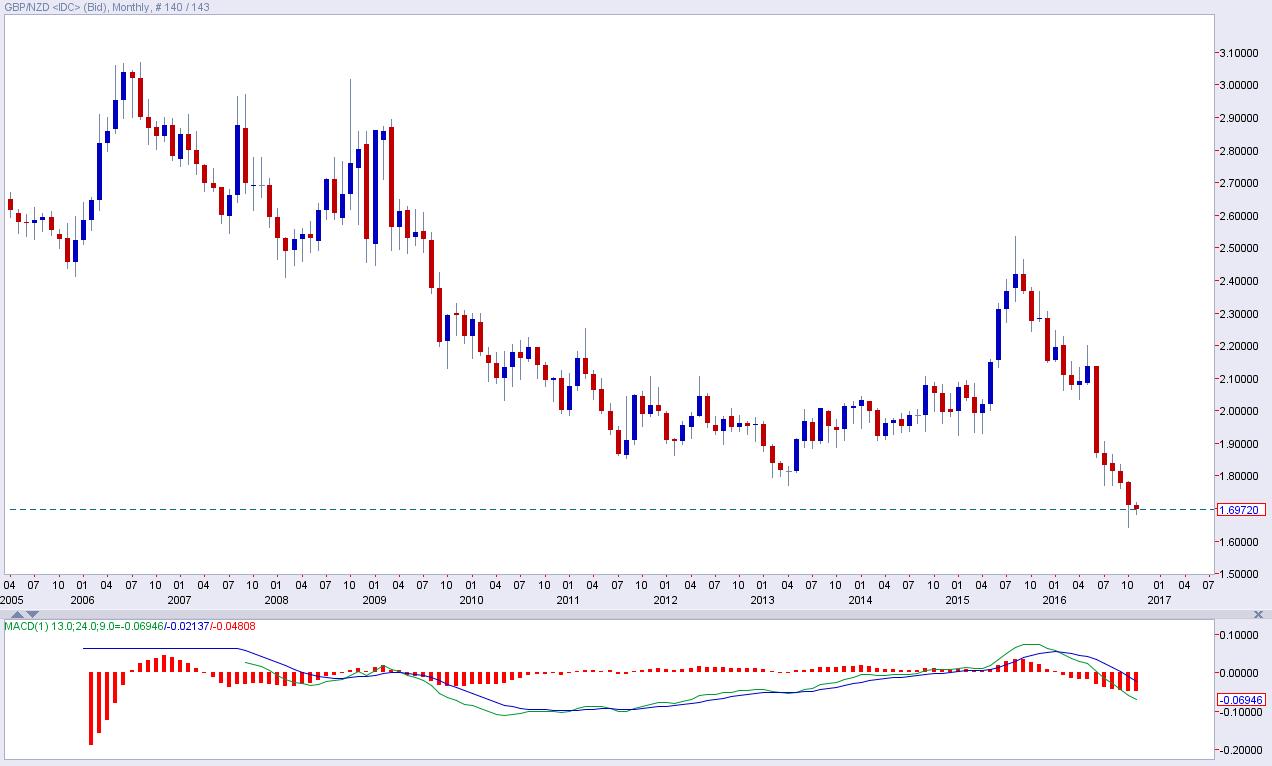