The UK economy was one of the hardest hit by the pandemic but we think the economic outlook looks bright. The relationship between new cases and hospitalisations have weakened significantly and the economy is fully re-opened. Consumer and business confidence are high.

We expect the unemployment rate will be back below 4% by the end of 2022.

Bank of England is moving gradually in a more hawkish direction. We expect the Bank of England will end QE this year (perhaps even prematurely) but not hike until H2 22.

Looking at the UK economy, the UK was one of the hardest hit countries by COVID-19 but things have improved a lot since then. There has been a lot of focus on the UK over the past month due to the delta variant, but new cases have started to move lower again, although we do not know the full implications of the re-opening of nightclubs etc. Regardless, the good news is that the relationship between new cases and hospitalisations/deaths has weakened a lot due to vaccines, which is also the main reason why the UK government decided to move on with the full re-opening.

The UK strategy has changed significantly, as the idea now is that people should learn how to live with the virus instead of imposing restrictions, helped by the vaccines. 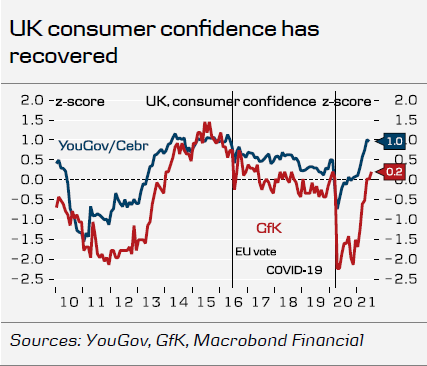