"I'm very uneasy about the inflation situation" – these words by Bank of England Governor Andrew Bailey have been reverberating through investors' minds ahead of the inflation release for October. They have also been setting a high bar to surpass – and that bar is already high at 3.9% YoY.

It is essential to examine another remark Bailey made to MPs on Monday. The governor said that the labor market is tight, and less than 24 hours later, markets learned that Britain's unemployment rate dropped to 4.3% in September, better than expected. Jobless claims also surprised, falling in October – despite the expiry of the furlough scheme.

Did Bailey hint at high inflation? Even if the BOE Governor is not privy to the Consumer Price Index figures, his words raised expectations. They had already been conditioned by America's 6.2% CPI rate last month, the highest since 1990.

The economic calendar is pointing to an increase of 3.9% YoY in headline inflation, the figure most relevant to Britain and to pound traders. That would be a leap from September's 3.1% and almost certainly cement a rate hike in December. Bailey said that this month's decision to leave borrowing costs unchanged was a "close call." 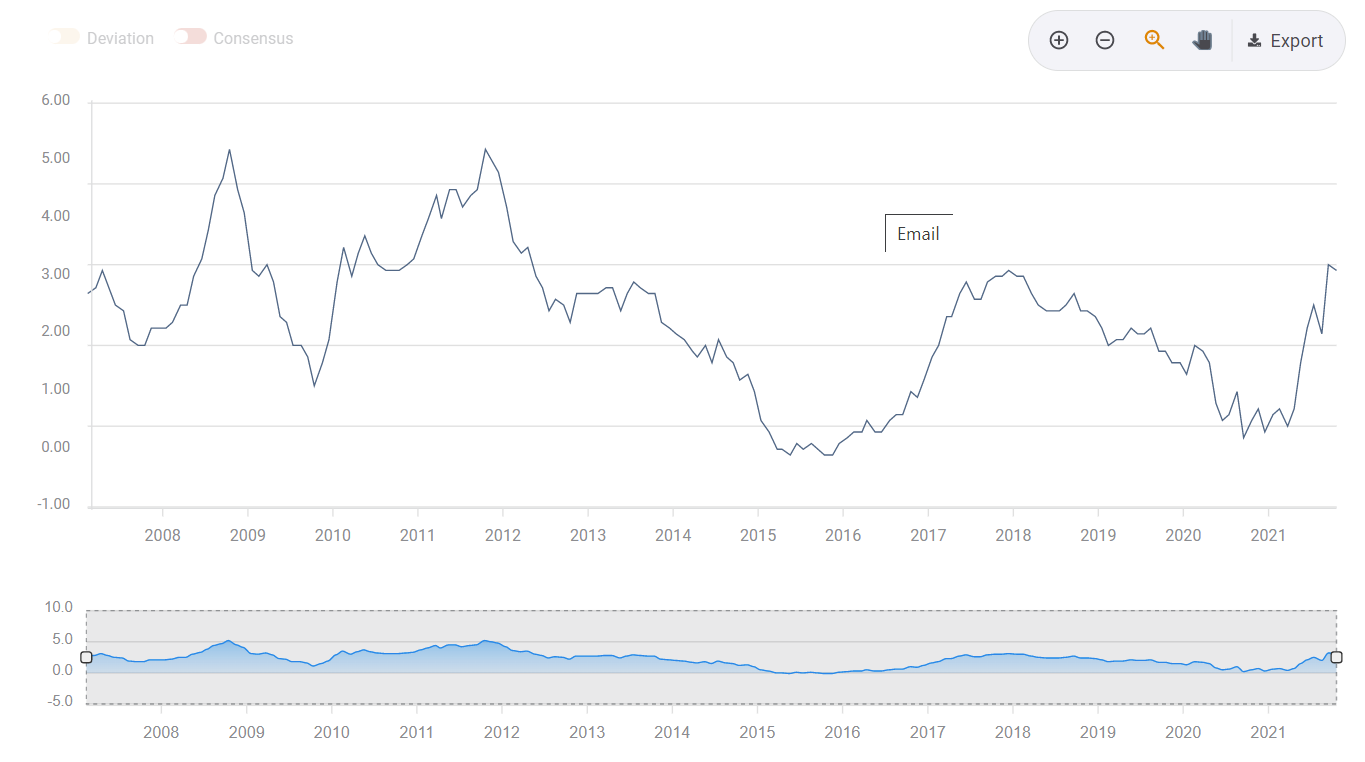 How much of a rate hike is priced in? Most of it, and that implies a low bar for the pound to go lower.

1) Within expectations: A read of anywhere between 3.6% to 4.4% could be considered a figure that meets estimates. The wide range stems from the significant increase in expectations for this publication and from America's big inflation leap. Rising prices mostly stem from global energy and supply chain issues.

In such a scenario, GBP/USD could suffer a "buy the rumor, sell the fact" response in which traders take profits on gains already made on GBP/USD. The move may be limited, as it would still represent a substantial increase in inflation.

2) Above estimates: Soaring inflation could be considered 4.5% for this release. It would mean that the BOE's forecasts of headline CPI reaching 5% in April would be seen as too modest. In such a case, the BOE could follow December's potential hike with another one soon after. Another option would be a shocking increase to 0.50% instead of 0.25% to provide an instant answer to rising prices.

In that scenario, GBP/USD could "buy the rumor, buy more on the fact," extending its gains and more than recovering recent losses.

3) Below estimates: If inflation rises but only up to 3.5% YoY, it would be a modest increase that could cast doubts on a BOE rate hike in December. While any CPI level that exceeds the 1-3% band seems like a reason to act, Bailey has already proved he can be an "unreliable boyfriend," a nickname stuck to his predecessor Mark Carney.

GBP/USD would tumble in such a scenario, shedding its hard-fought gains, and then some more.

UK inflation has probably jumped in October, and the publication would cement a rate hike by the BOE. However, most of that is already priced into GBP/USD, leaving room to the downside.