U.S. President Donald Trump said on Wednesday his life would be easier if he had not mounted a trade war with China but said “I am the chosen one” to take on Beijing.

Yesterday, the chosen one said he was Considering Options to Spur the Economy.

President Donald Trump said he can cut taxes by indexing capital gains to inflation without congressional approval, a move the White House has been considering for months that would largely benefit the wealthy.

“We’ve been talking about indexing for a long time,” Trump told reporters at the White House on Tuesday. “And many people like indexing and it could be done very simply. It could be done directly by me.”

This was despite the fact the "economy is very strong" 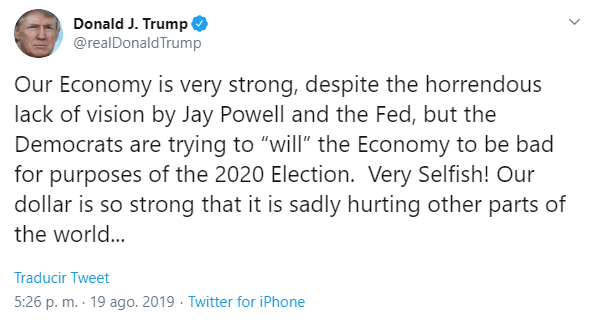 “I’m not looking at a tax cut now,” Mr. Trump said in comments to reporters on the South Lawn of the White House. “We don’t need it. We have a strong economy.”

Full Circle in a Day

Well, that took all of one day to go full circle.

Economy So Strong That

The economy is so strong that Trump continually heaps more pressure on Powell to cut rates. 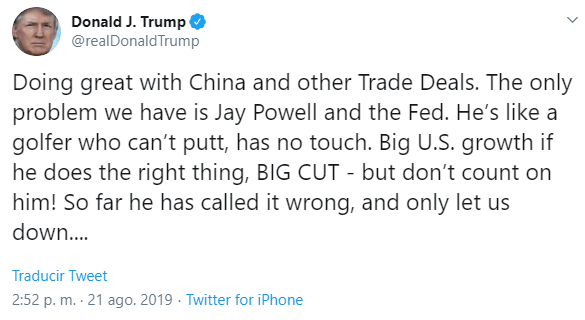 Please note that the US is "Doing great with China and other trade deals".

We have been doing "great" with China on and off for at least a year. Today, I see things are "great" again. How refreshing.

Things are going so well with Japan that it will now take huge tariff cuts by Japan just for the US to break even with where we could have been relative to Australia and Canada.

Doing great with China is of course expected.