The Trump team present a fiery defense against potentially damaging allegations over its conduct, appealing to their loyalist following with a focus on repealing Obamacare, building a wall, attacking the media, and accusing intelligence agencies of Gestapo tactics. The Theatre generated volatility and a further correction in the USD, creating doubts over the capacity of the next presidency to deliver on tax reform and infrastructure spending that might boost US  growth.  Gyrations may also have been exacerbated by recent efforts by China to reduce capital outflow that might be supporting US Treasury bonds, boosting Chinese commodity futures and weakening Bitcoin.  Meanwhile, stronger economic growth indicators in the US and abroad, higher inflation readings in China and rising market-based inflation expectations suggest upward pressure on global yields and the USD should resume before long.  US PPI, retail sales and University of Michigan surveys of consumer sentiment and inflation expectations before end-week may provide support for yields and the USD.

There was significant volatility in several markets in the lead up to and during the Trump news conference on Wednesday.  This may reflect two aspects: 1. allegations of potentially illegal and immoral actions made against the Trump election campaign team. 2. The lack of discussion on growth related policies by Trump in the press conference; instead he implied priorities are repealing and replacing Obamacare and building a wall on the Mexican border. Both may be substantial distractions for Congress and delay progress on more growth-supportive policies such as corporate tax reform and infrastructure spending.

The market may also have been unsettled by the aggressive nature by which Trump dealt with the media and intelligence agencies over the revelations that he was presented with an intelligence briefing including a dossier outlining unverified allegations reported in full on BuzzFeedNews.

The allegations, unverified and obtained from a private company specializing in intelligence gathering, claim that the Trump campaign team colluded directly with Russian officials to undermine the election campaign of his opponent via hacking and release of damaging material, and trolling on news reports. They also claim that Russia has damaging information about Trump-related to sexual acts and financial dealing that could be used to Blackmail the incoming President.

Both Trump and Russia have denied the claims.

Trump described the reporting of the intelligence briefing on Twitter and in the news conference, several times, as “Fake New” (attempting to tarnish it with the brush of actual fake news that was propagated on social media during the election campaign).  He also aggressively attacked BussFeedNews and CNN for reporting on its existence and accused US intelligence agencies for leaking it.

He reverted to a well-established tactic of attempting to discredit CNN as dishonest and on an agenda to damage his presidency.  In a confrontational manner, he refused to take questions from CNN, even though it only reported on the existence of the intelligence briefing and not its content.  Of course, every news service is now covering the development.  At the beginning of the Press briefing, Trump added weight to his claims of dishonesty against CNN by thanking other media services for not breaking the story.

The Trump press conference was opened by incoming White House Press Secretary Sean Spicer and Vice President Pence that both strongly criticized the news agencies for reporting on the intelligence briefing containing the alleged and unverified material.

Overall this press conference event failed to meet expectations that Trump might invigorate confidence in achieving stronger growth in the USA, although he did reiterate a claim he made during the election campaign that he would be the “greatest job producer God ever created”.  On the whole, he appeared to focus on many of the more contentious policy agenda items that fire up his loyalist voters in an attempt to misdirect attention away from the news storm over salacious allegations.

Whether any of this latest Trump saga has any lasting impact on the market remains to be seen.  It seems unlikely that the allegations will go anywhere.  Apparently, knowledge of the dossier created by a private company has been around for months in Washington.  The contents have never been verified and have been described as unverifiable.  If Russia has damaging information on Trump it is unlikely that it will release it, now made more unlikely since Russia has denied having such information.

In the end, this may well be a distraction that has distorted market trends rather than the start of anything bigger.

There may well be another factor contributing to the correction in the USD this year.  In conjunction with a corrective fall in the USD so far this year, US Treasury yields have fallen significantly, Bitcoin has collapsed, CNY has been volatile, and commodity futures prices have jumped.

All of these moves may relate to Chinese government efforts to clamp down on avenues for capital outflow.  After a period of rapid rise in the USD, US yields, and a weaker CNY since the 8 November election, these markets may also have been vulnerable to corrective price action early this year.

The collapse in Bitcoin may reflect Chinese government efforts to monitor Chinese Bitcoin exchanges to discourage its use as an avenue to exit CNY and avoid capital controls.  Treasury bonds may have recovered to some extent since tightening capital controls reduces China’s need to sell FX reserves (including USA Treasury bonds) to defend its currency. The resurgent iron ore, steel, and coal futures prices traded on Chinese exchanges may reflect efforts by Chinese traders to exit CNY exposure in response to tighter capital control enforcement. 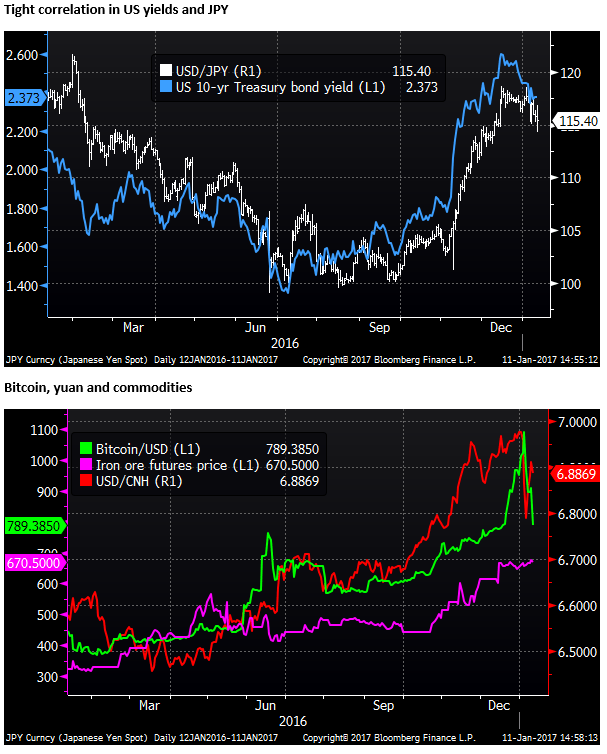 Out of line with fundamental developments

Overall it appears that there are a number of market gyrations that have little relation to economic fundamentals.  There is still more reason for bond yields to be rising rather than falling.

Inflation and sentiment survey data in the Eurozone have picked up this year.  UK manufacturing production continued the recent trend of stronger than expected outcomes.

Chinese PPI inflation and non-food CPI inflation indicators were strong, suggesting China, via its rapid rebound in commodity prices in the last year, may be contributing to global inflation trends. 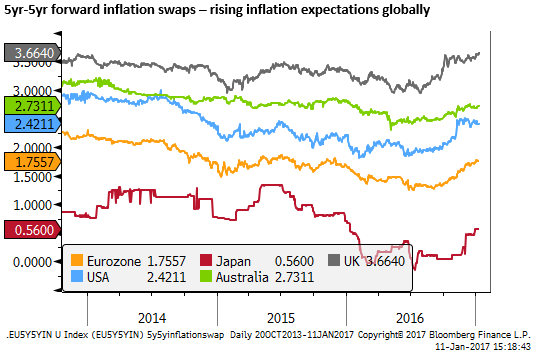 These factors are likely to reassert upward pressure on global bond yields, and rising relative real interest rates in the USA, where rate hikes are more likely to be implemented, supporting the USD.

Before the end of the week, it will be interesting to see if USA PPI, retail sales and University of Michigan Consumer Sentiment Survey (including inflation expectations) reassert the rising trend in USA yields and the USD.