As expected, the FOMC made no major policy changes at today's meeting. That said, the committee did note that the recovery has moderated in recent months and stressed that the outlook remains critically dependent on the course of the virus. In our view, the FOMC is more likely to provide “too much” accommodation in coming months rather than “too little.”

No Major Changes from the FOMC Today, as Expected

As widely expected, the eleven voting members of the Federal Open Market Committee (FOMC) decided unanimously today to make no changes to the Federal Reserve's current policy stance. The Fed will keep its target range for the federal funds rate between 0.00% and 0.25%, and it will continue to purchase Treasury securities and mortgage-backed securities (MBS) at a monthly rate of $80 billion and $40 billion, respectively. There has been speculation among some market participants that the committee may soon announce plans to “taper” its asset purchases, but there was no mention of “tapering” in today's statement. Rather, the committee reaffirmed that the Federal Reserve will continue to purchase assets at the current monthly rate (at least) “until substantial further progress has been made toward the Committee's maximum employment and price stability goals.”

The only notable change to the policy statement today was that the committee downgraded its current assessment of the economy. Specifically, the FOMC noted that “the pace of the recovery in economic activity and employment has moderated in recent months, with weakness concentrated in the sectors most adversely affected by the pandemic.” Indeed, non-farm payrolls declined by 140K in December, which was not yet known to the committee at the time of the December 16 FOMC meeting. Furthermore, job losses in December were concentrated in the leisure & hospitality industry, which has been severely impacted by the pandemic. We expect that real GDP grew roughly 4% at an annualized rate in Q4-2020 (data will be released tomorrow morning), but we also know that the fourth quarter ended on a soft note. In that regard, we look for real GDP to be more or less flat in the first quarter of 2021 before strengthening later this year as vaccines become more widely deployed (Figure 1). 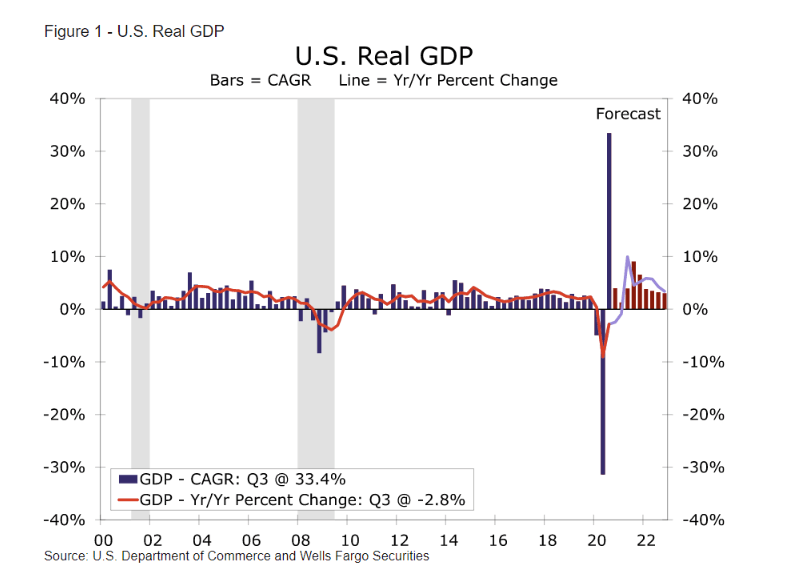 FOMC to Remain Accommodative for the Foreseeable Future

Obviously, our view is predicated on the assumption that the pandemic does not spiral out of control in coming weeks and months and that vaccine deployment ramps up. In that regard, the FOMC noted that “the path of the economy will depend significantly on the course of the virus, including progress on vaccinations.” In our view, the FOMC will be more likely to provide “too much” monetary accommodation rather than “too little,” at least until signs emerge that a self-sustaining recovery truly has taken hold.

In short, we expect the FOMC to maintain its current target range for the federal fund rate between 0.00% and 0.25% through at least the end of 2022 (the current end of our forecast period). We also look for the Fed to continue purchasing Treasury securities and MBS at their current pace through the end of 2021. In sum, the U.S. economy likely will remain in a low interest rate environment for the foreseeable future.