The yield on the 10-year Treasury note has traded below the yield on the 2-year note. But the underlying fundamentals of the economy are generally sound. Could we "talk ourselves" into recession?

Does Inversion of the Yield Curve Signal Imminent Recession?

The financial media is abuzz with the news that the yield on the 10-year Treasury security has traded below the yield on the 2-year security. In the past, this inversion has been a reliable indicator of recession (top chart). Is a downturn looming? 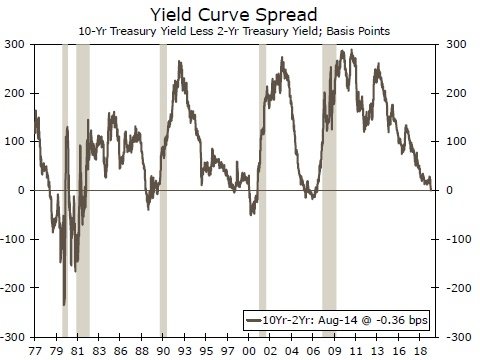 We addressed this issue in a report we wrote in March when the yield on the 10-year note fell below the yield on the 3-month T-bill. At the risk of making the mistake of claiming that "it's different this time," the yield curve at present may not be quite as reliable as a recession predictor as it has been in the past. As we wrote in our March report, the purchases of Treasury securities that the Fed undertook as part of its quantitative easing (QE) program collapsed the term premium on long-dated Treasury securities (middle chart). The Fed is still holding over $2 trillion of Treasury securities on its balance sheet, so the yield on the 10-year note at present is arguably ¼ percentage point to maybe as much as 1/2 percentage point lower than it otherwise would be. In other words, the yield curve may not be inverted at present if not for the Fed's QE purchases. 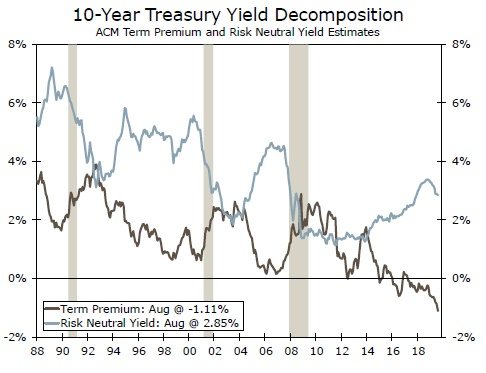 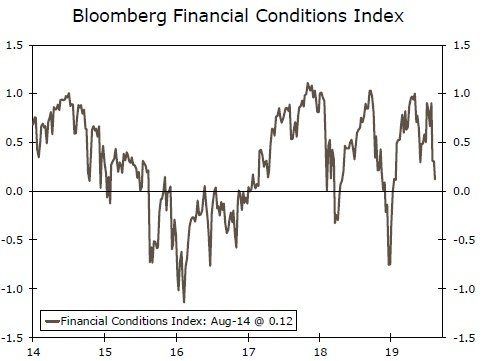 But there is plenty of uncertainty in the air. There are ongoing trade tensions between the United States and China, and the protests in Hong Kong could potentially lead to military intervention by China. The United Kingdom could crash out of the European Union on October 31. These uncertainties could potentially weaken business fixed investment spending even further. If businesses also start to pare payrolls—there is no evidence to suggest that they are doing so at present—consumer spending, which has been strong, could also weaken.

We currently forecast that the economic expansion, which is now in its 11th year, will continue through at least the end of next year. (See our Monthly Economic Outlook for details.) But we readily acknowledge that the uncertainty noted above clouds the outlook. We could conceivably end up "talking ourselves" into a recession. In the immortal words of President Franklin D. Roosevelt "the only thing we have to fear is fear itself."