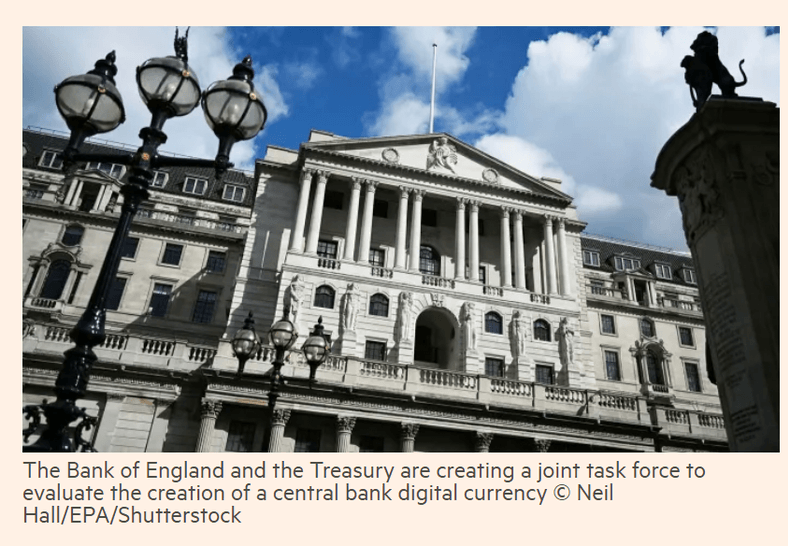 Central bank digital currencies are coming and likely sooner than most expect.

About a year ago the Bank of England released a paper on the Opportunities, Challenges, and Design of Central Bank Digital Currencies.

The idea that one can future proof fiat currencies against anything is of course ludicrous.

British finance minister Rishi Sunak told the Bank of England on Monday to look at the case for a new “Britcoin”, or central bank-backed digital currency, aimed at tackling some of the challenges posed by cryptocurrencies such as bitcoin.

A BoE-backed digital version of sterling would potentially allow businesses and consumers to hold accounts directly with the bank and to sidestep others when making payments, upending the lenders' role in the financial system.

"We're launching a new taskforce between the Treasury and the Bank of England to coordinate exploratory work on a potential central bank digital currency (CBDC)," Sunak told a financial industry conference.

"The Government and the Bank of England have not yet made a decision on whether to introduce a CBDC in the UK, and will engage widely with stakeholders on the benefits, risks and practicalities of doing so," the BoE said.

What About Physical Cash?

The BoE said a digital version of sterling would not replace either physical cash or existing bank accounts.

Governments will know where every penny is coming from and going to and tax everything.

They will sell this scheme as a necessity to combat drugs, tax evasion, and a necessity for fairness.

Once in place, if governments ever decide people are "hoarding" money they will consider putting time limits on it to force people to spend it.

That's what's coming. And the pace seems to be picking up. No one wants China to be the first.

EUR/USD drops below 1.2100 as US dollar resumes upside

EUR/USD is trading below 1.2100, paring back gains amid resurgent US dollar's demand, as the market mood remains sour. Mounting inflation concerns after the US CPI surprises continue to weigh on the risk appetite. US data awaited.

Dogecoin price plunged by over 25% in the past 24 hours, reaching a low of $0.38. DOGE fell in tandem with the rest of the crypto market following Elon Musk's announcement that Tesla is suspending vehicle purchases using Bitcoin.

On Wednesday, the Dow fell 1.99% to register its largest single-day loss since January, wiping out all of its month-to-date gains, while the S&P 500 and the Nasdaq dropped by more than two percent respectively.