For the week we expect a retracement to at least 7,220.

Positive week for the British index which managed to break the previous resistance, now support, at 7,330.

We believe that this additional momentum is more due to the sharp depreciation of the GBP/USD rather than to an actual recovery in the strength of the index.

MACD and RSI remain very extended to the upside and looking at previous swings a retracement in the short term would be more than physiological, to also avoid overbought situations.

By expecting a recovery in GBP/USD combined with an over-extension in the MACD and RSI indicators, we are in favour of a retracement at least to 7,220 to then continue higher. 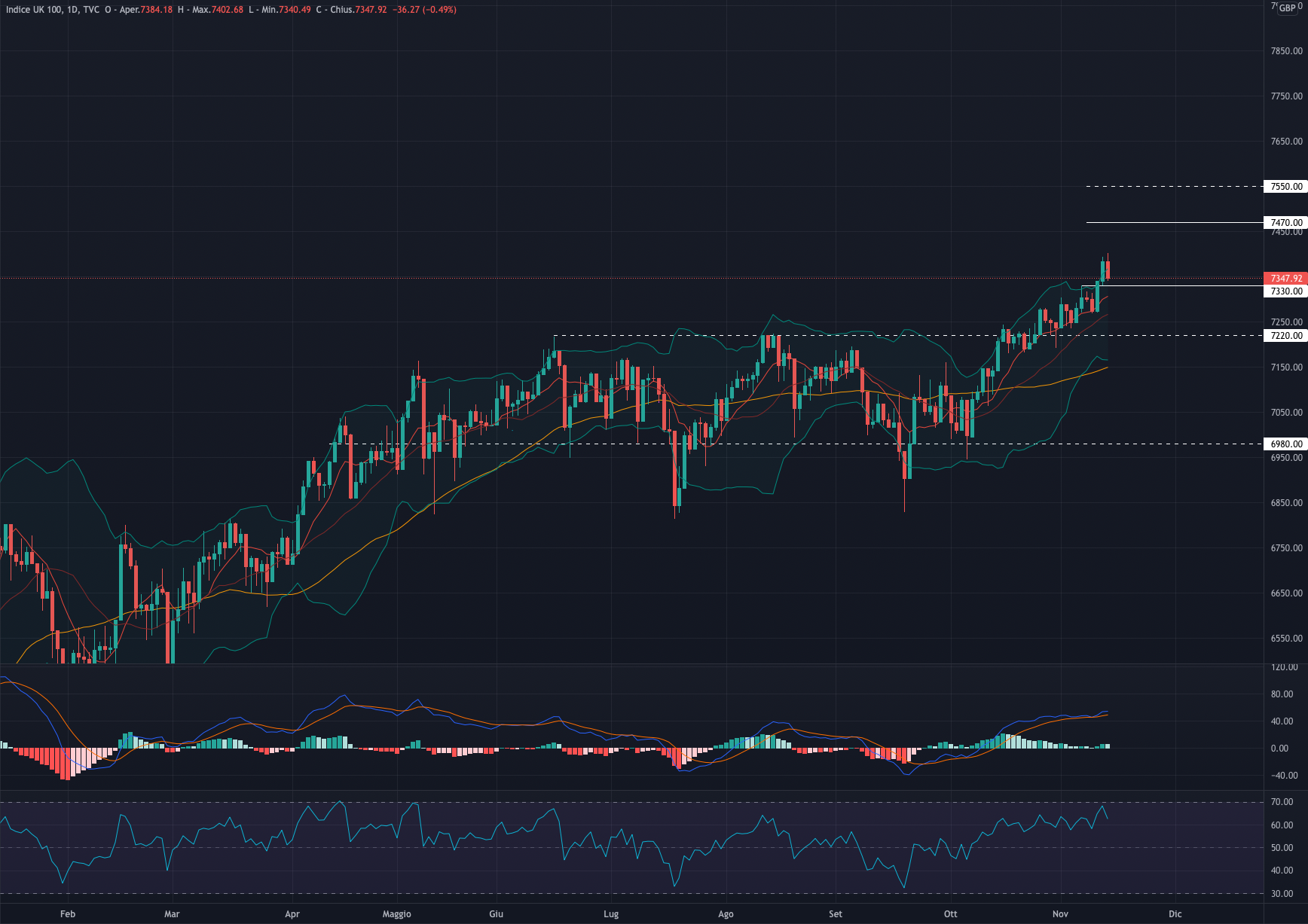 For the week we remain in favour of a retracement to 27,300.

After retesting the 9MA, the index reversed upwards in what, in our opinion, could end in a "double bottom" at 27,870.

MACD despite the price recovery of the last few days continues to signal a loss of momentum, combined with an RSI still overbought.

The trend of the Italian index remains bullish but we believe the price is at the moment it is overbought, limiting the opportunities for long positions. In addition, there is a considerable distance from the 50MA. 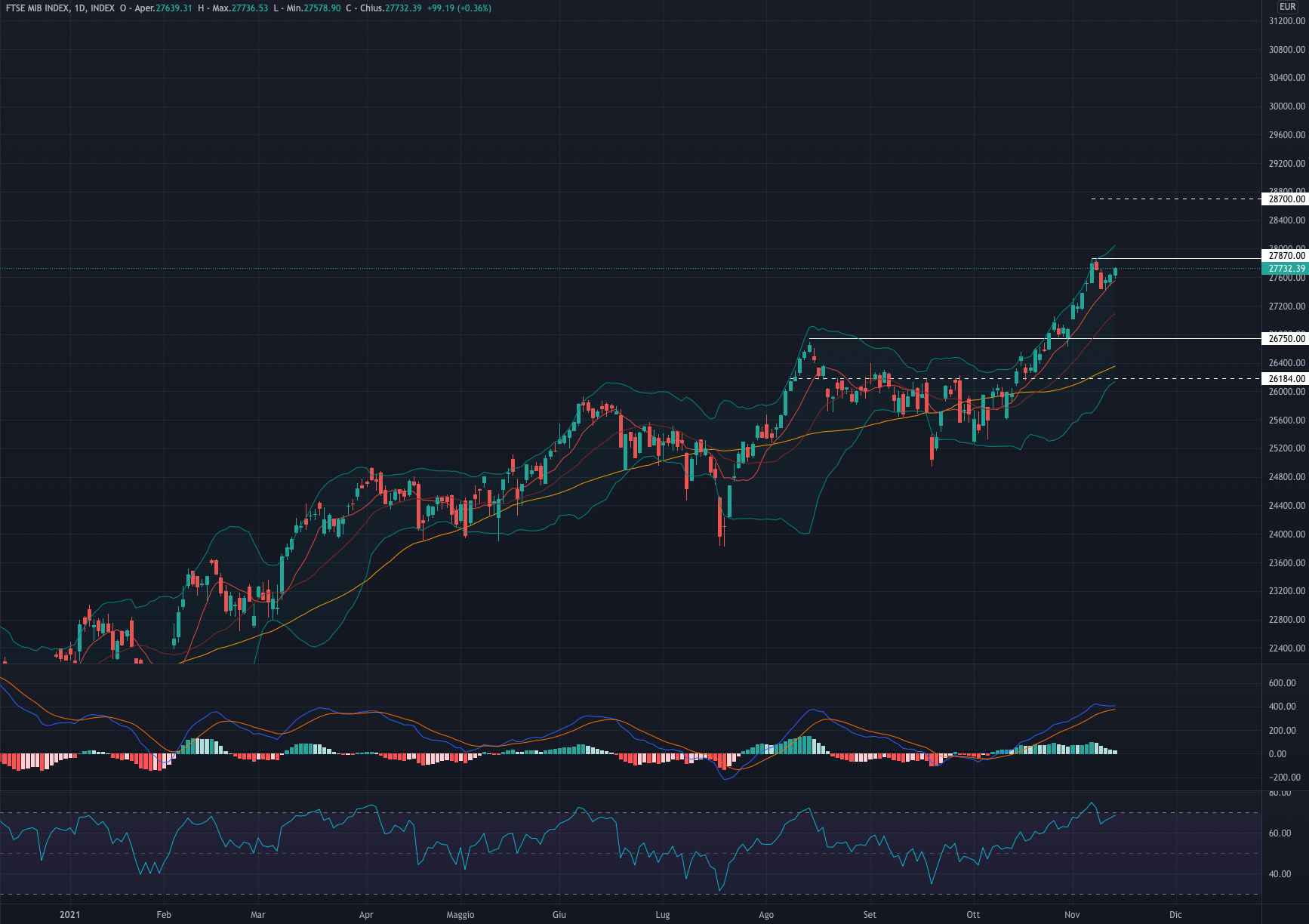 The German index continues to fluctuate in a close parallel channel, tested already a few times during the week.

The price fluctuation could suggest a break to the upside but in our opinion, it is more the MACD and RSI indicators that sound a precautionary alarm.

MACD, despite a bullish week, is continuing to signal a loss of momentum.

RSI has reached the overbought zone where we could expect a subsequent retracement in the short term. 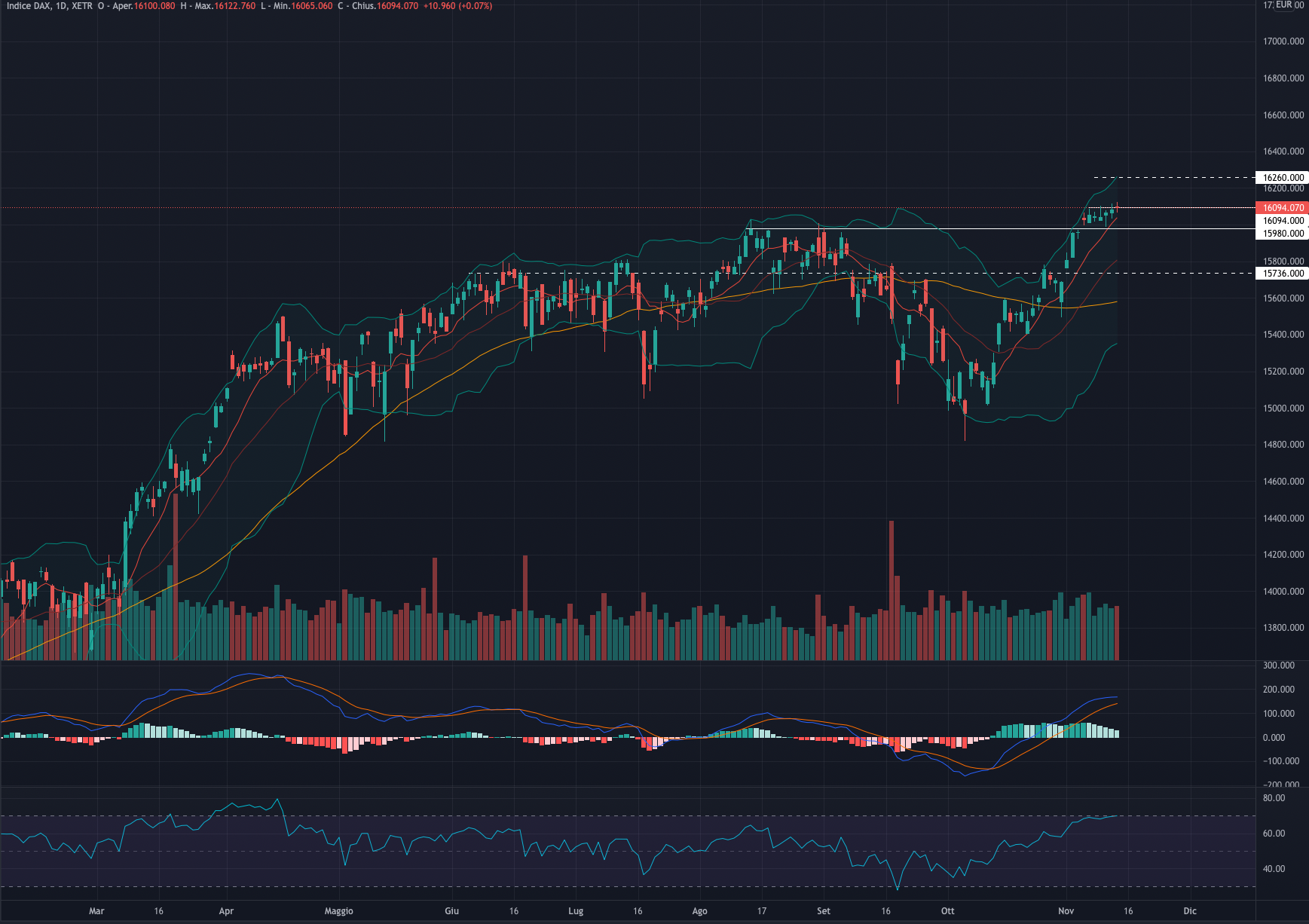 For the coming week, the index could retrace at least to 4,600.

The SPX this week has completed the retracement we had announced last week and we believe that this can continue into the following one.

Indeed, while we have seen a resurgence of strength in the price in recent days, the MACD and RSI indicators still remain in support of short-term bearish swings.

MACD is close to a bearish cross and the RSI still remains in the overbought zone.

The strong gap from the 50MA, combined with over-extended indicators, suggest a possible retracement in the short term keeping the strong primary uptrend intact. 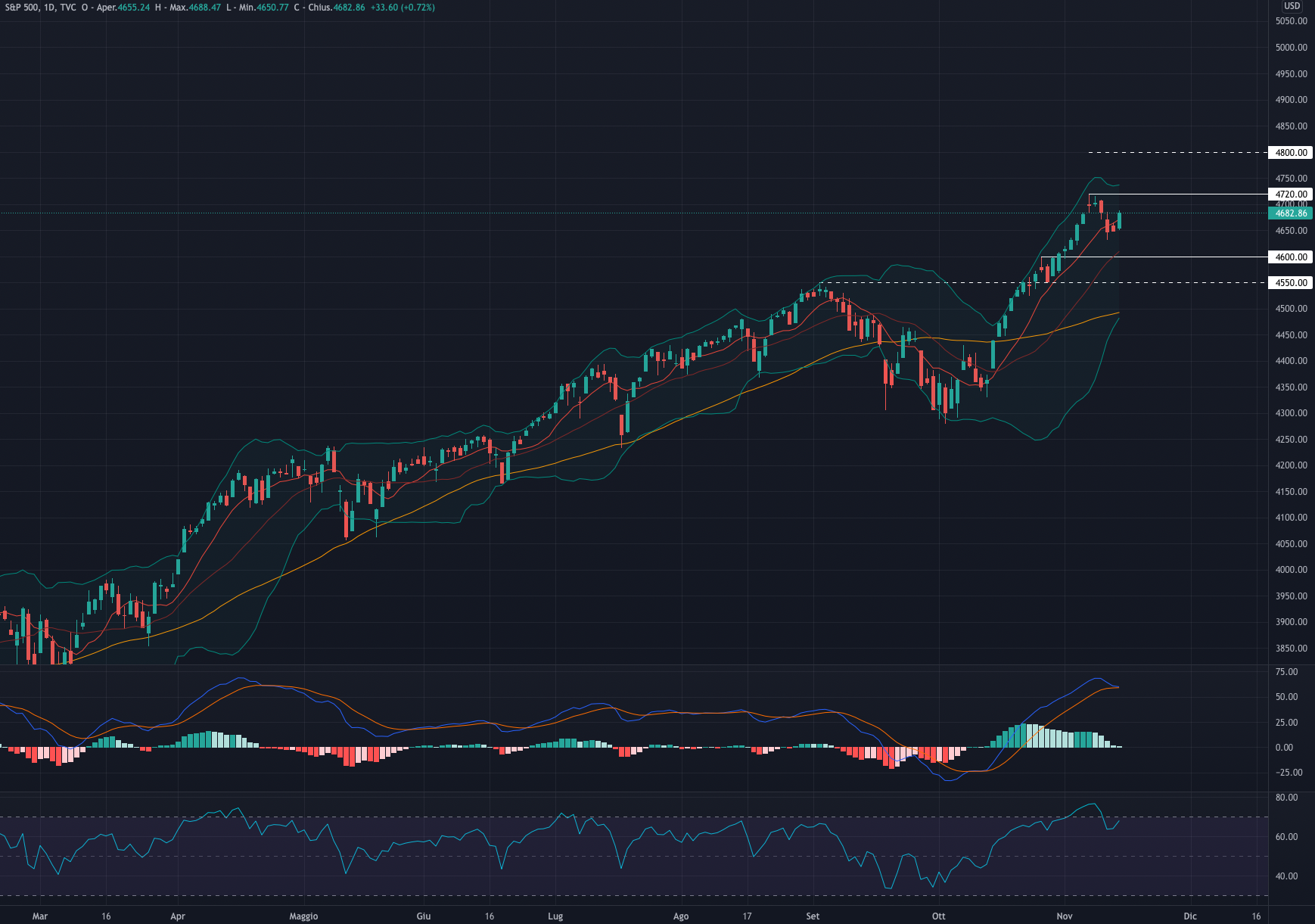 The tech index, after retracing to 16,000, has regained ground in the last days of the week. We read these latest increases as a possible backtest of previous intermediate support zones and then continue to the downside.

MACD appears to be close to a bearish crossover and RSI continues to be in overbought territory.

The primary trend remains strongly bullish, but the MACD and RSI indicators combined with a strong distance from the 50MA suggest a possible retracement before resuming higher. 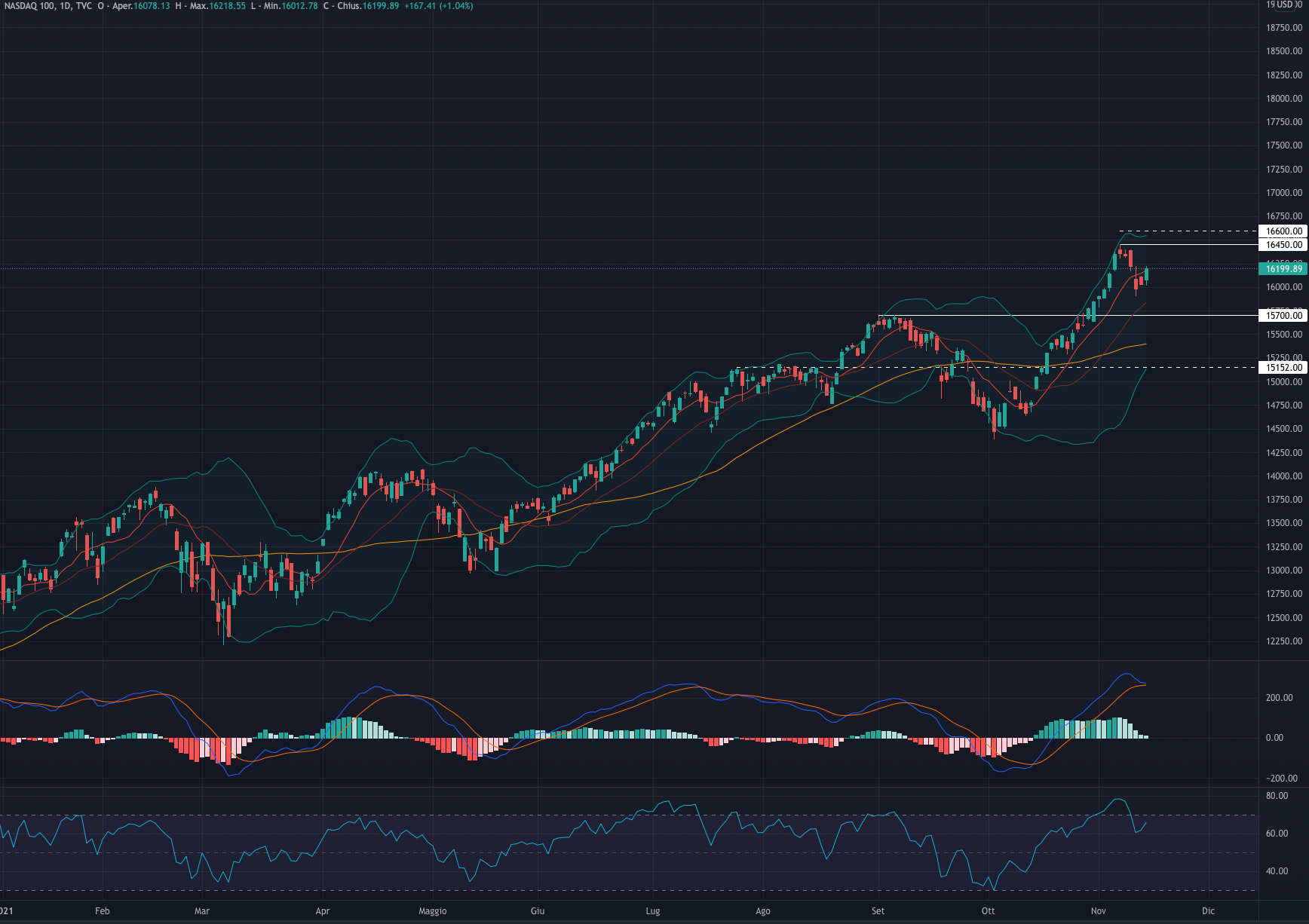 The Dow Jones is one of the American indices that has retraced the most in the week just ended.

We could expect a slight rise to at least 36,200 to then continue lower.

MACD has crossed to the downside and we expect it to continue for the week ahead.

RSI has left the oversold zone and could support a back-test of the previous level before keep going down.

The trend remains bullish but we expect bearish swings before entering December. 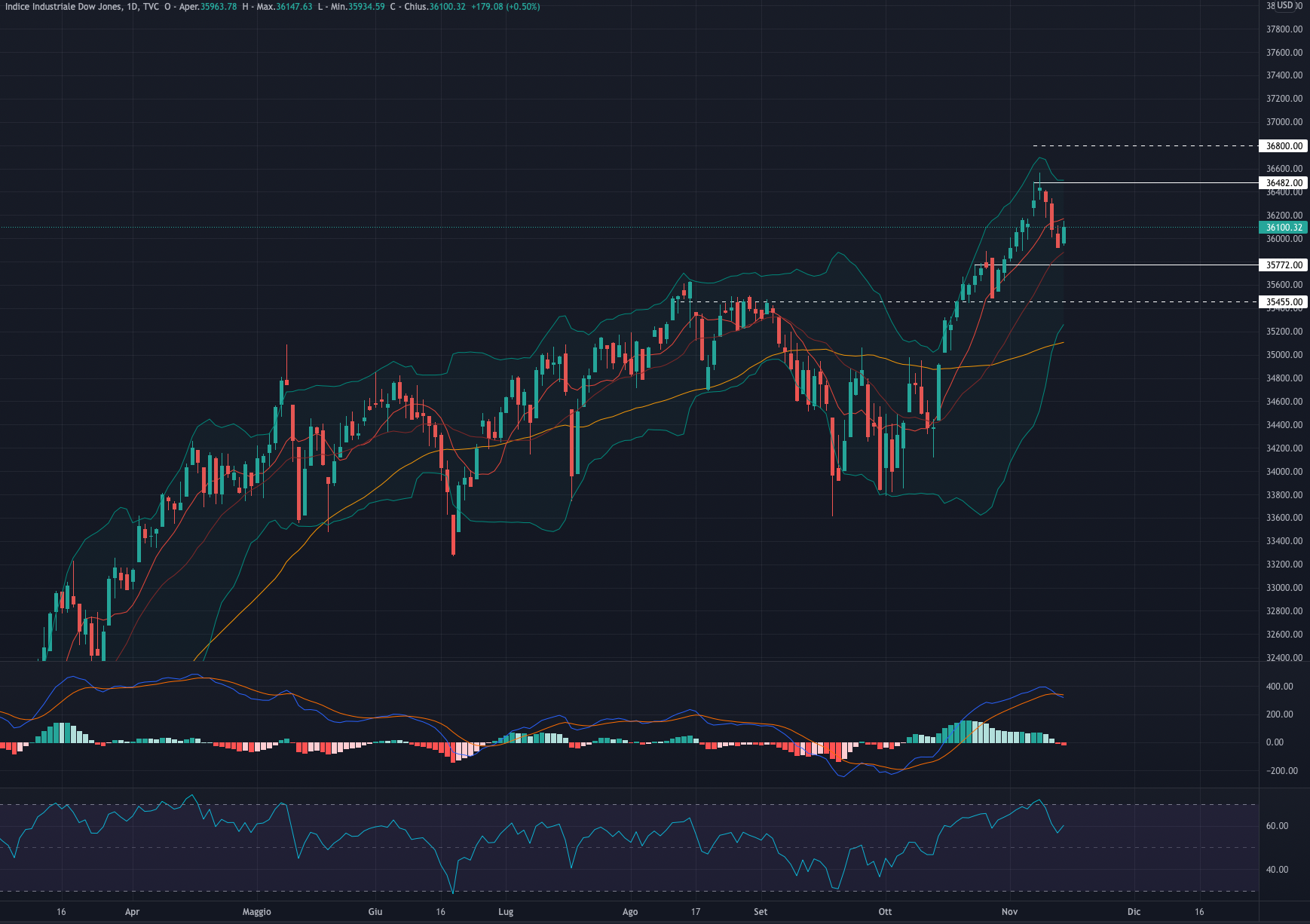