Markets are counting on the US to provide a stimulus jump into a full-fledged recovery. The signs of expectation and excess abound from equities to GameStop, silver, and cryptos.  Economic growth and hiring require more than a massive spending program. Can governments and central banks restore the confidence that must underlie a successful recovery? Join senior analysts Valeria Bednarik, Yohay Elam, and Joseph Trevisani for a look at the complications behind today's headlines.

Yohay Elam: We are having this conversation just after jobless claims have come out worse than expected. 793K in the week ending February 5.

Joseph Trevisani: For the moment, I'm not sure vaccine rates matter, US statistics are coming down fast..for the future yes..and also I think for some of the state governors, like NY to be willing to fully open.

Yohay Elam: And on February 5, the US Nonfarm Payrolls report for January disappointed with an increase of only 49,000 jobs.

Valeria Bednarik: Yeah, US data continues to disappoint. Soft employment figures stand out, as the recovery in the sector keeps slowing. That will be a drag for the economy, and in turn, to the Fed. Lower rates for longer everywhere!

Joseph Trevisani: Yes and the administration just axed 11,000 construction jobs by canceling the Keystone pipeline, so there might be a question as to the White House's commitment to creating jobs.

Joseph Trevisani: Which could certainly affect businesses' willingness to hire. And the push for a Federal $15 minimum wage will have the same impact by cutting entry-level positions and encouraging automation.

Valeria Bednarik: Yeah quite a mixed picture with stocks at records and economic growth retreating, but well, we saw this before. Not that QE and lower rates did that much good.

Yohay Elam: Economists have changed their minds about hiking the minimum wage, and most support it.

Joseph Trevisani: So there are, from a business point of view potential problems.

Yohay Elam: The Fed's bond-buying is the no. 1 driver of stocks.

Joseph Trevisani: At this point, the end of QE  is lost in the mists. If there is one lesson from zero rates, it's that they habituate. And they are very difficult to leave.

Joseph Trevisani: From a business point of view, and they are the ones making the hiring decision, they face an uncertain future with the current administration. So that alone could inhibit job creation, whatever happens with the stimulus.

Valeria Bednarik: Missing the economic plan? or do you think it's coming?

Joseph Trevisani: US vaccination rates are far ahead of Europe, except for the UK and Israel, so it appears there was a plan already.

Yohay Elam: One of the factors driving the pound higher is the UK´s vaccination plan.

Valeria Bednarik: I mean, I understand vaccination is considered a "first step" but what's next?. That's what businesses need to know to make plans.

Yohay Elam: Keeping businesses alive and workers attached to their jobs while vaccinating as soon as possible. That should be the plan everywhere.

Valeria Bednarik: It is, but guess what Joseph says is that the government has to do more than just following the pandemic flow to build confidence.

Joseph Trevisani: The problem is that stimulus is not an economic plan, it is just a spending plan. It will certainly help to keep remaining businesses open but the attitude of the administration toward business, regulation, legislation is equally important. Absolutely.

Valeria Bednarik: Yups, agreed with you. Not that the US is alone in doing this anyway. There's one more thing to this. We are getting bored. Financial markets are eagerly waiting for a fresh catalyst. Have to be honest, I can't see it in the near-term.

Yohay Elam: EUR/GBP is at the lowest since May, and that can be attributed to vaccines. The next move is stimulus then central banks.

Joseph Trevisani: I was hoping a US recovery would flower, faster than the rest of the world, as is historically the case, giving the dollar a run. But now, I became concerned. As for stimulus, it habituates, the law of diminishing returns...

Yohay Elam: The upbeat US vaccination campaign is set to give the US an edge.

Joseph Trevisani: More stimulus on top of all, now, does not really work. Japan and Europe are examples of the futility of depending on central bank rate "stimulus"...

Valeria Bednarik: You are speculating Yohay. We hope so, but still uncertain.

Yohay Elam: I don't think that new US regulation – which will likely be minimal at least at first – has any chance of outweighing stimulus and vaccinations. Europe is lagging behind the UK and US in fiscal stimulus.

Joseph Trevisani: At some point, the people and businesses that are actually doing the hiring have to be encouraged and support, and that is a worrisome point now.

Valeria Bednarik: But new regulations will fuel confidence, which we lack globally these days. It may not have a direct impact on the USD, but in the end, it will lean the scale in the US's favor. (I'm agreeing with Joseph! note this day down!).

Joseph Trevisani: I thought you always agreed with me... Ha! I'm going to have to go back over old conversations.

Valeria Bednarik: What puzzles me, is that central bankers keep telling us that the pain will continue, that there's a long way ahead of employment/inflation recovering, and still, "we" believe in an economic comeback in the second half of this year.

Joseph Trevisani: My other concern is that the virus never really vanishes, after all, the flu, its cousin doesn't, and that this will be used to maintain a level of restrictions that will slowly strangle business.

Valeria Bednarik: I think we are approaching a reality check, which at least will provide us with some action.

Joseph Trevisani: Well the Fed has been predicting a return of inflation for more than a decade...

Yohay Elam: Until the Fed gave up on inflation last year they want to see inflation above 2% for a year before they start believing it.

Joseph Trevisani: Their predictions are sometimes, like everyone else, just talking their book. The Fed wants inflation at 25, so it predicts exactly that.

Yohay Elam: Volcker is probably turning in his grave, but times have changed.

Joseph Trevisani: Exactly, and now I am agreeing with Yohay, so it is an unusual day.

Joseph Trevisani: The Age of Aquarius.

Valeria Bednarik: The year of the Ox.

Yohay Elam: Yeah, I guess we´re happy because of the Chinese New Year.

Valeria Bednarik: "This year is going to be lucky and also perfect to focus on relationships, whether we are talking about friendships or love." according to Google...

Valeria Bednarik: I'm a bit disappointed about gold's behavior, to be honest. Would have expected it to be trading higher at this time of the year. Instead, equities are the ones at record highs. Guess I'm more conservative than I think. 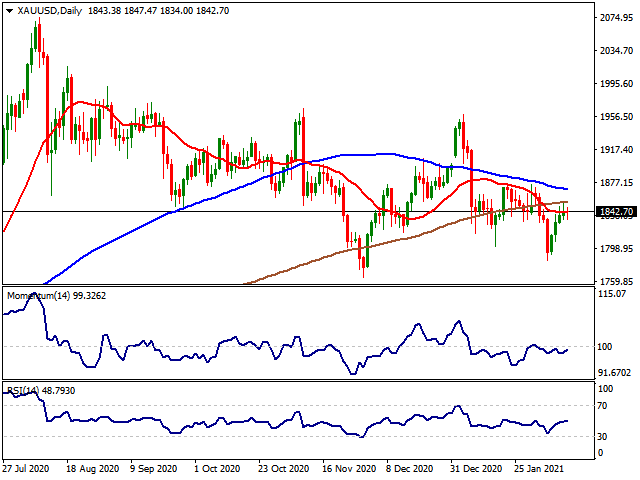 Joseph Trevisani: Perhaps the armageddonists have temporarily left gold, as the world does not seem headed for collapse at the moment.

Valeria Bednarik: And looking at the daily chart, chances are skewed to the downside. Lower highs since topping 2,050.

Yohay Elam: Although that didn´t work with silver.

Valeria Bednarik: Yups, that's what I was about to say: One day of fun, that gap, and then, one day more to return to pre-frenzy levels. Those things only work once. It did with GME for sure. 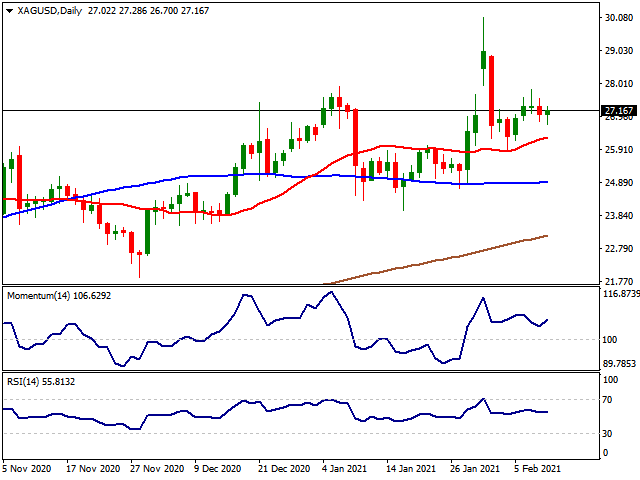 Yohay Elam: These Reddit moves are like the S&P mentality but in reverse. Sell the Rally instead of Buy the Dip.

Joseph Trevisani: The more things change the more they stay the same.

Yohay Elam: Or however it's written in French.

Yohay Elam: However, Tesla's entry to Bitcoin is somewhat different. First, it allows Tesla to make some money...

Valeria Bednarik: And what about "Lil X" entering Dogecoin?. Elon is bored also, having some fun with us all...

Joseph Trevisani: It gives bitcoin wider credence that is important.

Yohay Elam: Further bringing it to the mainstream.

Joseph Trevisani: I think so...

Yohay Elam: So far, Tesla's move is good for its balance sheet, they probably made more money on BTC than on car sales lately. But will they accept Bitcoin as a means of payment? That would be significant for cryptos.

Joseph Trevisani: Except for stocks markets are in a holding pattern...

Yohay Elam: But I'm not sure it is imminent.

Joseph Trevisani: We need to see economic gains before currencies and credit can implement a new scenario.

Valeria Bednarik: Well, not imminent, but for sure will open up to it, else it will be a panic-factor for financial markets.

Joseph Trevisani: Unfortunately I agree. I am not seeing the ramp to a fully recovering economy.

Valeria Bednarik: We like it or not, we are still depending on pandemic-related headlines, and how we progress towards getting rid of it.

Joseph Trevisani: The stimulus in the US will not do it, unless it is supported by the wider efforts of government and I am concerned about that specific point.

Valeria Bednarik: Agree with you. It may be a temporal boost, but that's not the only thing we need these days.

Yohay Elam: A small shot in the arm.

The greenback accelerated its slump with Powell conservative outlook, who said that substantial economic progress will take some time. GBP/USD trading at fresh three-year highs.

XAU/USD has chopped either side of the $1800 level in recent trade. Gold prices and broader financial markets await comments from Fed Chair Powell on recent bond market moves.