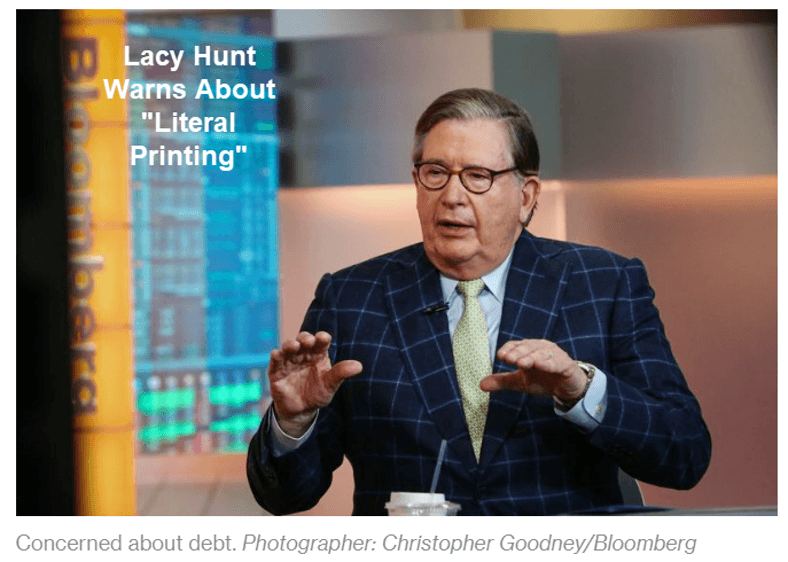 There is a risk of "Literal Printing", but QE is not that risk.

Earlier today I posed a Q&A what if on QE: What Would Happen to Inflation If the Fed Announced $40 Trillion a Month in QE?

My conclusion was not even a further quadrillion in M1 via QE would matter.

I just added a couple of paragraphs to the post that are themselves worthy of a monetary spotlight update.

LH: When the Fed initiated QE1, QE2 and QE3, folks said those policies were very inflationary. There is a liquidity effect of what the Fed is doing, and the liquidity effect can be very powerful over the short term. But ultimately the increase in the money supply did not follow through after the rounds of Fed purchases of government securities because the banks couldn’t utilize the reserves

LH: The great risk is that we become dissatisfied with the way things are, and either de jure or de facto, the Federal Reserve’s liabilities are made legal tender. The Federal Reserve as it’s constituted today can lend but it cannot spend. Now, they’ve done some things that are different from what the Federal Reserve Act said under the exigent circumstances clauses, but so far they’re lending.

LH: There are folks who want to make the Fed’s liabilities legal tender. Now, if that happens, then the inflation rate would take off. However, in very short order, everyone would be totally miserable because no one would want to hold money. You would trigger Gresham’s Law — people would only want to hold commodities they can consume and commodities that can be traded for others. 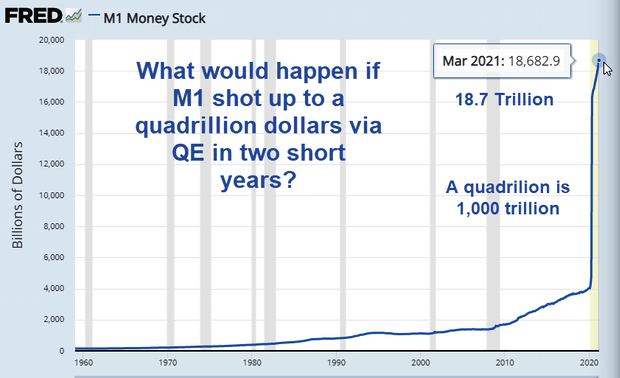 Please read the rest of the above interview because it's very pertinent to the discussion.

Note that the QE related M1 deposits are not legal tender. They cannot be spent or lent. Thus, they are not really money in the first place.

To make sense of the hockey stick M1, one needs to subtract the Fed's balance sheet.

There was no Fed-induced helicopter drop. There was lending and even some illegal speculation in junk bonds, but the real "helicopter drop" was Covid-19 stimulus first by Trump then by Biden.

In three rounds of stimulus, one under Trump and two under Biden, Congress did give away trillions of dollars that did get or will get spent as opposed to trillions in QE that didn't and won't.

The Fed's interest rate suppression did so as well, but the main effects were on asset speculation and housing.

Please review What Would Happen to Inflation If the Fed Announced $40 Trillion a Month in QE? to see how this all ties together.