GLD (SPDR Gold Shares NYSE) is the world's largest gold-centric Exchange Traded Fund (ETF). On Friday June 21, 2019 – one day after The Gold and Silver Volcano is Ready to Erupt was posted on this site – a record single day's inflow (gold buying) of over $1.5 billion took place.

The price of gold rose to a 6-year high, left a series of gaps on the way up, and smashed through all sorts of technical "resistance" points on traders' charts around the globe.

At the same time, silver – almost unnoticed because its rise was relatively muted – broke out on the strongest volume since 2011, printing its second highest Up Volume ever!

So what is going on? When a major market movement like we witnessed in late June takes place, everybody looks for an answer. And everyone has an opinion. 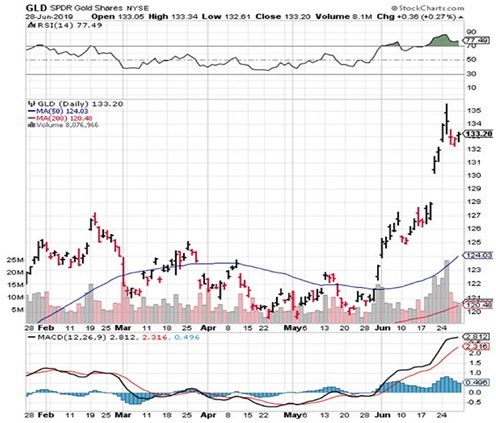 But the only opinion which really matters – that of the Market – usually takes a while to reveal itself. David Morgan with a track record in resource sector prognostication as good as any in the business, never fails to remind his readers who the real guru is: Mr. Market him/herself. David wrote,

I certainly have my opinions, based upon decades of trading, research, and experience. But no matter how strongly I feel about a given situation, I never hesitate to step back and see if price action supports what I think is taking place.

Whether you're an individual investor, a giant brokerage firm, even a sovereign wealth fund, or a central bank, it helps to keep in mind the fact that - sooner or later - the market always has the final say.

Gold is like a measuring rod, a ruler. It just measures value. It's not using gold coins to buy stuff at Walmart. It's like 12 inches in a foot or 60 minutes in an hour. And it's worked for 4,000 years when people have done it and done it right...

Gold keeps its intrinsic value better than anything else. When you see the nominal price change, that's not the value of gold changing, that's the value of the dollar or whatever currency you're talking about, changing in value. Gold is the constant, like the North Star.

On a number of occasions, Porter Stansberry has posted in the public domain for readers (of which I am one) via his Stansberry Digest, lengthy, no-holds-barred essays focusing on systemic risk – and the potential for ensuring against or profiting from it. 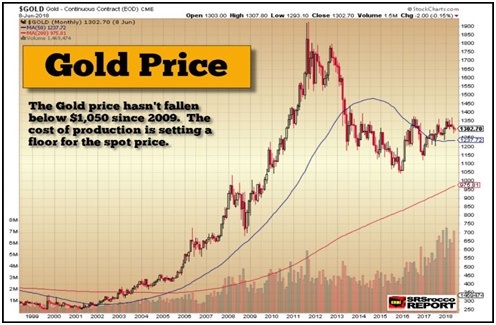 Recently, he wrote just such an essay. The title, "The Most Important Digest Porter Has Ever Written?" is not an exaggeration.

Part of his premise is that as "the expected real return (after inflation)" by 10-year bond holders drops below 2%, the system becomes unstable.

This harbinger of recession causes the Fed to respond by "printing" more money.

If Porter is even close to being correct (and I believe he is), reflecting upon the implications could help you remain "above the fray" as the house of cards our supposed financial wizards have put together around the globe – and at home – starts collapsing around our ears.

It's been 8 long years since gold, which was making annual highs for the prior decade, tipped over into what would become an almost uninterrupted decline, 2016 notwithstanding.

Many investors and "stackers" who had been at it through thick and thin for decades, couldn't take it anymore and called it quits. I have remarked at investment conferences that the years 2013 to early 2019 were more difficult for me psychologically (and financially) than the 22 year bear market following the 1980 metals' top.

As you read this, a fair number of people are actually selling back their physical gold and silver at "breakeven" prices, never to return. I hope you are not one of them.

Looking at Stewart Thomson's chart below, which he first posted over 8 months ago, ask yourself what you feel when you look at it.

Even as the right shoulder builds out for a strong up move, it's difficult not to keep looking in the rear-view mirror. But listen to someone who has time and again gone against his own emotions in building highly profitable long-term positions. Stewart remarks:

We are all cowards on price weakness. Those who admit it, those who bet against it make money. Those who hide it and lie about it, lose money. End of story.

There are no guarantees in this world. Of course, he could be wrong. But what if he's right? 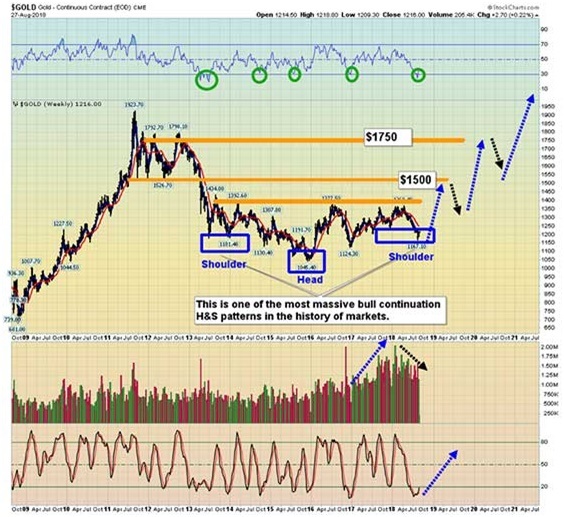 The wisdom of holding physical gold and silver as insurance – stored securely and discretely – has proven itself time and again in every historic timeframe.

Yes, the gold price may yet decline for awhile, even down to 1250, as it "backs and fills"- preparatory to a highly probable resumption of the uptrend. Or the decline might be quite shallow. There's just no way to know for sure. As with so much else in life, it's a lot about probabilities.

But don't wait for Mr. Market to spell out reasons for the sea-change we're seeing right now in the price of gold – and eventually silver.

Make absolutely certain that you have at least an amount that fits your personal needs and expectations. As this epic tale continues to unfold, you'll be glad you did.