While Flash US PMI declined further in January, the input inflation accelerated. It’s not clear whether the Fed should become more dovish or hawkish – and that impacts gold.

The flash US PMI Composite Output Index registered 46.6 in January, up from 45.0 in December. It implies that the decline in business activity softened to the slowest in three months. But it was a further fall, as each number below 50 means a decrease in the economic output. The main drivers of the downturn were the impact of interest rates hikes, uncertainty, and high inflation on consumer spending.

The US Services Business Activity Index posted 46.6 in January, up from 44.7 at the end of 2022. The service sector thus experienced another solid decline, although the softest since last October. The S&amp;P Global Flash US Manufacturing PMI was also up slightly from 46.2 in December to 46.8 in January, but it was still the second-fastest decline since May 2020.

The good news is that the numbers beat expectations. The bad news is that input inflation struck back. It quickened from December, ending a seven-month sequence of moderating cost pressure.

U.S. Flash PMI and the Fed

Although the January data came above expectations, it showed that private sector contractions continued into the new year. As Chris Williamson, Chief Business Economist at S&amp;P Global Market Intelligence, commented:

The US economy has started 2023 on a disappointingly soft note, with business activity contracting sharply again in January. Although moderating compared to December, the rate of decline is among the steepest seen since the global financial crisis, reflecting falling activity across both manufacturing and services.

But what is tricky in the report is the stagflationary flavor, i.e., the indication of both a weakening economy and rising inflationary pressure. As Williamson said,

The worry is that, not only has the survey indicated a downturn in economic activity at the start of the year, but the rate of input cost inflation has accelerated into the new year, linked in part to upward wage pressures, which could encourage a further aggressive tightening of Fed policy despite rising recession risks.

Indeed! Although the 25-basis points hike in February seems to be already determined, the Fed could provide more hikes than currently expected. I wouldn’t be surprised if the dovish actions at the upcoming FOMC meeting were accompanied by hawkish signals. Given that the small (well, before 2022, it was a standard size of an interest rate hike) move is already priced in, any hawkish clues would be detrimental to gold prices.

What does it all mean for the gold (and silver) outlook for 2023? Well, as the chart below shows (courtesy of goldpriceforecast.com), the price of gold has been rising recently. The upward move has been driven by hopes of a more dovish monetary policy and, eventually, the Fed’s pivot. Hence, any hawkish surprise could send gold prices down. 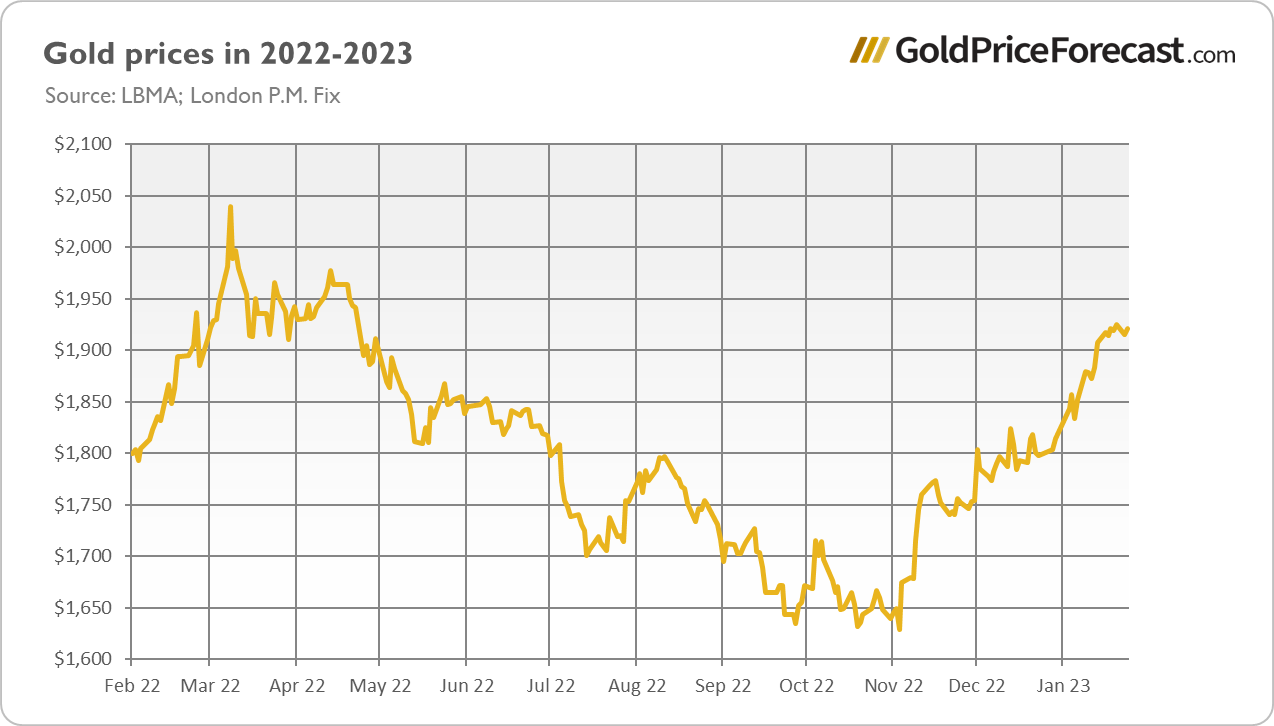 However, it’s too early to declare the comeback of inflation. It was just one month of acceleration in input costs, and they didn’t translate into higher output prices. Hence, I believe that the dovish outlook is more likely, especially since the most prominent hawks don’t vote in 2023 (because of the rotation within the FOMC members, Bullard, Mester, and George are out this year).

To be clear, in a stagflationary environment, monetary policy will fluctuate from dovish to hawkish, and gold prices will react accordingly. However, the weakening economy should prompt the Fed to adopt a more dovish stance in the upcoming months, which should be a tailwind for gold.

The GBP/USD pair has refreshed its day’s high at 1.2405 in the early European session. The Cable has picked up strength as the US Dollar Index (DXY) has turned extremely volatile amid chatters over the interest rate decision by the Federal Reserve (Fed) and the Bank of England (BoE) this week.