It was a sea of red in global equities as investors waited for the latest US inflation numbers scheduled for tomorrow. In Europe & the UK, the DAX, FTSE 100, and Euro Stoxx 50 retreated by more than 2%. Similarly, in the United States, futures tied to the Dow Jones, S&P 500, and Nasdaq 100 index declined by more than 1%. Technology stocks are leading the sell-off; shares of companies like Microsoft and Apple have fallen sharply. This is mostly because of their pricey valuations. Analysts expect the data to show that consumer prices surged by more than 3% year-on-year tomorrow, higher than the Fed target of 2%. In a note to Wall Street Journal, Peter Langas of Bessemer Trust said:

“Inflation is an issue that is on everyone’s minds right now, and it is injecting a lot of uncertainty. The question is, how does the Fed react to that?”

The price of cryptocurrencies attempted to recover some of the losses made in the overnight session. The price of Bitcoin rose from the overnight low of below $54,000 to more than $56,000. Similarly, Ethereum rose back above $4,000 while Binance Coin rose above $660.

Like stocks, there are concerns about inflation. If inflation comes out higher than estimates, it could raise speculation that the Fed will shift its policies. Higher rates, on the other hand, will lead to a relatively stronger US dollar and push crypto prices lower. The biggest surprise was a cryptocurrency known as Shiba Inu, which has come from obscurity to become the 16th-largest currency in the world valued at more than $21 billion, according to CoinMarketCap.

The euro rose slightly against the US dollar after some encouraging data from Germany. According to the ZEW Institute, the country’s economic sentiment rose from 70.7 in April to 84.4 in May. This increase was better than the median estimate of 72.0. Similarly, the current conditions increased from -48.8 to -40.1, better than the expected -41.3. These numbers show that the sentiment among businesses is improving as demand for their products rises. Similarly, there is optimism about the current pace of the vaccination process. Still, recent numbers show that the German economy will likely have a slower recovery than in other places like the US, China, and the UK.

The EUR/USD pair rose to an intraday high of 1.2170, which was slightly below yesterday’s high of 1.2178. On the hourly chart, the pair is above the 25-day moving average. It is also above the dots of the Parabolic SAR. Further, the price is slightly above the ascending pink trendline. The MACD is hovering near the neutral line while the Relative Strength Index (RSI) has moved to 60. Therefore, the pair may continue rising, with the next target being at 1.2178. Any moves above this resistance will see the price rising to 1.2200. 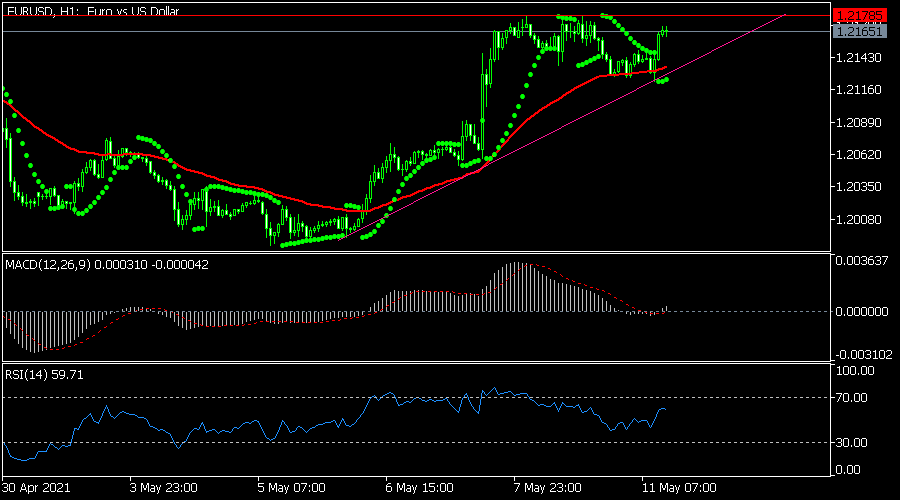 The GBP/USD is hovering near its highest level since February after the recent Scottish Parliament election and strong data from the UK. Earlier today, data by the British Retail Consortium (BRC) said that retail sales rose by 39.6% in April. The pair is trading at 1.4135, which is above the short and longer term moving averages. It is also slightly below the year-to-date high of 1.4240. Therefore, the pair may continue rising in the near term. Nonetheless, a drop below 1.4050 will invalidate the bullish trend. 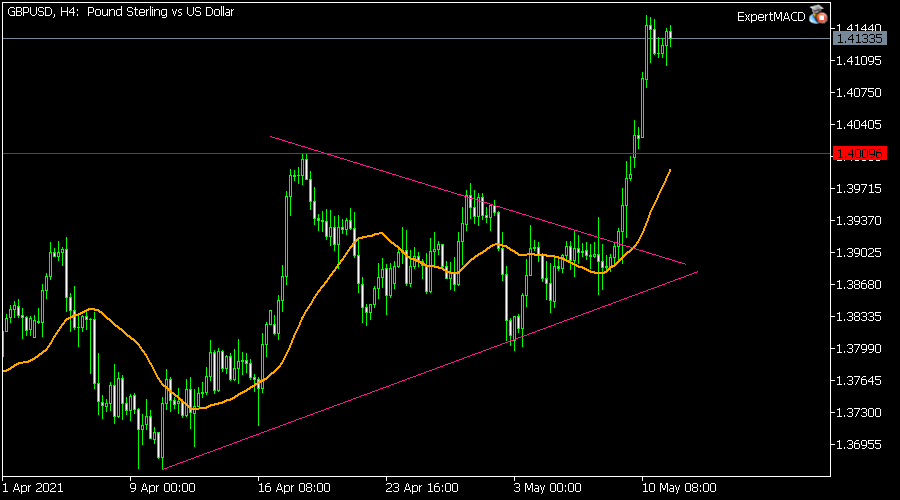 The XAU/USD pair rose to a three-month high of 1,840 as the market focuses on the upcoming US inflation numbers. On the four-hour chart, the price is above the 25-day and 15-day moving averages while the Relative Strength Index (RSI) is hovering near the overbought zone of 70. The pair also seems to be forming a bullish flag pattern. Therefore, the upward trend will continue so long as the price is above the 2 moving averages. 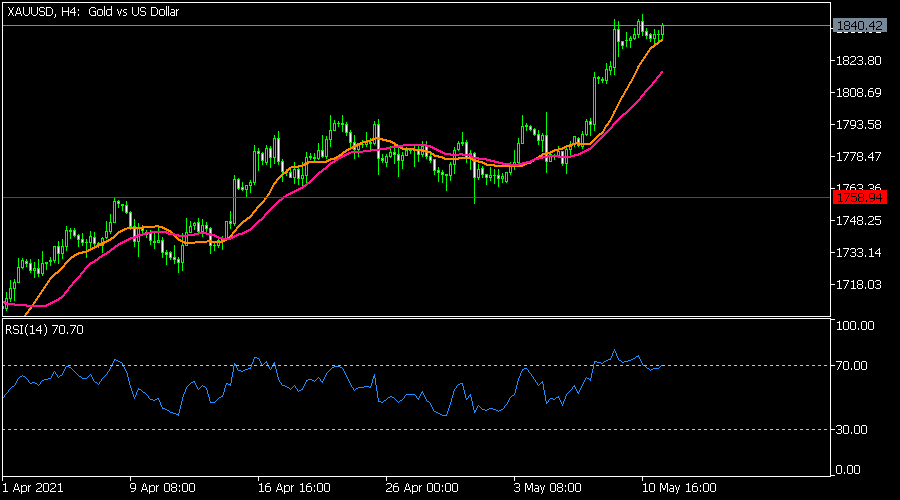 Gold lacked any firm directional bias and remained confined in a narrow trading band through the first half of the European session on Wednesday. Investors now seemed reluctant to place any aggressive bets, rather preferred to wait on the sidelines ahead of the highly-anticipated FOMC monetary policy decision.