Since a typical mid-market low of 1.838 against the New Zealand Dollar at the end of July, the Pound has seen gains on hopes that a Brexit deal can be reached. In fact, GBP has broken the 1.95 mark in September 2019. This is a considerable gain for the beleaguered Pound. The jump has been sparked by speculation that the UK government is softening its stance on the Northern Irish backstop to try to reach an agreement with the European Union before the fast-approaching 31 October deadline. It is reported that Prime Minister Boris Johnson is seeking a new deal where Northern Ireland would incorporate more EU rules after Britain leaves.

Q. Why has GBP gained against NZD lately?

A. Since a typical mid-market low of 1.838 against the New Zealand Dollar at the end of July, the Pound has seen gains on hopes that a Brexit deal can be reached. In fact, GBP has broken the 1.95 mark in September 2019. This is a considerable gain for the beleaguered Pound. The jump has been sparked by speculation that the UK government is softening its stance on the Northern Irish backstop to try to reach an agreement with the European Union before the fast-approaching 31 October deadline. It is reported that Prime Minister Boris Johnson is seeking a new deal where Northern Ireland would incorporate more EU rules after Britain leaves.

This would include European regulations for agri-food. Although the Democratic Unionist Party – which has a pact with the Conservative Party - has not agreed to drop its objections to regulatory checks in the Irish Sea, it may accept some changes, as long as it does not affect trade or weaken the union. Although MPs are not sitting until 14 October, as Parliament has been prorogued – temporarily suspended without being dissolved – there is much political activity behind the scenes both from Brexit supporters and remainers.

Optimism over the Pound did not even drag it down against NZD following the publication of the Yellowhammer report, which warned of food and medicine shortages, higher prices and transport disruption in the event of a no-deal Brexit. The Pound’s performance going forward will greatly depend on whether agreement can be reached before Britain is due to leave the European Union on 31 October. With signs that the US-China trade talks are making progress, the outlook for the New Zealand Dollar also looks more positive. However, that has to be balanced against disappointing news from manufacturers.

Q. What is the latest business news out of New Zealand?

A. Although the influential Performance of Manufacturing Index (PMI) from Business New Zealand rose 0.3 points in August 2019, it remained under the vital 50 level, which signifies a rise in activity in the sector. The PMI was at 48.4, the second time in a row that a contraction was signalled. The last time that happened was seven years ago. The July fall was due to the effect of the surprise 50 basis points cut to interest rates by the Reserve Bank of New Zealand (RBNZ). The survey asks respondents to rate conditions for new orders, production, hiring intentions, prices and inventories.

BusinessNZ's executive director for manufacturing Catherine Beard says new orders hit a decade low. The employment outlook is also of concern. "The sub-index of new orders (45.6) dived further into decline during August, and at its lowest point in over ten years (May 2009). Given production (49.7) fell from expansion in July to decline in August, further declines in new orders will typically lead to worsening of production levels in the months ahead. While employment (49.3) showed some recovery from July, it has remained in contraction for four consecutive months.  Deliveries of raw materials (48.0) also remained in a tight band of contraction between 48-0-48.9 for three consecutive months.”

Some businesses said there has been a weakening in orders due to an overall economic downturn. There is now concern that the Q2 Gross Domestic Product (GDP) figures will be dragged down by manufacturing and that the sector will also struggle to make a positive contribution to growth in Quarter 3. Any fall in economic growth will put more pressure on the Reserve Bank of New Zealand to bring interest rates down even more from their current record low of 1%. That is likely to put more pressure on NZD against Sterling and other major pairs. The next money policy meeting of the RBNZ is on Wednesday 25 September. NZD did regain some ground against the Pound, when annual food inflation hit 2.1% in the year to August 2019, buoyed by a 10% rise in the price of lamb and 8% in pork and beef.

Q. How much progress has there been in the US-China trade talks?

A. With news that China is leaving agricultural products, including the vital soybean and pork sectors, out of its latest round of tariff hikes against the United States, there was optimism that attitudes were finally softening. At the same time, Chinese private businesses have imported more than 600,000 tonnes of soybeans from the US, the largest order in over a year. On the US side, President Trump said he would delay imposing extra $250 billion of tariffs, due to be introduced on 1 October, for two weeks and would consider an interim deal. The moves come ahead of the next round of talks due in October. Any softening in the trade dispute between the two countries is likely to benefit the kiwi. China is the biggest trading partner of New Zealand. In July 2019, exports to China rose 2.4%, while imports dropped 1.8%. But some business leaders are wary of being too bullish, saying that trade is the “biggest external risk factor” in the states.

Q. What about the UK economy? How is that faring?

A. Good news and not so good news.

With Brexit uncertainly weighing on UK trade, there were concerns that the UK economy could be heading for recession for the first time in 10 years. In Quarter 2, there was a 0.2% fall in output. January-March 2019 saw a rise of 0.5%. There was also a welcome boost in July 2019 of 0.3% in GDP, three time higher than expectations. The result was supported by a 0.5% rise in construction and 0.3% in manufacturing.

The performance saw the Pound rise from 1.90 to 1.92 against the New Zealand Dollar in typical mid-market rates. It is hoped that the stronger-than-expected result will be sustained over the next two months and see Britain avoid a technical recession of three quarterly declines in GDP in a row.

A. The New Zealand Dollar could have more trouble ahead…

The rate was trading around 1.9533 at the start of the new week after closing the previous week 2% higher on Friday. This breakout is likely to extend higher to an initial upside target at 1.9660, followed by 1.9800. A break above the 1.9620 highs would confirm a further move to the upside. A further break above 1.9800 (within 7 days) would likely green light the final push up to 2.0000 up to a months’ time.

Sterling remains at the whim of Brexit, with focus falling on continued UK-EU talks, as well as the Supreme Court hearing on UK Prime Minister Johnson's suspension of Parliament. If overturn would be another blow for the new prime minster, following a series of key votes lost in Parliament before the suspension.

Weak global conditions and the ongoing US-China trade war have taken a toll on the New Zealand economy, which is heavily dependent on trade and exports.  The NZD came under pressure on Tuesday, 17th September, following hints from the Australian Central bank they are likely preparing more monetary easing polices in the coming months, with the RBNZ likely to follow suit.

Key events to watch on Wednesday evening will be the US Federal Reserve meeting along with Q2 Gross Domestic Product (GDP) results for New Zealand. After two stronger than forecast quarters add 0.6% to the country’s GDP, the markets are braced for slower growth in Q2, with a forecast of 0.4%. If actual growth does not exceed the estimate, investors may react negatively and the NZ Dollar could lose ground.

The United States Federal Reserve holds its monthly policy meeting later in the day, and there is uncertainty as to whether the Fed will press the rate trigger at today’s meeting, or wait a month or two. There are forecasts of a 56% chance of a 1/4 point rate cut. If the Fed does press the rate trigger, we could see some losses for the US Dollar reaction tends to benefit the commodity counterparts, such as the NZD.

Q. How should New Zealand Dollar buyers and sellers react? 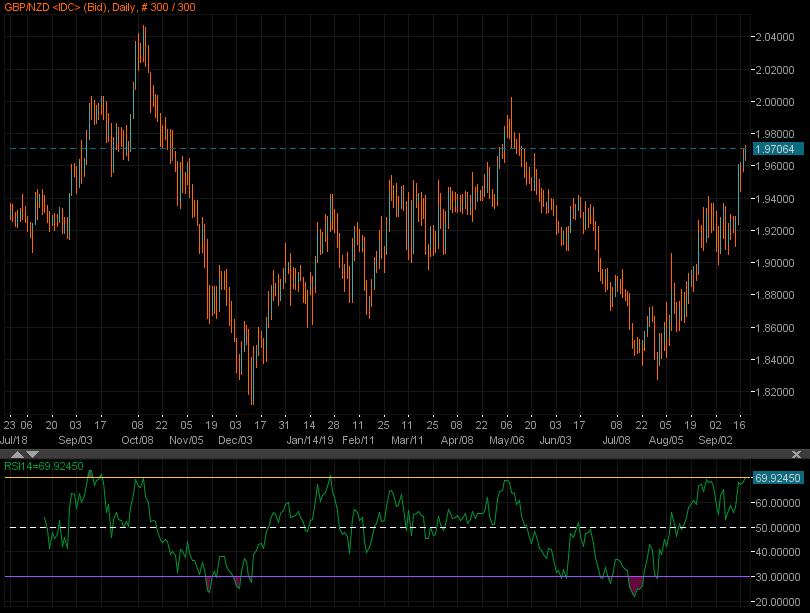