American stocks retreated in the futures market after the latest results by companies like Caterpillar and Apple. In its report on Thursday, Apple said that its revenue in the fourth quarter surged to a record high of $123.9 billion while its net income jumped to over $34.6 billion. The company said that the chip shortage cost the company about $6 billion in revenue. The management expects to report a solid quarter in Q1.

Meanwhile, Caterpillar said that its total revenue in the quarter jumped to $13.80 billion in a sign that the world economy is doing well. Chevron announced that it made a $5 billion profit as oil prices jumped. Other companies that published strong results this week are Tesla and Microsoft.

The euro extended its downward trend on Friday after the relatively weak economic growth data from Germany. According to the statistics office, the country’s economy declined by 0.7% in the fourth quarter as the Omicron variant continued. This decline led to a year-on-year increase of 1.4%, which was lower than the previous 2.9%.

The German economic performance was significantly weaker than how the US performed. The American economy expanded by more than 5% in the fourth quarter. Another report published today showed that EU manufacturers reported shortages of material and equipment, which will hamper the recovery. Meanwhile, in Spain, data showed that the economy expanded at the fastest pace since 2000 while France had the fastest growth in 52 years.

Cryptocurrency prices struggled today as investors continued worrying about high-interest rates. Bitcoin is trading at $36,436 while Ethereum is trading at $2,390. In total, the market cap of all cryptocurrencies has crashed to about $1.7 trillion. Investors are concerned that the rising interest rates will push investors away from high-risk assets to those that have value like dividend stocks. There are also concerns about regulations.

The EURUSD pair continued its downward trend today. It fell to a low of 1.1137, which was the lowest level since June 2020. The pair also moved below the 25-day and 50-day moving averages and is along the lower line of the Bollinger Bands. The Relative Strength Index is also pointing lower. The pair also managed to move below the important support at 1.1187, which was the lower side of the bearish flag pattern. Therefore, the pair will likely continue falling as bears target the support at 1.1050. 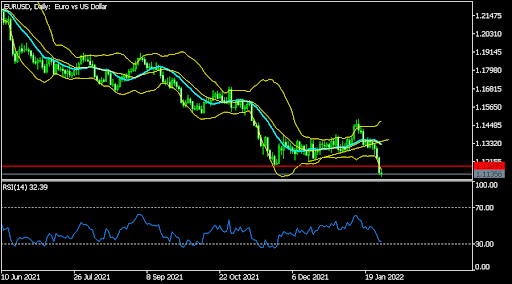 The GBPUSD pair tilted lower because of the overall strong US dollar. The pair is trading at 1.3382, which is slightly above the lowest level in December 2021. It has moved below the 61.8% Fibonacci retracement level. It has also declined below 20-day and 50-day moving averages while the MACD is continuing its bearish trend. Therefore, the pair will likely have a bearish trend with the next key support at 1.3345. 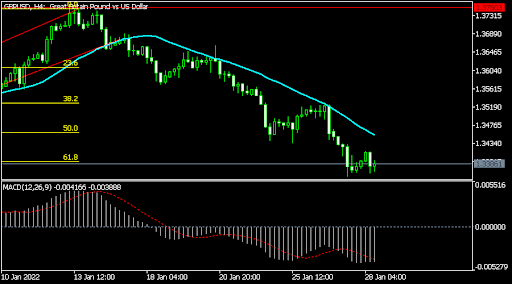 The USDCAD pair has been in a strong bullish trend in the past few days. The pair is trading at 1.2785, which was the highest level since January 10. It also moved above the 25-day moving average while the Relative Strength Index has moved to the overbought level. Therefore, the pair will likely keep rising as bulls target the key target at 1.2870. 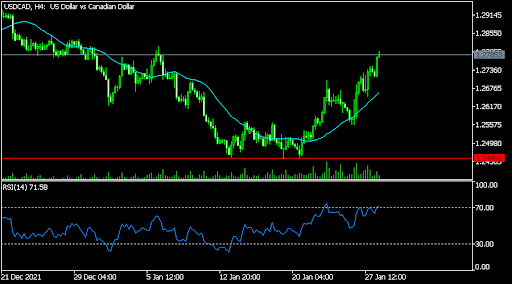