Historically, gold and silver tend to be highly correlated assets, but their strong positive relationship slightly relaxed in the first quarter of the year, making investors wonder whether this deviation could be something more than temporary in the coming years. This special report explains that although gold will remain a popular shelter for safe-haven flows, silver could be a shining opportunity during the post-pandemic period.

Metals have been a store of value for hundreds of years now, especially when inflation pressures eroded the purchasing power of money. Among them, gold is the most popular because it is rare enough to be admired but also available enough for supply, while its physical properties make it more durable compared to other metals. Hence, the unexpected pandemic shock, which unleashed fears of economic recession in 2020 and forced investors to pull their funds out of riskier assets and allocate them into safer investments, has boosted the gold price to a record high of $2,079 last August.

Likewise, silver, which is an alternative to gold, but is much cheaper because its supply is more abundant than gold’s, has setup an outstanding rally to an eight-year high of $29.83 in the same month. 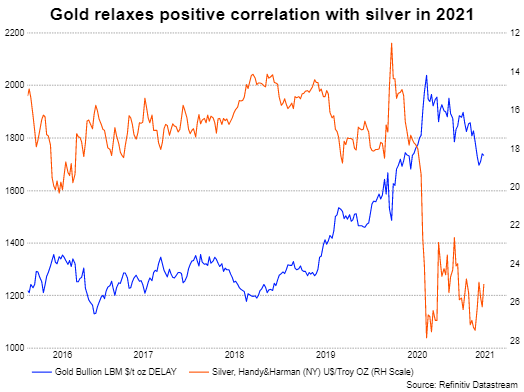 The period following the 2020 tops saw both precious metals stabilizing, though the market's treatment of silver was a little different this time, somewhat violating the multi-year long strong positive correlation with gold. Particularly, the yellow metal went downhill within a bearish channel, whereas the white metal became more volatile within a sideways range, getting a bullish tilt as the higher lows that were created above the March bottom remain well intact. Notably, the latter managed to unlock a fresh eight-year high of $30.03 at the start of the new year thanks to the demand boost from Reddit’s WallStreetbets group, unlike its yellow counterpart which saw its bullish efforts fading at the channel’s top line in the same period.

Whether this deviation is an accidental disruption or something more than temporary remains to be seen.

Silver is still technically positive despite the latest sell-off

From a technical perspective and given the above, silver's chart continues to point to further progress as long as it keeps a foothold above the $22.50 – $21.87 support area. Probably, a decisive close above $28.30 could set the stage for another bull run towards the $30.00 level. Beyond that ceiling, resistance could be next found within the $31.80 – $32.40 region last seen in 2013, while a step higher could trigger a sharper upside move towards the crucial $34.60 handle.

On the other hand, gold seems to trade on the wrong side of the market, facing stronger downside risks following the creation of a bearish cross between the 20- and 50-weekly simple moving averages (SMAs). With the price currently erasing the gains from March, another test at the bottom of the channel could be possible in the coming weeks, especially if sellers breach the $1,700 level. Alternatively, gold should violate the channel’s surface and create a higher high above $1,950 in order to achieve a broader outlook improvement, though such a task seems to be beyond the scope of the present activity.

The fundamental background may not disappoint silver bulls either. Although gold is recognized as a monetary asset, silver could attract attention for several reasons in the future too.

Foremost, demand for silver could spike thanks to its multiple usages in solar panels, mobile phones, automotive electrical systems, and 5G cellular networks as the global economy shifts funds towards green investments. Particularly, Biden’s $1.9 trillion stimulus package, which was approved early in March, and Democrats’ plans for larger infrastructure-dedicated funding of around $3 trillion are promising for smart and sustainable project developments, brightening the outlook for silver at least for the next decade. Besides this, China’s industrial evolution could be a blessing too if the pandemic evaporates for good since the biggest economy of the world is also a key player in the silver market unless the US extends its trade protectionism against Chinese factories.

As regards supply, the 2021 USGS resort revealed last month that silver reserves and production have declined in several countries from 2019 onwards, but the impact on price was minimal as producers sought to extract the metal from copper, lead, and zinc mines. Those mines are large projects, and the process of extraction may not be fast, keeping the outlook for silver prices positive for now.

Theoretically, gold and its closely correlated rivals such as silver tend to gain when investors fear that inflation can diminish the dollar’s purchasing power. Surprisingly though, the precious metals followed the opposite direction when the vaccine rollouts and the massive stimulus released by governments and central banks sparked the inflation fear factor. But there is an explanation for that. First gold and other metals do not pay dividends or any other revenue to their holders, unlike bonds, which saw their yields soaring at a quick pace because of the reflation trade. Therefore, the opportunity cost of holding those metals increased, making bonds, which have never defaulted in anyone’s lifetime, more attractive to own. Secondly, the increasing confidence in the US economy and the mounting expectations that the Fed could hike interest rates earlier than other central banks boosted the US dollar, making gold more expensive to buy in foreign currencies. That said, with the Fed pledging to keep interest rates close to zero, traders may not exclude safe-haven metals from their portfolio in the next few years, especially if the pandemic uncertainty keeps lingering in the background.

Gold – Silver ratio has yet to reach a bottom

Now as to which of those metals will gather the most interest in the coming years, the gold-silver ratio is usually a simple way to get some answer. A bullish trend reversal in the silver price has been following the peaks at the ratio, at least over the past two global recessions. Of course, the measure is currently well below its record high of 128.31 reached last March, though its downside could see further extension if it breaks below the 65.00 – 60.00 key support region, providing more support to the silver price. Note that the 50- and 200-weekly SMAs have successfully completed a death cross, while the fast Stochastics are heading towards the 80 overbought mark, increasing the odds for another downside correction in the ratio.