The risk negative bias that has ushered flow back towards safe haven assets in recent sessions is still present as we come towards the end of another frustrating week for major markets. There is a distinct lack of trend or conviction right now through forex and commodities. It is difficult for traders to take a view amid the frustrating lack of progress in US fiscal support negotiations and deadlock over a UK/EU trade deal. In Washington, the sense is that fiscal support is becoming (if it is not already) a political football kicked around as who can use it for their advantage moving into the Presidential election. Agreement is ever more unlikely and this is weighing on broad market sentiment. The EU/UK negotiations are also extremely knife edge, with game theory playing out in a classic sense. They are close enough to continue talking, but the lack of real traction makes it likely that this will drag on for some weeks yet. So with the impact on major markets, we see a drift towards safety, with the dollar and yen benefitting at the expense of higher risk commodity currencies such as Aussie and Kiwi. In the US a rebound in Treasury yields helped equities rally into the close, but this traction looks to be waning again today. As yields tick back lower again, it is setting up for another frustrating day for the bulls.

Wall Street closed marginally lower last night and well off session lows, with the S&P 500 -0.2% at 3483, whilst futures are flat today. Asian markets were marginally lower with the Nikkei -0.4% and Shanghai Composite -0.1%. In Europe there is a sense of catch up on the late session rebound in the US, with FTSE futures +0.6% and DAX futures +0.3%, but can this last? In forex, there is a risk negative bias helping USD and JPY to perform well. AUD remains under pressure after yesterday’s dovish comments from the RBA Governor Lowe. In commodities, the dollar gains are weighing again on gold (-0.2%) and silver (-0.7%). Oil continues to jag around, falling back -1% as worries over supply (Libya back on line) and demand (rising second wave COVID cases) weigh.

Chart of the Day – DAX

The DAX has seen a retreat of the bulls once more as the trading range of the past three months has been reaffirmed. It is often said that equity markets can take the stairs to go higher but the elevator back down. We have seen this in mini format in the past couple of weeks as the market drifted higher before a sharp decline of recent days. The market has fallen hard after Tuesday’s reversal which left resistance at 13,150, back below a clutch of flat near to medium term moving averages and now risks a test of support at 12,540 once more. With the RSI turning lower again around 60 (having done so repeatedly over the past two and a half months), bullish momentum is failing, which means a growing lack of trend. As the DAX bulls have lost conviction, this is increasingly set up as a trading range. This is a chart now beset by false signals and means that for now, apparent breakouts should be treated with caution. There is a big downside gap that is wide open now at 12,975 which still needs to be filled. SO with the market forming support early today, a move to fill this gap in the coming sessions is likely. Holding support at 12,540/12,600 is initially important to protect the key July/September low support around 12,250/12,340. We continue to play the range and see this weakness is likely to be bought into for a rebound towards 12,960/12,975 in due course. 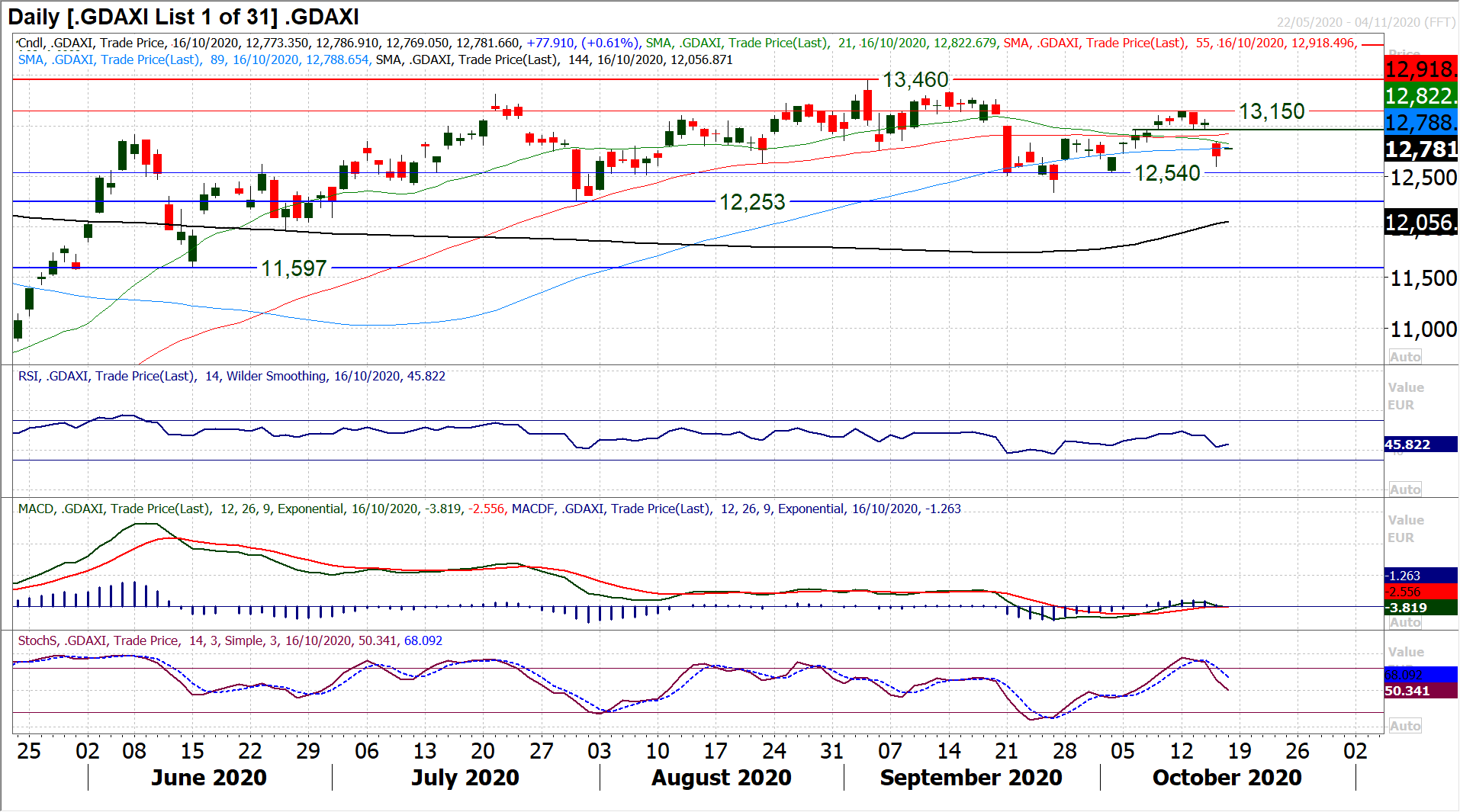 The now six week trading range between $38.80/$43.80 continues with a somewhat uncertain outlook. Yesterday’s session almost reflected this ranging phase in just one session, where initial sharp losses retraced almost entirely into the close to leave a small negative candle in the end. The market is just drifting off again today with a mild negative bias. Resistance at $43.55/$43.80 is clearly strengthening now, whilst the attraction of the mid-range pivot at $41.30 is almost magnetic too. As such, rolling over early today we look for a drift back towards $41.30 once more. A close above $43.80 is needed for the bulls to break this ranging outlook.

The Dow has pulled back over the past few sessions in a move that certainly gives the bulls something to think about. Breaking a three week uptrend risks further correction now, but the market will be looking at the reaction around the breakout support band 28,040/28,365. In this way, yesterday’s rally off 18,180 to leave a positive candle will bring a sense of optimism into today’s session, that the correction is again another chance to buy. The importance of this support band 28,040/28,365 is therefore growing. Trading above all the moving averages, which are rising, suggests that this is a bull market pullback which will be eyed as another opportunity to buy. The breakout support band is a prime buy zone now as momentum indicators begin to just unwind slightly from their positive positions. This outlook would certainly be questioned on a break below 27,730 (the first real higher low of the old three week uptrend). Forming another positive candle today would suggest a retest of 28,958 again. 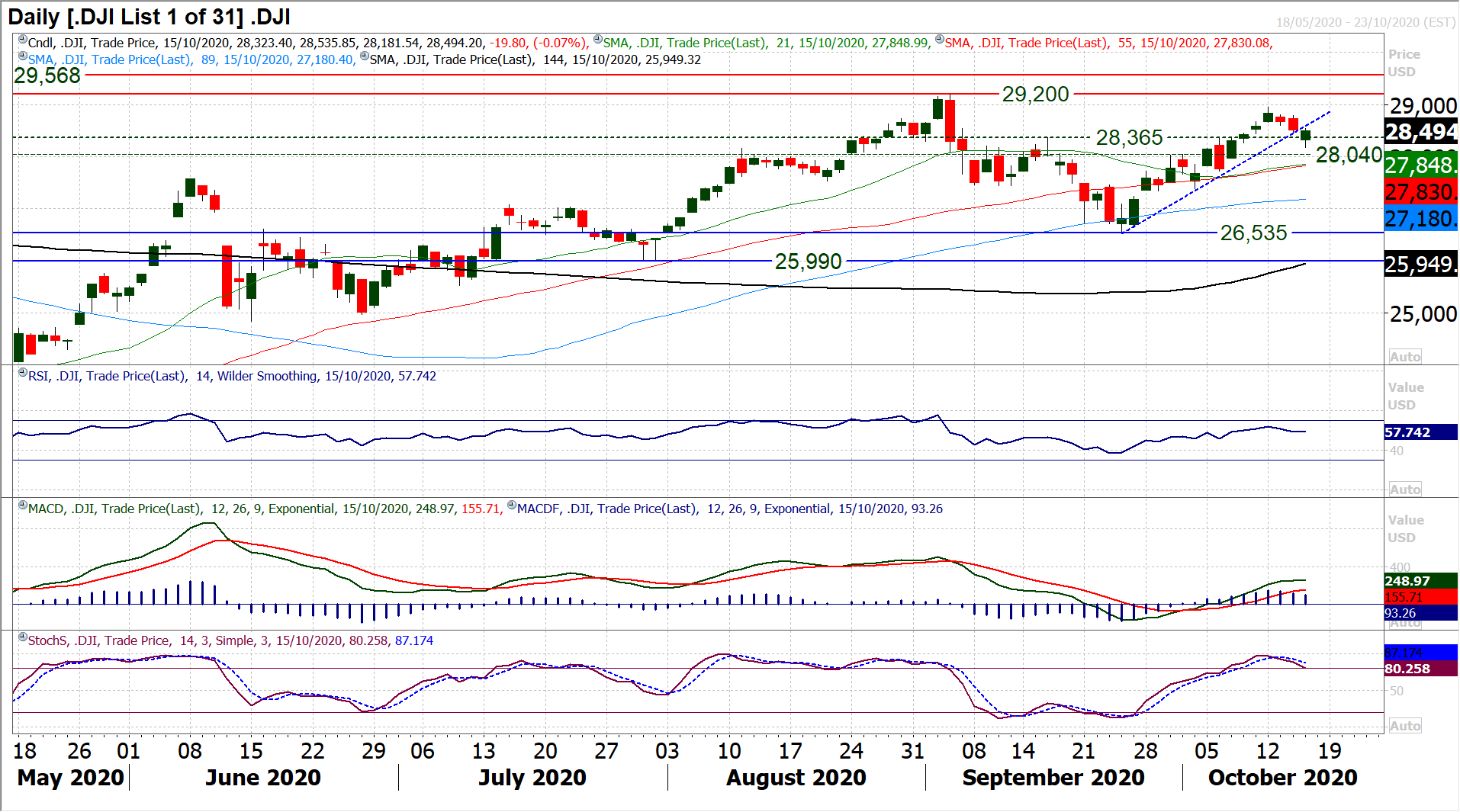