A weaker krona, above-expectation inflation readings, and a lack of scheduled meetings later this year, mean a 50bp rate hike from the Riksbank this Thursday looks highly likely. Any benefits for SEK may only show up at a later stage due to the current unstable risk enviornment.

The Riksbank's abrupt transformation from standout dove to hawk is almost complete. Having surprised markets with a 25 basis-point rate hike in April, policymakers are highly likely to step up the pace and hike interest rates by 50bp this week, for two key reasons:

Firstly, the simple fact is that the Riksbank holds fewer meetings each year than other central banks, and that means it has to make each one count. The ECB is poised to hike twice before Swedish policymakers meet again in September, and the Riksbank will want to get out in front – not least given the recent depreciation in the krona.

Secondly, the Riksbank laid out a few scenarios in April, one of which showed what would happen if core inflation came in above their central forecast at the time. Since then, recent core CPIF readings have come in higher than even this more hawkish scenario, which policymakers said at the time would justify a faster pace of tightening. Sweden is also building up to crucial wage negotiations early next year, and all the signs suggest a tight jobs market will yield a higher wage growth outcome than in previous years.

Core inflation has exceeded even the RIksbank's 'high inflation' scenario

A 50 basis-point hike seems very likely, and we could also feasibly see the Riksbank's new interest rate projection pencil in two further 50bp moves in September and November respectively. Policymakers will be aware that, despite roughly 100bp additional tightening being priced into the Swedish swaps curve since the April meeting, SEK is a little weaker than it was back then. However officials will need to balance this newly-found hawkishness against early signs of weakness in the housing market, where a little under half of new loans are on floating rates.

In short, a 50 basis-point hike at this meeting, and probably another in September, look likely. What comes thereafter is less certain, given growing concerns about global growth and our view that both the Fed and ECB will largely be done with tightening by the turn of the year.

A more aggressive monetary tightening cycle by the Riksbank and a widening gap with the ECB is undoubtedly arguing for a weaker EUR/SEK. As shown below, the last time the 2-year swap spread between the EUR and SEK was this negative, EUR/SEK was trading around 8.50. 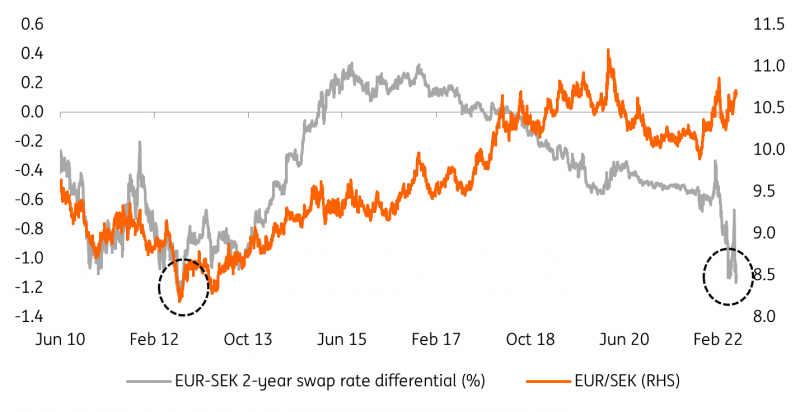 Surely, the current market conditions are very unique, and EUR/SEK is, like many other currency pairs, being driven by many other factors outside of the simple policy rate differential. The environment for global equities is likely to remain challenging due to the combination of global slowdown fears and tighter monetary conditions, and the relatively illiquid (to other G10 FX) and high-beta krona should in our view struggle to stage a sustained rebound in the near term.

We'll need to wait for a considerable stabilisation in global risk sentiment (that may only happen in 4Q) to see EUR/SEK re-connect with its rates differential, which unmistakenly argues for a weakening of the exchange rate. We still don't exclude a return to 10.10-10.20 by the end of this year, with the Riksbank's policy being a major driver of SEK restrengthening.

Read the original analysis: Riksbank set to hike 50bp in a bid to get ahead of the ECB