Over the past month, dozens of companies have said they had plans to build new factories or start new manufacturing projects in the U.S. Idaho-based Micron Technology Inc. announced a $40 billion expansion of its current headquarters and investments in memory manufacturing. Ascend Elements said it would build a $1 billion lithium-ion battery materials facility in Kentucky. South Korean conglomerate SK Group said it would invest $22 billion in a new packaging facility, electric vehicle charging systems, and hydrogen production in Kentucky and Tennessee.

“We think it’ll be a long-term trend,” said Jill Carey Hall, U.S. equity strategist at Bank of America Corp. ”Before Covid there was…a little uptick but obviously Covid was one big trend and you’ve seen a continued big jump up this year.”

To be sure, globalization has been a tailwind for investors and large companies for much of the past 30 years, particularly U.S. firms. Increased trade across borders boosted profits and productivity and allowed countries to focus on the goods and services they were best equipped to produce. Globalization has also provided multinational companies with new customers and new pools of low-cost labor.

However, the broad shift might not be an outright win for blue-collar American workers. Increased capital spending suggests many companies could be looking to replace overseas workers with technology rather than with U.S.-based workers, according to Bank of America. Capital expenditures are often investments in equipment or technology that automate the tasks of workers.

“There’s no question that companies, when they bring jobs back, they know they’re going to be paying three to five times as much for labor,” said Harry Moser, the founder and president of the Reshoring Initiative. “Therefore they have to automate.”

North American companies ordered a record 11,595 robots, worth $646 million, in the first quarter, putting 2022 on pace to surpass last year’s record numbers, according to the Association for Advancing Automation. 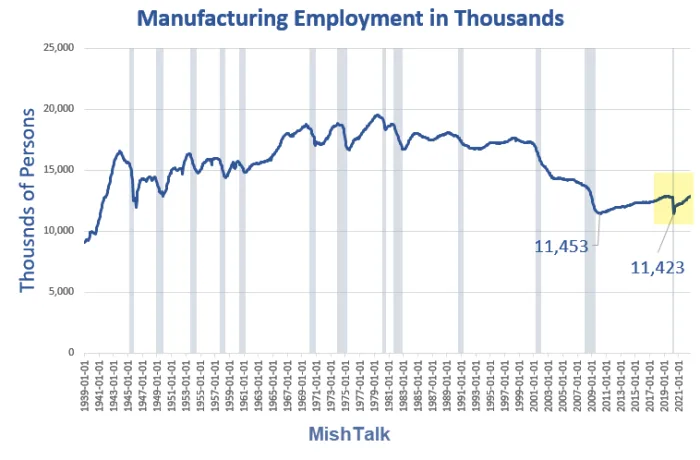 Manufacturing employment data by the BLS, chart by Mish

Manufacturing employment in the US appears to have hit a secular low of 11.423 million in the Covid pandemic, barely undercutting the 2010 low of 11.453 million. 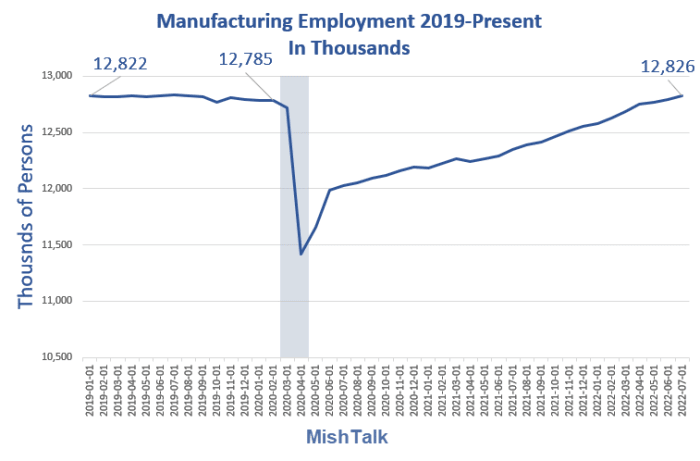 Manufacturing employment data by the BLS, chart by Mish

Manufacturing employment is now ahead of the pre-pandemic level. 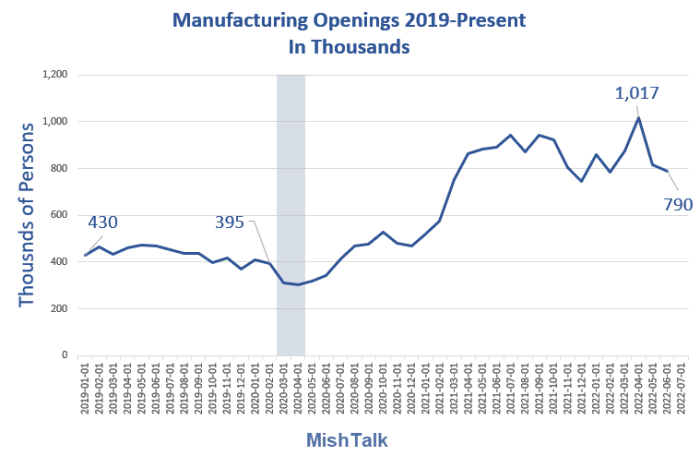 Globalization is in retreat. The plus side is jobs. The negative side consists of inflation and pressure on corporate profits.

That's another reason to not expect the Fed to soon come to the rescue with QE and lower rates.

Also consider De-Globalization: New Supply Chains Are Inefficient and Will Drive Up Inflation

Housing will lead the next recession (one that I think has already started).

But the end of globalization is another reason to expect minimal rise in unemployment.

Cyclical Components of GDP, the Most Important Chart in Macro

If you missed it, please note Cyclical Components of GDP, the Most Important Chart in Macro

Housing leads recessions and recoveries and housing rates to be weak for a long time.

Add it all up and you have the opposite of the Covid-recession, a long period of economic weakness with minimal rise in unemployment.

For discussion, please see Expect a Long Period of Weak Growth, Whether or Not It's Labeled Recession

It does not matter whether you label this a recession or not. But expect very weak growth, a Fed restrained by inflation, and thus weak corporate profits as well.