The Reserve Bank of Australia has a monetary policy this Tuesday, and while the central bank is expected to remain on hold, speculative interest is anticipating a dovish stance, paving the way for more easing coming in the near term.

The cash rate in Australia stands at a record low of 0.25% since March when the RBA also announced it was implementing yield curve control.  Policymakers announced a target for the yield on 3-year Australian Government bonds of around 0.25%. Back then, they announced these measures would remain until  “progress is being made towards  the Bank's goals of full employment and the inflation target.”

Growth not consistent with RBA’s objectives

Also in March, the RBA established a  Term Funding Facility (TFF) to offer three-year funding to authorised deposit-taking institutions, mean to support the supply of credit to household and business, which was expanded in September.

Between March and September, the RBA was convinced that economic developments weren’t as bad as initially expected, sounding mostly optimistic meeting after meeting. However, things changed when the second wave of coronavirus hit the country and local lockdowns came into place.

In its latest speech a few weeks ago, Deputy Governor Guy Debelle said that “the outlook for inflation and employment is not consistent with the Bank’s objectives over the period ahead,” adding that the recovery  “has not been a rapid bounce but more of a slow grind.”

In this scenario, speculation mounts that policymakers are preparing some new stimulus measures that may include cutting the cash rater further and expand asset purchases on longer-term bonds to lower the long-term yields and curb the appreciation of the Aussie.

The Australian dollar remains stubbornly high, with AUD/USD trading near 0.7200, roughly 200 pips away from its yearly high at 0.7413. Recession is not exclusive for Australia, as the world has to deal with the pandemic.  The USD, in the meantime, trades alongside sentiment amid its safe-haven condition.

Ahead of the event, the market is in an upbeat mood, hoping the US Congress will be able to clinch a deal and that US President Trump will recover from COVID-19. The optimism underpins AUD/USD which may suffer a sharp setback, should policymakers decide to act as soon as this October. Chances of this happening, however, are quite a few.

Hints on future action in the near term may hit the Aussie, although it seems unlikely that any central bank will be able to overshadow sentiment-related trading. An optimistic RBA seems unlikely, but if it happens, and the greenback remains under pressure, the AUD/USD pair may get a boost and near the mentioned yearly high. 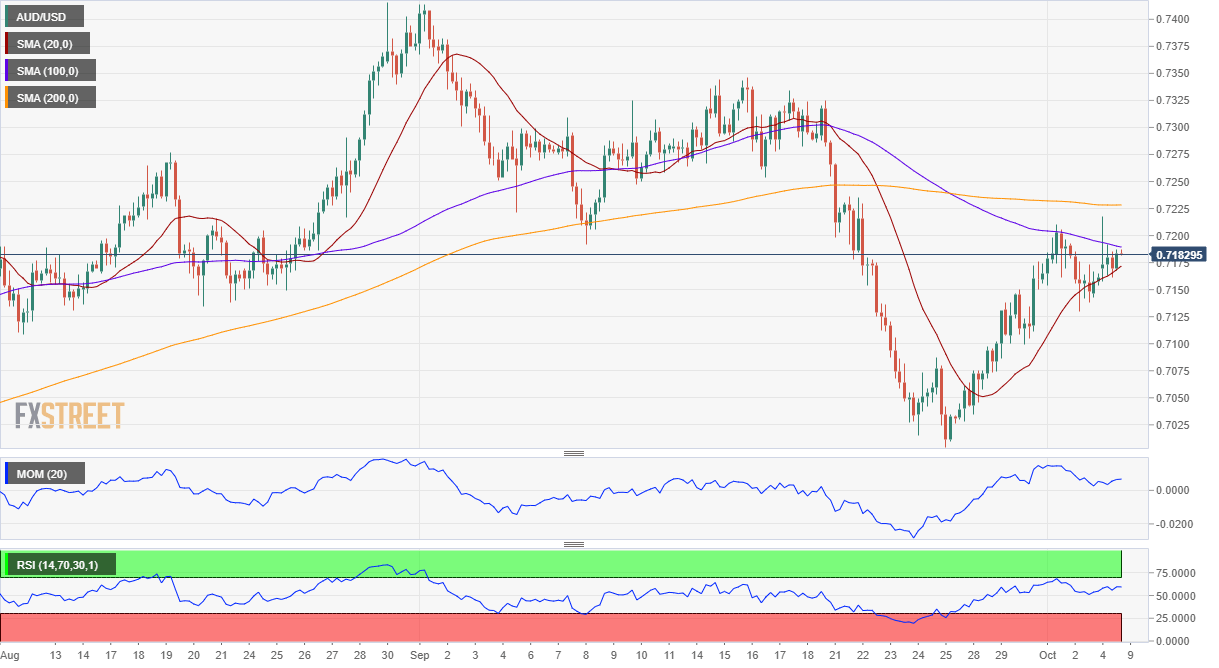 GBP/USD trims the first weekly gain in five near mid-1.2400s ahead of UK Retail Sales

GBP/USD takes offers to renew intraday low near 1.2445, paring the biggest weekly gains in five during Friday’s Asian session. The cable pair cheers broad US dollar weakness the previous day but Brexit headlines join the pre-UK Retail Sales anxiety to weigh on the quote of late.