Powell is apparently between a rock and a hard place. Inflation surged, while the global economy slowed down. What will he do? And how will gold react?

The consumer price index climbed 0.3 percent last month, after rising 0.1 percent in September, according to the U.S. Bureau of Labor Statistics. It was the biggest rise since January, and it was mainly caused by an impressive surge in the fuel oil (+3.7 percent) and gasoline indices (+3 percent). However, the core CPI, which excludes food and energy, also rose, advancing 0.2 percent in October, following a 0.1-percent increase in September. Over the last 12 months, the consumer prices jumped 2.5 percent, compared to 2.3 percent increase in September. The rebound was mainly caused by a notably bigger increase in energy prices. Hence, the index for all items less food and energy climbed 2.2 percent, the same as last month, as the next chart shows. 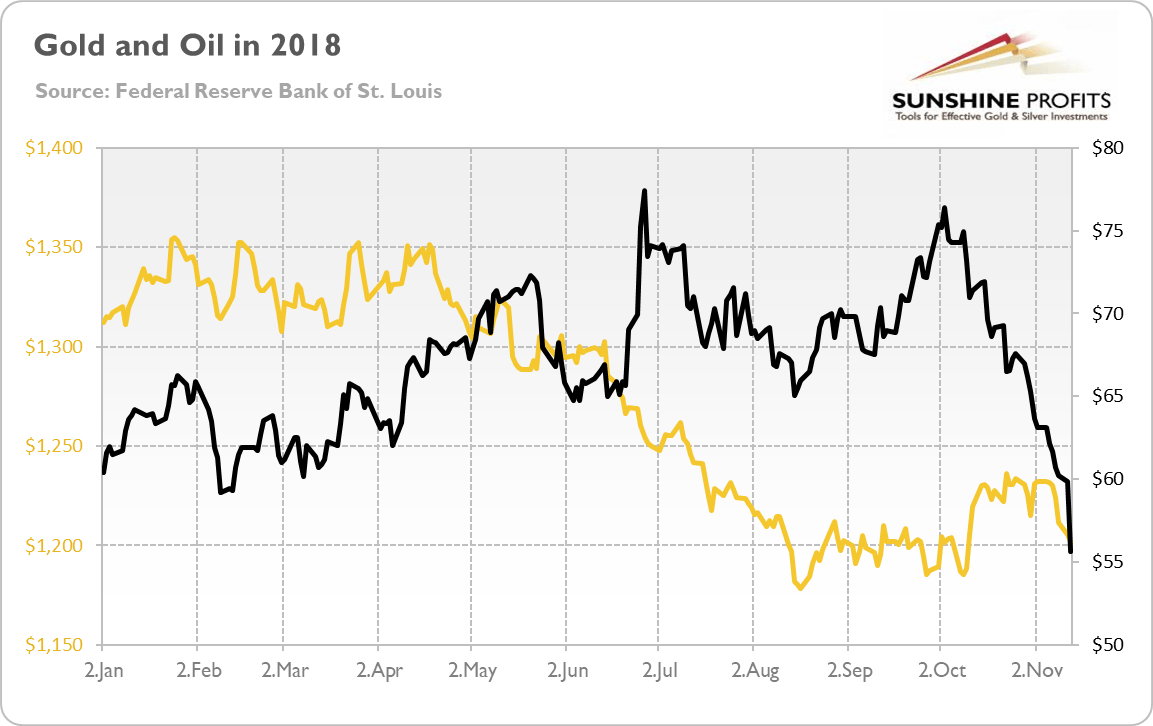 How do interpret this data? Well, the inflationary pressure intensified somewhat in October. However, the acceleration was mostly driven by large increases in energy prices. Which are quite volatile – as the next chart shows, the price of oil fell in November, which is likely to result in lower energy prices and softer pressure on inflation in the next month. 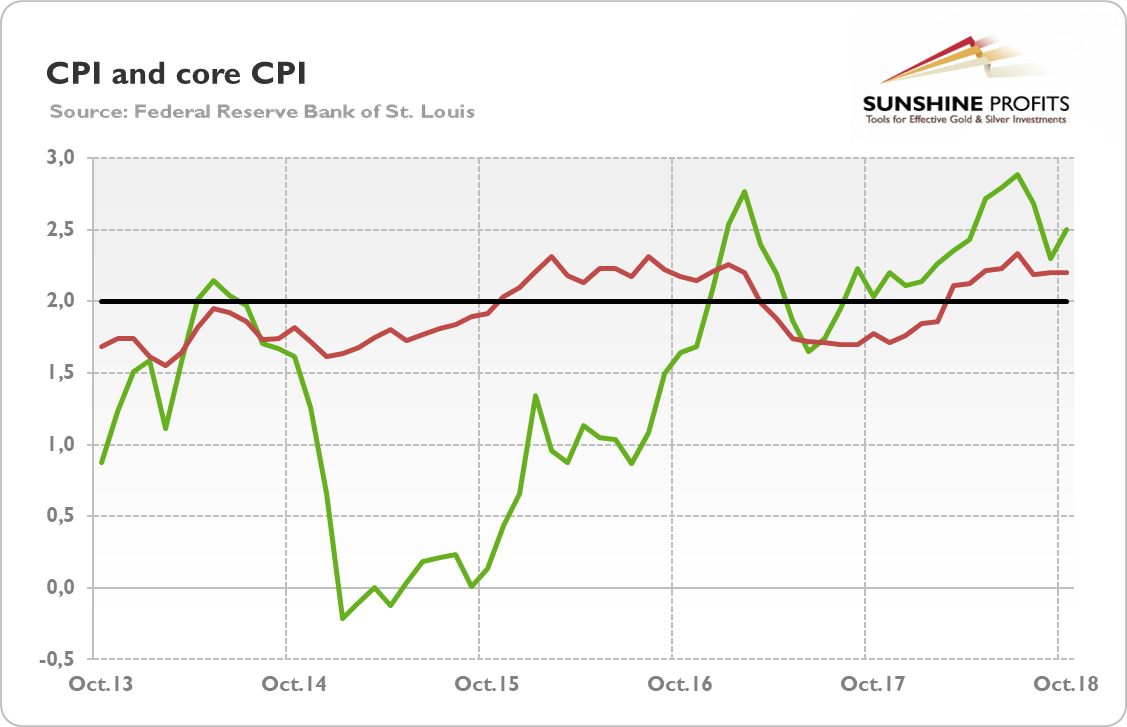 Hence, we claim that the US inflation remains limited and the Fed is not likely to be worried about it. Given the recent pullback in oil prices, inflation is unlikely to rise much further from the current level, at least for now. Therefore, we expect the US central bank to continue its policy of gradually hiking interest rates. Rising rates should support the greenback, which is negative for the gold prices.

However, the Fed officials have made cautious comments recently. On Friday, both Fed Vice Chair Richard Clarida and Dallas Fed President Robert Kaplan raised concerns over a potential global slowdown.

The former said that the federal funds rate is close to being neutral, so the further increases should be more based on economic data, especially that global economy might slow down:

As you move in the range of policy that by some estimates is close to neutral, then with the economy doing well it's appropriate to sort of shift the emphasis toward being more data dependent (...) Going forward, you have to look at a lot of trends, including the global economy... Some of it is slowing.

Clarida's remarks were first public comments since being confirmed in September, and they indicate that he might be less hawkish than Powell.

Meanwhile, Kaplan argued that the US economy would face headwinds next year as the big boost from fiscal policy (Trump's tax reform and elevated government spending) would begin to fade. He also noted the global risks:

It's my own judgment that global growth is going to be a little bit of a headwind, and it may spill over to the United States.

Powell seemed to be less worried about the US economy last week:

I'm very happy about the state of the economy right now (..) We're in a good place, and I believe our economy can grow and grow faster.

And indeed, so far, so good. US industrial production inched up in October, while the retail sales surged last month. However, Powell acknowledged that the global economy was slowing and considered it as a concerning fact. If the global factors become an important concern for the FOMC, it may become more dovish, which could support the gold prices.

After recent comments from the Fed officials and reports on inflation, many analysts argued that Powell was between rising inflation and slowdown in global economy. However, that's not accurate description. Inflation rose in October, but mainly because of jump in energy prices. The core inflation remains stable and the overall CPI may ease in the near future, given the fall in oil prices in November.

And although the Fed officials noted global slowdown, they still sounded upbeat about the US economy and called for gradual normalization of the monetary policy.

Hence, the conclusion is clear: do not expect higher gold prices due to the surge in inflation or dovish revolution within the FOMC. Actually, given the drop in oil prices and historically strong correlation between oil and gold (see Chart 2), we could rather expect downward moves in the yellow metal later this year.