Sterling was the talk of the town across currency markets for all the wrong reasons during Monday’s trading session, thanks to mounting political uncertainty in the United Kingdom.

The Sunday Times newspaper reported over the weekend, that as many as 40 Conservative MPs have agreed to sign a letter of no-confidence in Theresa May. Although this was eight short of the signatures needed to trigger a formal leadership challenge, this is likely to add to the bucket load of uncertainty, translating into more pain for the British Pound. With political instability at home stimulating concerns over May’s ability to govern and deliver Brexit, Sterling may have a very rough and rocky road ahead. The price action suggests that sentiment towards the Pound remains bearish, despite November’s rate hike. Further downside is likely to be on the cards, on the back of political jitters and Brexit risk.

Taking a look at the technical picture, the GBPUSD has stumbled into the trading week under noticeable selling pressure, with bears eyeing 1.3050. Technical lagging indicators such as the MACD and 50 Simple Moving Average, both point to further downside. A decisive break down below 1.3050 may encourage a further decline towards 1.3000 and 1.2960, respectively. 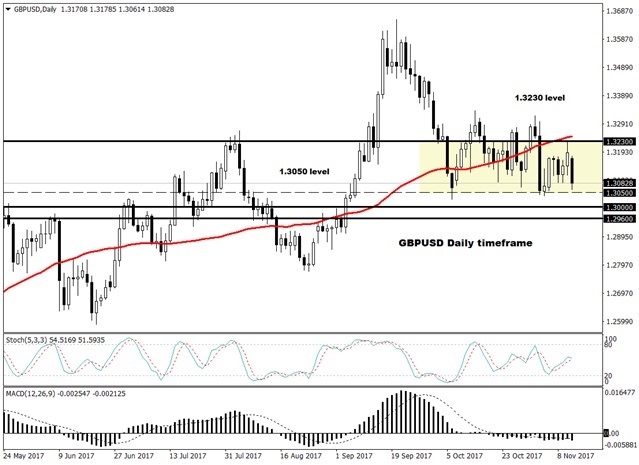 The Dollar appreciatedslightly against a basket of currencies on Monday, as investors continued to ponder over the fate of the proposed U.S tax reforms.

With the Greenback becoming increasingly sensitive to expectations of proposed U.S. tax reforms, any positive, or negative, news on these developments has the ability to spark volatility. Focusing on the technical picture, the Dollar Index is under some selling pressure on the daily charts. Sustained weakness below 94.40 may encourage a further decline lower towards 94.00. In an alternative scenario, a breakout back above 94.70 may trigger an incline towards the 95.10 resistance.

A firmer Dollar,coupled with expectations of a rate hike by the Federal Reserve in December,may have slightly obstructed Gold’s recovery during Monday’s trading session, with prices trading below $1280 as of writing.

This yellow metal remains a battleground for bulls and bears and as such, is likely to translate into prices trading in a wide range. While bulls may find support from political risk and geopolitical tensions, bears are poised to be inspired by expectations of higher U.S. interest rates and a stabilizing Dollar. With the economic calendar fairly light today, price action may dictate where the yellow metal trades. From a technical standpoint, previous support around $1280 has the ability to transform into a dynamic resistance that triggers a decline back towards $1267. Alternatively, a breakout above $1280 could open a path towards $1289 and $1300, respectively. 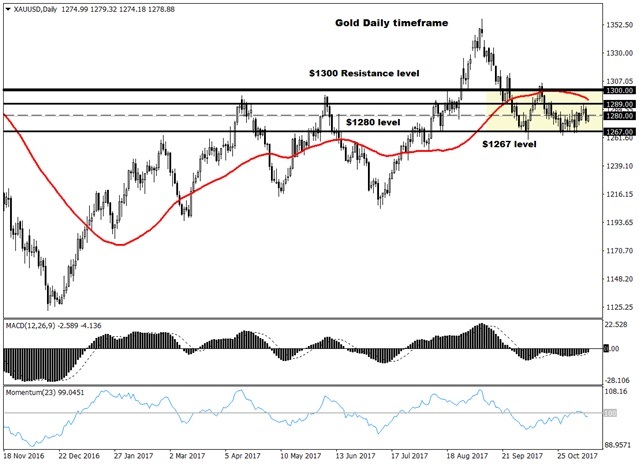