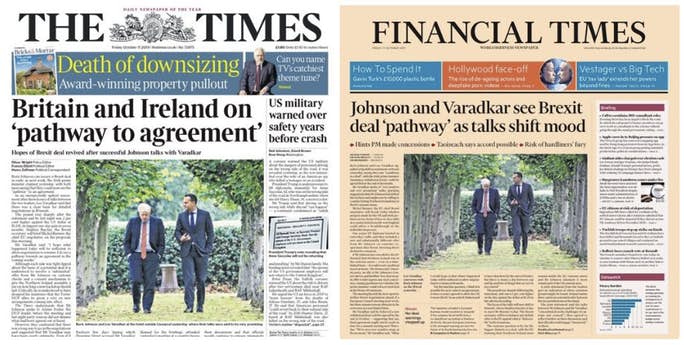 The British Pound jumped the most in 11 months on the news Varadkar Says Brexit Deal is Possible.

No sign as yet what the ERG/Tory Brexit die-hards, might make of a Johnson-reached deal with concessions over NI customs arrangements. One such Tory MP tells me they are "keeping an open mind" until more details emerge.

The British Pound jumped the most in 11 months on the news Varadkar Says Brexit Deal is Possible.

Back in Dublin, @simoncoveney says “significant Amount of work to be done” to seal Brexit deal - but can be done before end of October

Having watched EU politics for years, I am not at all surprised by news Varadkar says new agreement 'possible' by end of October after talks with Johnson.

"For the first time in months, there is a more optimistic tone in tomorrow’s newspapers on the prospect of a deal being reached with the EU."

This is very typical of EU politics as I have commented many times.

Despite the hardening language of just a day ago, after a meeting between Johnson and Varadkar, a deal is suddenly back in play.

Did Johnson give in on something? Yes, he had to. Giving the DUP a veto was never going to fly.

Anything more is difficult to say.

Did Ireland give in on something. That's not certain, but it's possible, if not likely.

If Johnson does produce a deal, it may come with a do or die proviso.

If so, there will be no further extensions.

Parliament will have to accept the deal or face a No Deal result on October 31.

Perhaps there is a short extension into November or even January 31, 2020 but only to tie up loose ends.

I suspect the UK parliament would agree to the deal on those conditions. If not, No Deal on October 31.

There is a small chance that the European Parliament rejects the deal after approved by the UK. The result would be the same: No Deal.

What did Johnson give away? The EU?

If there is a deal, we will find out shortly.

But here we are, discussing a deal that most thought "impossible".

I never thought that, noting many last second EU deals, but it sure looked grim just a day ago.