Outlook: It will be nice to see import prices down, but trade has a lesser effect on the dollar with every passing year. What will get attention is the University of Michigan consumer sentiment index, expected to rise to 52.5 in Aug from 51.5 in July (and 50 in May). Ho hum. The data gets far more attention than it deserves because the survey covers only about 500 people and regular people don’t know much, anyway.

That applies to the one-year inflation expectations, too, forecast down to 5.1% from 5.2%, barely enough to mention. The 5-10-year survey forecast is seen slipping to 2.8% from 2.9%. This would put in back to April 2021, according to Bloomberg., Big deal.

Bloomberg also notes “The two-year breakeven (difference between the conventional yield and the inflation-protected security) peaked in March near 5% and this week reached 2.70%, its lowest since last October. It is near 2.80% now.”

Again, this is more wishful thinking than based upon any professional economics modelling or even common sense, especially now that we have several outpfits, including various regional Feds, delivering “sticky” inflation estimates.

That means the drop in the probability of the 75% Sept rate hike from 75% at the start of the week to 47% now is an idea built on sand. The same thing applies to the year-end rate expectation down to 3.52% from 3.56%.

Rapid see-sawing in inflation expectations and the resulting effect on yields is a snare and a delusion. No one knows better than the Fed that one or two data points suggesting the peak has passed cannot be trusted. The Fed simply must stick to its plan, if it can becalled that, to hike three more times this year and hang on to those hikes well into Q1 2023. 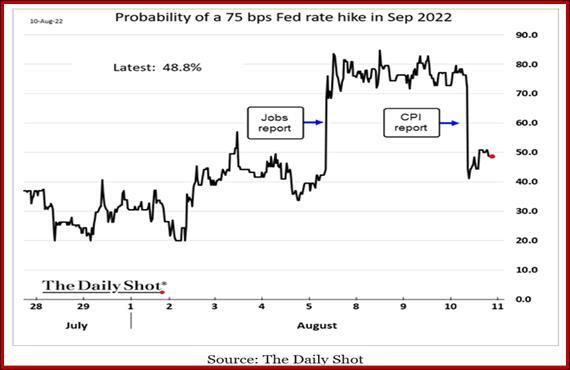 It’s possible, just, that a glimmer of acknowledgment of that idea is behind the slight improvement in the dollar. For that purpose, it’s the 2-year that needs watching. See the Market Watch chart. It’s not much, but the drop in yield followed by a rise in yields one day later implies great uncertainty. Chandler notes “The two-year note yield fell almost 25 bp in the last two weeks of July and jumped 34 bp last week. It is virtually flat this week around 3.22%.”

In a nutshell, some of the hopeful are staging a fistfight with some of the reality-checkers. The spillover to FX is occurring mainly in the dollar/yen, chiefly because we have an anchor there–the fixed BoJ curve-control policy.

As for what’s happening elsewhere, the retreat in the big gainers, especially currencies like the AUD, is scary. We could be looking at a dying flash in the pan. We expect a retreat after a big move, but we need it to end and PDQ if the new trendlette is going to thrive. So far we have about a 25% retracement of the big move on Wednesday. Today may not tell us whether it ends or persists because it’s a Friday in the bowels of summer. We are at risk of the dollar recovering more than “normal.” Don’t laugh, but this is where old-fashioned support and resistance lines can come in handy, especially if they coincide with indicators like the B band.