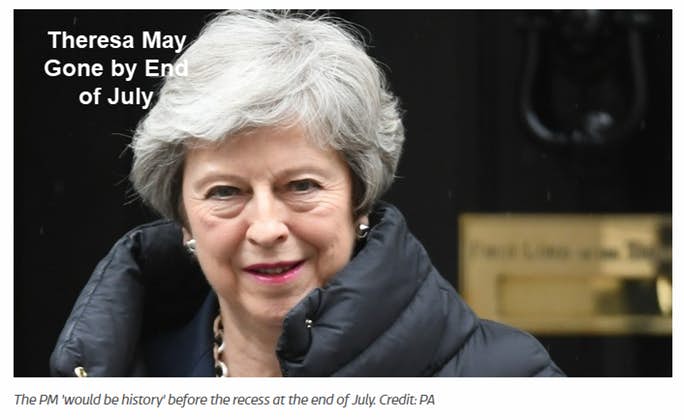 There have been many rumors of May's demise, yet she is still Prime Minister. Peston's theory is well founded and Eurointelligence agrees.

"There will be, one way or another, a way of getting her out in June and there will be a leadership election which will see a new Tory leader and prime minister appointed by the summer."

That is what ITV News Political Editor Robert Peston says some Tory MPs told him following another meeting of the 1922 Committee, in which the Theresa May's departure was discussed.

Instead of gaining assurances from committee chairman Sir Graham Brady for details of the PM's departure, Peston was told the MPs received a "commitment" that she'll bring her deal back before Parliament before the EU elections.

Also consider How Tory MPs Set a Trap for May.

The 1922 executive committee thinks it has finally laid a surefire trap for the PM Theresa May - by securing a promise from her to hold the second reading of the core Brexit legislation, the Withdrawal Agreement and Implementation Bill, before EU elections in two weeks.

The point is that either the bill passes, and she resigns as soon it becomes law (as she has promised to do), or it flops, which is what most Tories expect, and it becomes unambiguously clear that she can never deliver Brexit - in which case they will force her out in June or July.

May yesterday appeared to have a cut a private deal with Graham Brady, chairman of the Tory Party's 1922 committee of backbenchers. As part of it she will bring the second reading of the Withdrawal Agreement and Implementation Bill before the House of Commons before the European elections on May 23 - i.e. in less than two weeks. This time we agree with Robert Peston's analysis: either the bill passes, and she resigns; or the bill does not pass, and she resigns. They've got her, finally. Peston believes the Tories will probably initiate leadership proceedings in the beginning of June - a process that would take about two months from start to finish.

We are less confident than him about the exact timetable, but agree that May's political time is now drawing to a close. Her last chance of a dignified exit would be a deal with Corbyn. Expectations are extremely low. There are media reports that Labour is about to pull the plug on the still-ongoing talks because of a lack of progress. But, as we keep writing, both Corbyn and May are cornered and those who are hell-bent against a compromise are in a minority on both sides. One needs to consider that, by the time the Commons votes on the bill, Brexit and May's future will be disentangled. We will be in a different scenario. Two weeks is a very, very long time in politics.

Good Riddance. This is long overdue.