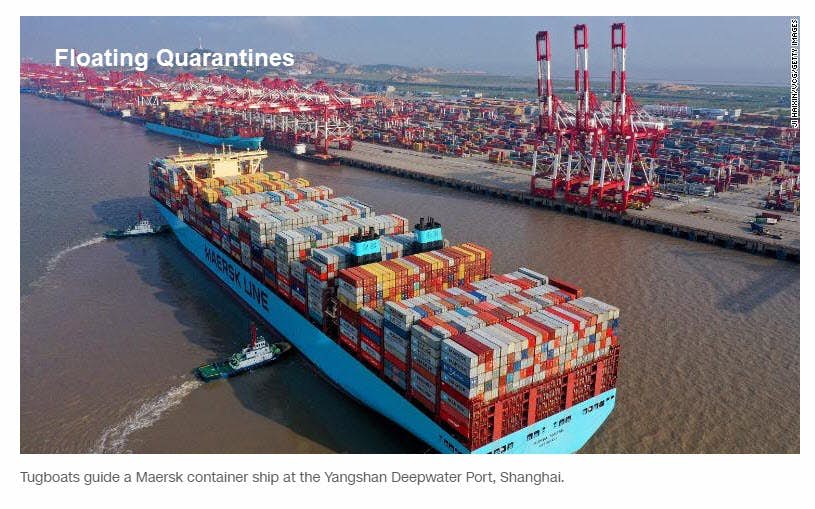 Global manufacturing, including the iPhone, is under severe strain because of coronavirus related work stoppage.

China is effectively shut down and goods are now stranded in floating quarantines.

Nearby countries like Japan and South Korea are hit hardest but Global Shipping Disruptions will spread fast.

About 80% of world goods trade by volume is carried by sea and China is home to seven of the world's 10 busiest container ports, according to the United Nations Conference on Trade and Development. Nearby Singapore and South Korea each have a mega port too.

"A closure of the world's manufacturing hub impacts container shipping at large, as it is a vital facilitator of the intra-Asian and global supply chains," said Peter Sand, chief shipping analyst at BIMCO, an international shipping association. "This will affect many industries and limit demand for containerized goods transport," Sand told CNN Business.

The shutdowns mean that some ships can't get into Chinese ports, as the loading and discharging of goods slows, said Guy Platten, secretary general of the International Chamber of Shipping, a trade body. Others are stuck in dock, waiting for workers to return to ports so that construction and repairs can be completed, Platten added.

Still more vessels are idling in "floating quarantined zones," as countries such as Australia and Singapore refuse to allow ships that have called at Chinese ports to enter their own until the crew has been declared virus-free, added Sand. Platten said he knew of at least one crew that is running low on food because their ship has been idled for so long.

Giant shipping companies such as Maersk, MSC Mediterranean Shipping, Hapag-Lloyd and CMA-CGM have said that they have reduced the number of vessels on routes connecting China and Hong Kong with India, Canada, the United States and West Africa.

IAG Cargo, the air cargo arm of British Airways parent IAG, on Monday canceled all services to and from mainland China for at least the remainder of the month, citing a UK government travel advisory, according to a statement on its website.

Shipping Down 20% in China Ports

“The full impact of the Chinese coronavirus outbreak on container volumes will not be fully measurable until ports announce their throughput numbers for the first quarter, but data collected on weekly container vessel calls at key Chinese ports already shows a reduction of over 20% since 20 January,” Paris-based Alphaliner said in the report, released late Tuesday.

“As far as box volumes in China, we see a fall of around 23% over the past three weeks as the country is gradually shutting down,” said Wang Lei, a broker in Shanghai, the main gateway for Chinese exports and the world’s busiest seaport with some 42 million containers a year.

“Workers from crane operators to customs officials and truck drivers are staying home,” Mr. Lei said. “It’s always slower during the Lunar New Year holidays, but this is something else. People are afraid to interact and it’s killing business.” 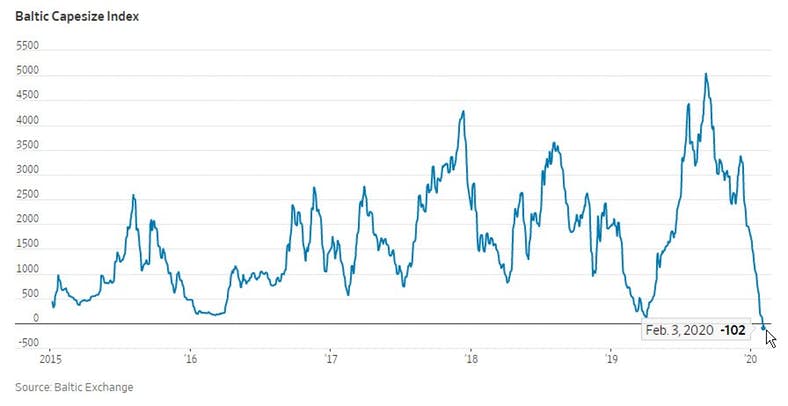 The Baltic Exchange’s capesize index, which constitutes part of the Baltic Dry Index—an important proxy for the world’s shipping market—extended deeper into negative territory Monday, after slipping below zero for the first time ever on Friday.

Capesize vessels move products such as iron ore and coal from mines in Latin America and Australia to Europe and China. The index tracking them plunged from minus 21 points to an all-time low of minus 102 on Monday, a Baltic Exchange spokesperson said.

The broader Baltic Dry Index, which tracks global shipping rates, fell to 466 on Monday, its lowest level in four years.

If the rate is negative, someone is paying you to take the ship.

The airlines, carmakers, and phone makers are already in trouble, especially Hyundai and Apple.

Shipping disruptions to the US will hit the West coast ports no later than March.

But hey, let's pretend this is no worse than an average flu.