A ‘risk-on’ vibe is sweeping across financial markets after the US Trade administration (USTR)announced thatit will remove some items from its target list and delay the 10% tariffs on certain Chinese goods until December.

This unexpected development is stimulating risk appetite while reviving hopes that the two largest economies in the world will eventually find some middle ground on trade. Asian stocks rallied on Wednesday thanks to the improving market mood and this positivity should support European shares.

While this burst of positivity and renewed optimism over China and the United States resuming trade talks in two weeks is good news for global sentiment, investors should remain cautious. It is worth keeping in mind that the US is still moving forward with 10% tariffs on much of the $300 billion in Chinese imports first disclosed in May. Global equity bears can still make an unwelcome return if tensions arise before the scheduled talks in two weeks, especially if geopolitical risks and global growth concerns dent investor confidence.

Chinese Yuan roars back to life

A return of risk appetite sent the offshore Yuan marching to a fresh one-week high against the Dollar on Tuesday.

The USDCNH tumbled below the 7.00 level as easing trade tensions boosted investor appetite for the Chinese Yuan. However, appetite towards the currency was later dampened on Wednesday by disappointing retail sales figures and industrial output figures, which fell to its slowest rate in 17 years in July. Nevertheless, the offshore Yuan still has potential to extend gains against the Dollar as easing tensions sweeten appetite for emerging market currencies. The USDCNH has scope to test 7.00 should 7.05 prove to be reliable resistance.

Oil bulls wasted no time in shifting to a higher gear on Tuesday following the Trump administration’s unexpected pull-back from a hardline stance on Chinese trade.

Oil prices have scope to push higher as easing trade tensions reduce fears over slowing global growth and faltering demand for Crude. The improving market mood should also support WTI Crude with prices trading around $56.35 as of writing.  The daily close above $56.50 should encourage a move higher towards $57.43.

Gold lost some of its allure on Tuesday, depreciating almost $50 from a 6-year high at $1535 after the United States surprised markets by delaying tariffs on some Chinese goods.

While Gold is seen extending losses in the near term amid the risk-on mood, the precious metal remains shielded by various core market themes. For as long as geopolitical tensions, Brexit uncertainty, global growth concerns and central banks easing monetary policy remain key themes, Gold bulls are in control.

Technical traders will continue to monitor how prices behave above the $1485 level. A breakdown below this point may open a path back towards $1470. 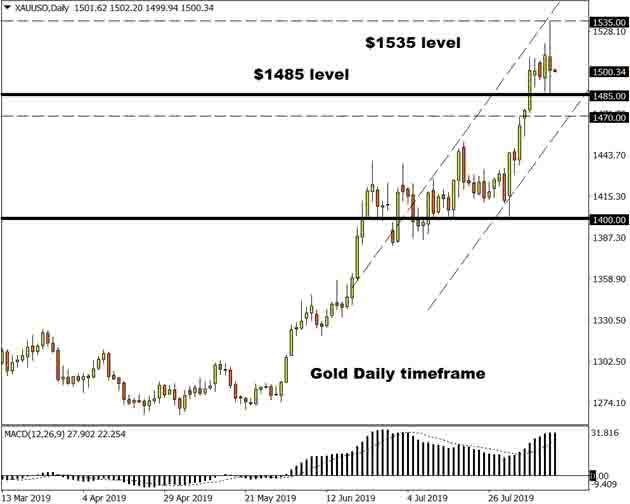