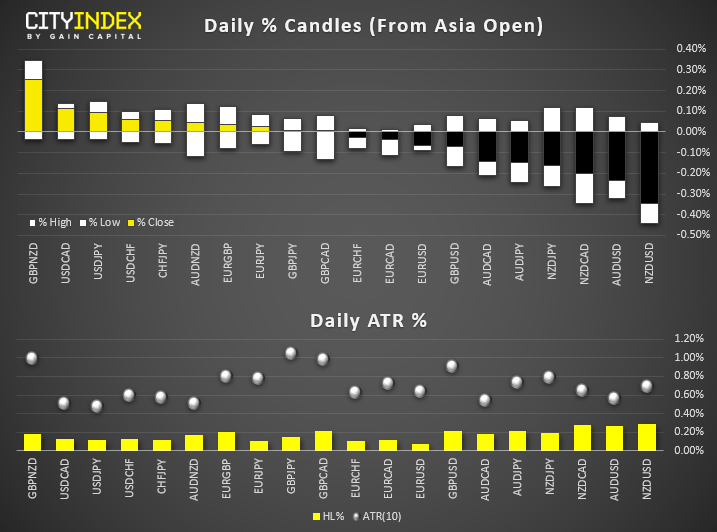 Oil prices reside near yesterday’s low, although volatility remains subdued ahead of a press conference from the Saudi Defence Ministry (expected 14:30 GMT), where reports suggest evidence of Iran’s involvement will be presented.

On trade, Trump and Abe are due to meet on 25th September according to Larry Kudlow.

Japanese exports contracted for a 9th straight month, declining -8.2% YoY versus -1.6% prior.

The US dollar index is trading just off-of yesterday’s lows, which weakened on news that the Fed had performed their reverse repo program. Trading water ahead of today’s FOMC meeting, it’s a toss up as to whether the meeting or the funding squeeze could be the bigger headline.

NZD and AUD are against the weakest currencies, USD is the strongest. Minor ranges overall though, as one tends to expect in Asia (and probably Europe) ahead of an FOMC meeting.

Ripple and Ether are the strongest major cryptos, up 12.5% and 8.2% respectively, with Bitcoin lagging at a mere -0.4% for the session.

USD/CHF is back below 0.9952 resistance following yesterday’s bearish pinbar. USD/JPY remains above 108, although a smaller, bearish pinbar also shows a hesitancy to push higher ahead of the FOMC meeting. AUD/USD remains above key support at 0.6832, making it a pivotal level for today’s potential fireworks. 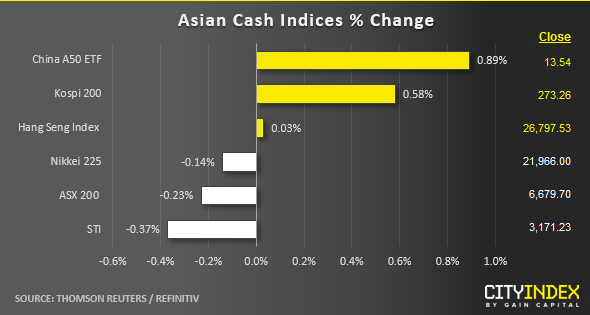 Asian stock markets are showing mix performance as at today’s Asia’s mid-session where market participants wait for the outcome on Fed FOMC decision later and continue to digest oil related news flow on the recent Saudi oil attacks. Oil prices have retreated after Saudi Arabi said that its oil production would be restored in full by the end of Sep.

South Korean technology stocks are leading the gains so far despite the on-going trade tension with Japan over the imports of strategic technology related materials. Samsung Electronics, the highest weightage component stock in the Kopi 200 has staged an up move of 1.49% today.

Hong Kong’s Hang Seng Index has managed to halt its previous two days of consecutive decline with the help of AAC Technologies, an Apple supplier that rallied by 10% on higher than expected pre-orders for Apple’s latest iPhones. Secondly, on the backdrop of positive sentiment where brewer AB InBev has revived its Hong Kong’s IPO after it was shelved earlier in July. Right now, it has aimed to raise up to US$ 6.6 billion down from its earlier US$9.9 billion but it still ranks as the world’s second largest IPO for 2019 so far.

AB InBev is expected to price the Hong Kong IPO on 23 Sep and start trading on 30 Sep with Singapore’s sovereign wealth find, GIC to invest US$1 billion in the IPO as a cornerstone investor.

The Federal reserve meeting is the main planned event later today. We say planned, as there’s also worries about the Fed having to step in with a $53.2 billion reverse repo program to ease a funding squeeze. That is this their first such action in over 10 years and that ‘repo’s’ are hitting the headlines, itself is a cause for concern. And markets now wonder if it will have an impact on today’s rate decision.

As for the Fed meeting, Bloomberg still expects around a 96% chance of a Fed cut, whereas the CME FedWatch Tool (which has been distorted by the funding squeeze) is around 56%. It would likely catch traders off guard to not see a cut today, but we must wonder if their reverse repo program could place this on ice. Powell will likely have to at least mention repo’s in his speech, so keep an eye on his remarks 30 mins after the rate decision. It may well be the more exciting part. 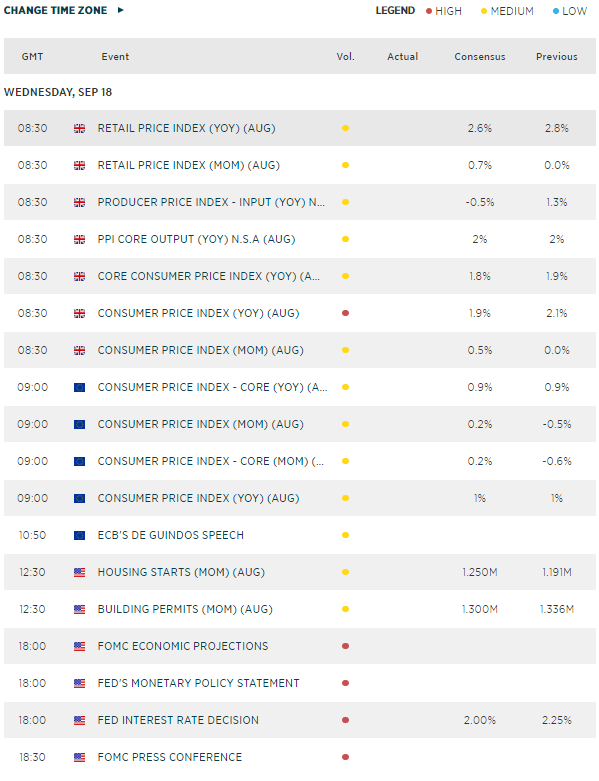