While the dollar is on a tear, precious metal stocks have gotten away with it lately. But how long will their resistance last?

After the USD Index’s negative response to the ECB’s monetary policy meeting on Oct. 28, I warned on Oct. 29 that dollar bears were unlikely to celebrate for much longer. I wrote:

Based on the rather random comment during the conference, the traders panicked and bought the EUR/USD, which triggered declines in the USD Index (after all, the EUR/USD is the largest component of the USDX).

Was the breakout to new 2021 lows invalidated? No. The true breakout was above the late-March highs (the August highs also served as a support level, but the March high is more important here) and it wasn’t invalidated.

What was the follow-up action? At the moment of writing these words, the USDX is up and trading at about 93.52, which is just 0.07 below the August high in terms of the closing prices. Consequently, it could easily be the case that the USD Index ends today’s session (and the week) back above this level.

And with the USD Index making quick work of 94, 95, and now 96, the greenback’s rally continues to gain steam. What’s more, the USD Index also surged above its late 2020 resistance and 98 should be the next bullish milestone.

More importantly, however, gold, silver, and mining stocks are sensing that something is amiss. For example, while they largely ignored the USD Index’s recent ascent, their negative correlations resurfaced last week (on a very short-term basis, so far, but still). Moreover, while the precious metals’ recent rallies were likely euro-weakness-driven and not USD Index-strength-driven, the dollar basket’s uprising should elicit more pain for gold, silver, and mining stocks over the medium term.

The euro recently declined and the prices of silver and gold recently rallied shortly after dovish comments from the eurozone. Namely, while the expansionary nature of fiscal and monetary decisions in the U.S. might be after its peak (with the infrastructure bill signed even despite high inflation numbers), the eurozone is far from limiting its expansionary (i.e., inflationary) policies, and it was just made clear recently.

That was bearish for the euro and bullish for the gold price – as more money (euros in this case) would be chasing the same amount of physical gold.

The point here is that it might have been the decline in the value of the European currency that caused gold to rally, and it had little to do with what happened in the USD Index.

Don’t get me wrong, most of the time, the gold-USD link is stable and negative. In some cases, gold shows strength or weakness by refusing to move in tune (and precisely: again) with U.S. dollar’s movement. But in this case, it seems that it’s not about the U.S. dollar at all (or mostly), but rather about what happened in the Eurozone and euro recently.

As a result, with the USD Index likely to take the lead in the coming months, the precious metals should suffer along the way. For context, the USD Index is approaching overbought territory and a short-term decline to ~95 isn’t out of the question. However, it’s more of a possibility than a given. Moreover, the greenback’s medium-term outlook remains robust, and any short-term pullback is likely a corrective downswing within a medium-term uptrend.

Circling back to the euro, I’ve been warning for months that the Euro Index was materially overvalued and that a sharp re-rating would likely unfold. I wrote previously:

The next temporary stop could be ~1.1500 (the March 2020 highs, then likely lower). For context, the EUR/USD accounts for nearly 58% of the movement of the USD Index, and that’s why the euro’s behavior is so important.

And after the Euro Index sunk to a new 2021 low last week, the European currency has officially fallen off a cliff. To that point, after breaking below the declining support line of its monthly channel, a drawdown to ~111 is likely next in line (which is signaled by the breakdown below its bearish head & shoulders pattern).

The Euro Index is near oversold territory and a short-term bounce may ensue, but the bearish medium-term implications remain intact. 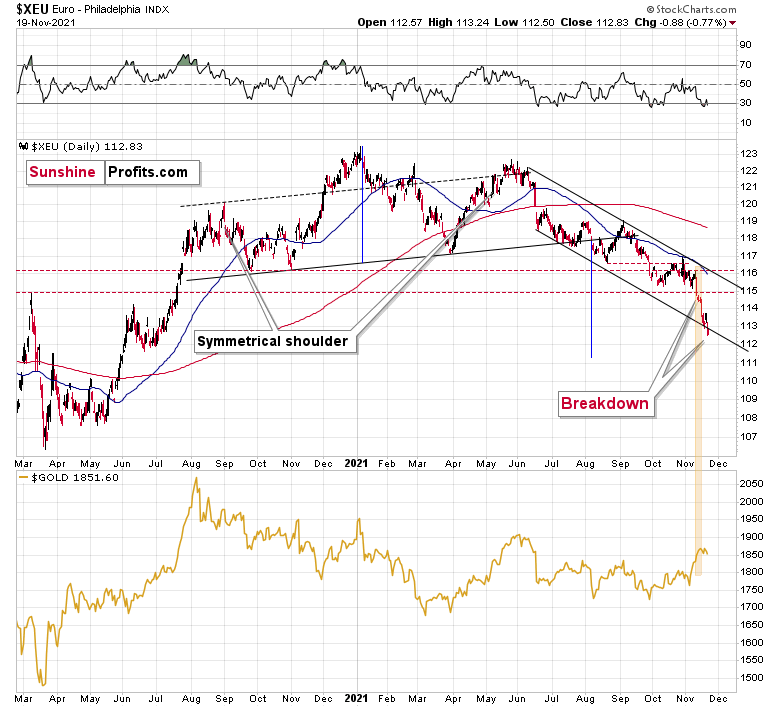 Adding to our confidence (don’t get me wrong, there are no certainties in any market; it’s just that the bullish narrative for the USDX is even more bullish in my view), the USD Index often sizzles in the summer sun and major USDX rallies often start during the middle of the year. Summertime spikes have been mainstays on the USD Index’s historical record and in 2004, 2005, 2008, 2011, 2014 and 2018 a retest of the lows (or close to them) occurred before the USD Index began its upward flights (which is exactly what’s happened this time around).

Furthermore, profound rallies (marked by the red vertical dashed lines below) followed in 2008, 2011 and 2014. With the current situation mirroring the latter, a small consolidation on the long-term chart is exactly what occurred before the USD Index surged in 2014. Likewise, the USD Index recently bottomed near its 50-week moving average; an identical development occurred in 2014. More importantly, though, with bottoms in the precious metals market often occurring when gold trades in unison with the USD Index (after ceasing to respond to the USD’s rallies with declines), we’re still far away from that milestone in terms of both price and duration. Again, the recent move higher in the USD Index doesn’t necessarily apply in the case of the above rule, as it was not the strength of the USD but weakness in the euro that has driven it.

Likewise, with the USD Index now approaching its long-term rising support line (which is now resistance), a rally above the upward sloping black line below would invalidate the prior breakdown and support a move back above 100. However, with the dollar basket’s weekly RSI (Relative Strength Index) now above 70, a short-term consolidation may ensue.

Conversely, please note that the recent medium-term rally has been calmer than any major upswing witnessed over the last 20 years where the USD Index’s RSI has hit 70. I marked the recent rally in the RSI with an orange rectangle and I did the same with the second-least and third-least volatile of the medium-term upswings. 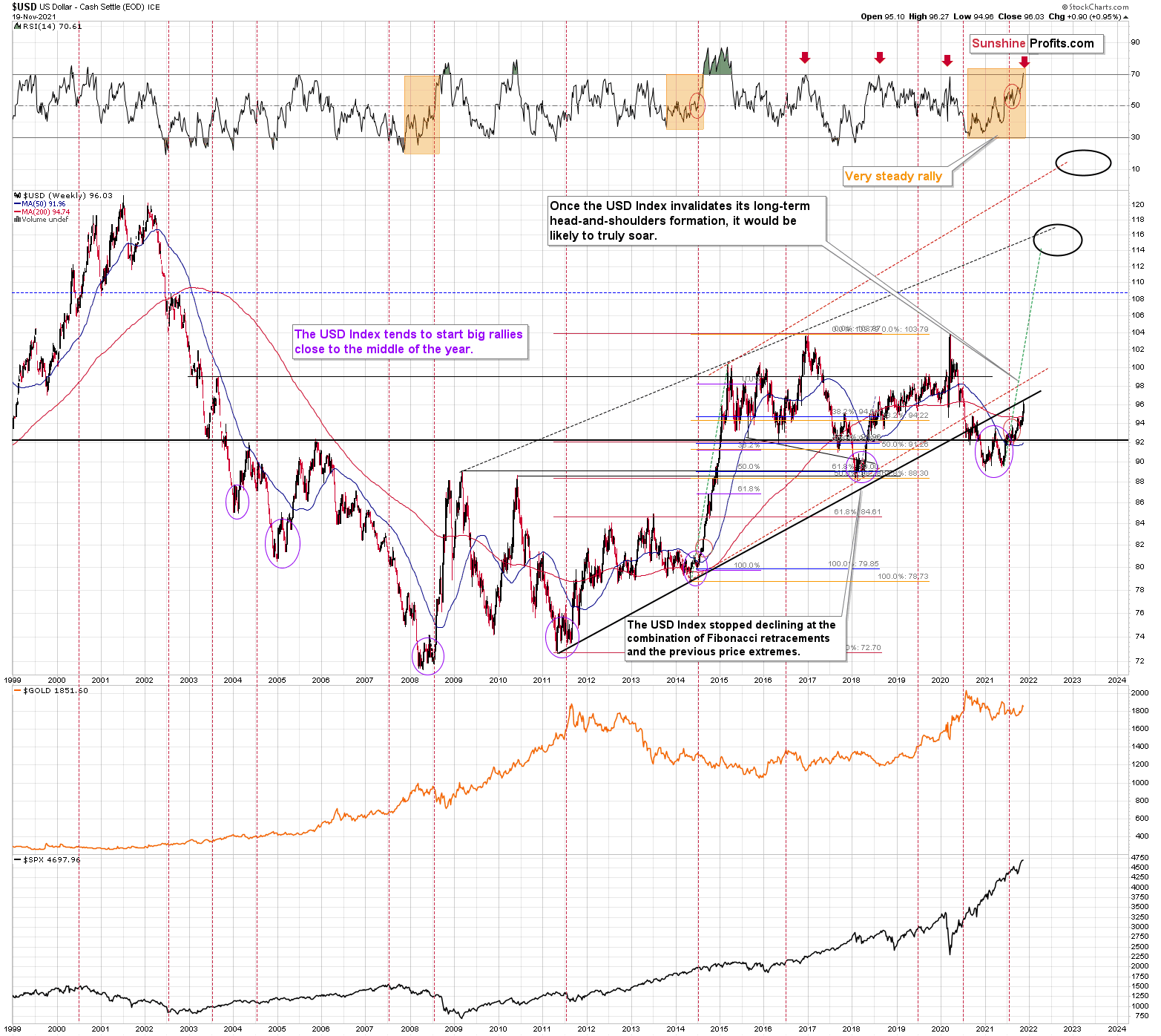 The sharp rallies in 2008 and 2014 were of much larger magnitudes. And in those historical analogies, the USD Index continued its surge for some time without suffering any material corrections.

As a result, the short-term outlook is more of a coin flip. However, the medium-term outlook remains profoundly bullish, and gold, silver, and mining stocks may resent the USD Index’s forthcoming uprising.

Just as the USD Index took a breather before its massive rally in 2014, it seems that we saw the same recently. This means that predicting higher gold prices (or the ones of silver) here is likely not a good idea.

Continuing the theme, the eye in the sky doesn’t lie. And with the USDX’s long-term breakout clearly visible, the wind still remains at the dollar’s back. 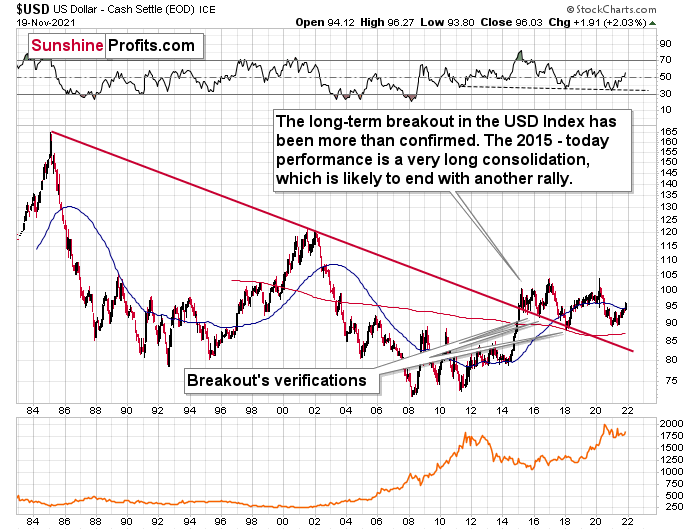 With my initial 2021 target of 94.5 already hit, the ~98 target is likely to be reached over the medium term, and the USDX will likely exceed 100 at some point over the medium or long term. Keep in mind, though: we’re not bullish on the greenback because of the U.S.’ absolute outperformance. It’s because the region is fundamentally outperforming the Eurozone, the EUR/USD accounts for nearly 58% of the movement of the USD Index, and the relative performance is what really matters.

In conclusion, while the USD Index’s 2021 surge caught the consensus by surprise, I’ve been sounding the bullish alarm for many months. And with more strength likely to materialize over the medium term, the ‘death of the dollar’ narrative has been grossly over-exaggerated. Moreover, while gold, silver, and mining stocks recently ignored the greenback’s fervor, history implies that their relative strength won’t last. As a result, more downside will likely confront the precious metals over the next few months.