European stocks were off half a percent this morning in early trade after another fragile day on Wall Street saw selling into the close and another weaker finish. All eyes today on the US CPI inflation number, minutes from the FOMC’s last meeting and the start of earnings season with numbers due out from JPMorgan. Asian equities mixed after Chinese trade data was better than expected.

Markets in Europe turned more positive after the first half hour but it’s clear sentiment is anaemic The FTSE 100 is chopping around its well-worn range, the DAX is holding on to its 200-day moving average just about. Possible bullish crossover on the MACD needs confirming – big finish required. 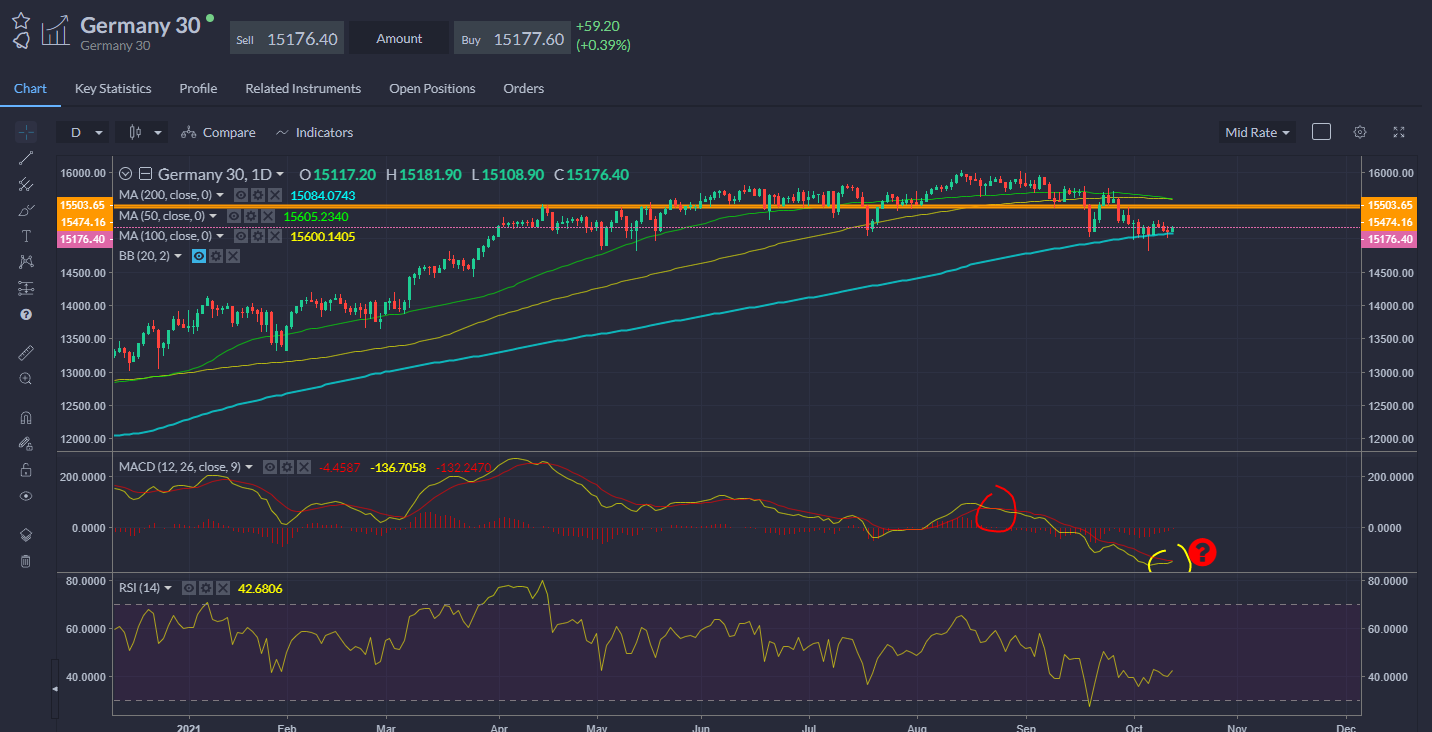 But... 38% of households across the US report facing serious financial problems in the past few months, a poll from NPR found. Which begs the question – why and how people are not getting back into work and quitting. One will be down to massive asset inflation due to central bank and fiscal policy that has enabled large numbers of particularly older workers to step back sooner than they would have down otherwise. Couple of years left to retire – house now worth an extra 20% and paid off, 401k looking fatter than ever, etc, etc. Number two is something more sinister and damaging – people just do nothing, if they can. Working day in, day out is like hitting your head against a brick wall – you get a headache, you die sooner, and you don’t go back to it once you’ve stopped doing it. Animal spirits – people’s fight to get up and do things they’d prefer not to do – have been squashed by lockdowns. 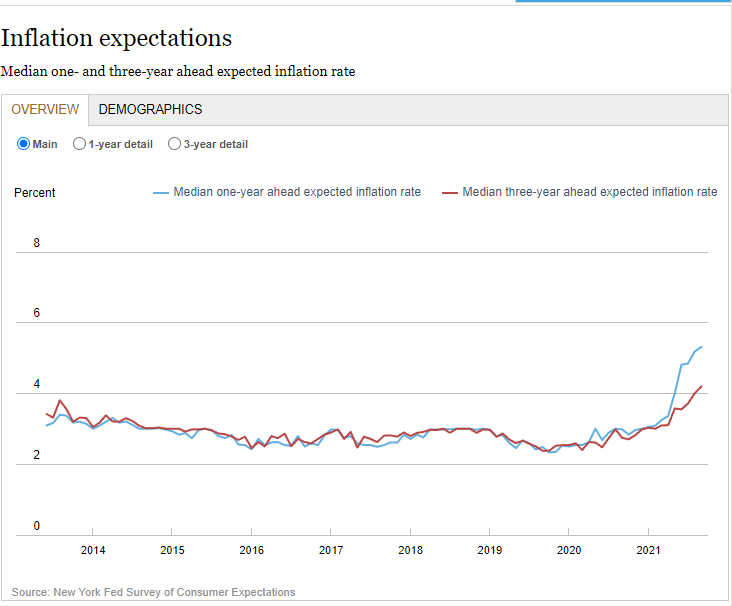 UoM preliminary report on Friday – will give us the latest inflation expectation figures. This is where expectations stand now. Today’s CPI print is expected to show prices rose 0.4% on the month to maintain the annual rate at 5.4%.

The Fed’s Clarida said the bar for tapering was more than met on inflation and all but met on employment. FOMC minutes will tell us more about how much inflation is a worry - we know the taper is coming, the question is how quickly the Fed moves to tame inflation by raising rates.

Watch for a move in gold – it's been a fairly tight consolidation phase even as rates and the USD have been on the move – the inflation print and FOMC minutes could spur a bigger move. Indicators still favour bulls. 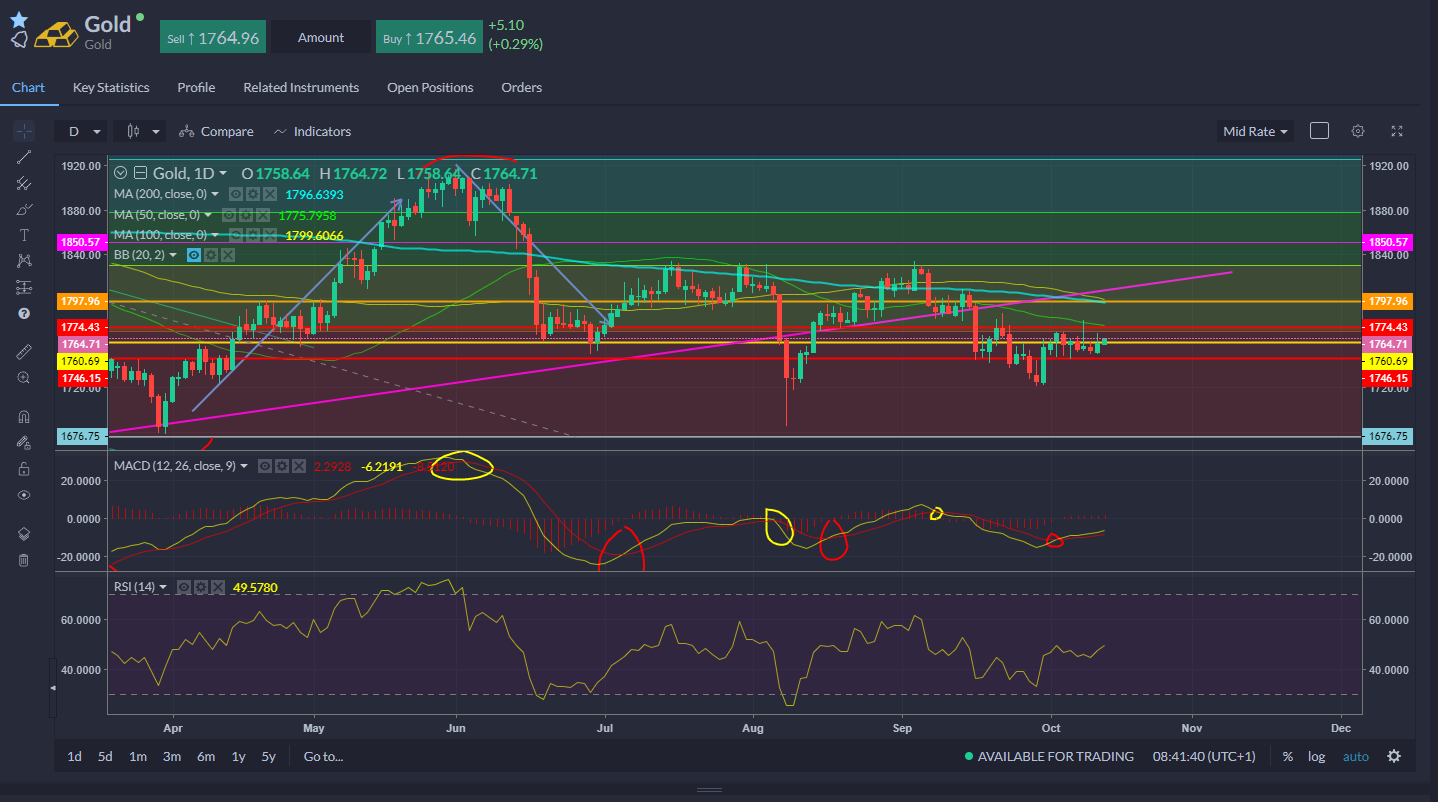 US earnings preview: Banks kick off the season

Wall Street rolls into earnings season in a bit of funk. The S&P 500 is about 4% off its recent all-time high, whilst the Nasdaq 100 has declined about 6%, as the megacap growth stocks were hit by rising bond yields. S&P 500 companies are expected to deliver earnings growth of 30%, on revenue growth of 14%.

JPMorgan Chase gets earnings season underway with its Q3 numbers scheduled for Oct 13th before the market open. Then on Thursday we hear from Bank of America, Citigroup, Morgan Stanley and Wells Fargo, before Goldman Sachs rounds out the week on Friday. JPMorgan is expected to deliver earnings per share of $3, on revenues of $29.8bn. Note JPM tends to trade lower on the day of earnings even when it beats expectations for revenues and earnings.

Outlook: Nike and FedEx are among a number of companies that have already issued pretty downcast outlook. Supply chain problems are the biggest worry with a majority of companies releasing updates mentioning this. Growth in the US is decelerating – the Atlanta Fed GDPNow model estimates Q3 real GDP growth of just 1.3%. Higher energy costs, rising producer and consumer inflation, supply bottlenecks, labour shortages and rising wages all conspiring to pull the brake on the recovery somewhat. Still, economic growth has not yet given way to contraction and after a global pandemic it will take time to recover fully.

Trading: Normalisation of financial markets in the wake of the pandemic - ie substantially less volatility than in 2020 - is likely to weigh somewhat on trading revenues, albeit there was some heightened volatility in equity markets towards the end of September as the stock market retreated. Dealmaking remains positive as the recovery from the pandemic and large amounts of excess cash drove business activity.

Costs: The biggest concern right now for stocks is rising costs. Supply-side worries, specifically rising input and labour costs, pose the single largest headline risk for earnings surprises to fall on the downside. The big banks have already raised their forecasts for expenses this year on a number of occasions. It’s not just some of the well-publicized salary hikes for junior bankers that are a concern – tech costs are also soaring.

Interest rates: Low rates remain a headwind but the recent spike in rates on inflation/tapering/tightening expectations may create conditions for a more positive outlook. The 10s2s spread has pushed out to its widest since June. Rising yields in the quarter may have supported some modest sequential net interest income improvement from Q2.

Chart: After flattening from March through to July, the yield curve is steepening once more.

Loan demand: Post-pandemic, banks have been struggling to find people to lend to. Commercial/industrial loans remain subdued versus a year ago, but there are signs that consumer loan growth is picking up.  Fed data shows consumer loan growth has picked up as the economy recovers. However, UBS showed banks were lowering lending requirements in a bid to improve activity, which could impact on the quality, though this is likely a marginal concern given the broad macro tailwinds for growth. Mortgage activity is expected to be substantially down on last year after the 2020 surge in demand for new mortgages and refinancing.

Other stocks we are watching

The Hut Group (THG) – tanked 30% yesterday as its capital markets day seems to have been a total bust. Efforts to outline why the stock deserves a high tech multiple and what it’s doing with Ingenuity and provide more clarity over the business seemingly failed in spectacular fashion. The City has totally lost confidence in this company and its founder. No signs of relief for the company as investors give it the cold shoulder. Shares are off another 5% this morning.

Diversified Energy – the latest to get caught in the ESG net – shares plunged 19%, as much as 25% at one point after a Bloomberg report said oil wells were leaking methane. Rebuttal from company seemed to fall on deaf ears. Shares recovering modestly, +3% today.

Analysts are lifting their Netflix price targets, partly on the popular "Squid Game." Netflix will report its third-quarter earnings next week.