As the latest inflation numbers were well below the Czech National Bank's forecasts, we believe the CNB repo rate will remain unchanged at 7%. For Hungary, although another 100bp increase is on the table, we favour a 75bp hike right now due to the combination of a lower CPI peak and worse GDP outlook.

Next Thursday, the second monetary policy meeting will be held under the leadership of the new CNB board. Nothing has changed in our forecast since the last meeting and we expect rates to remain unchanged this time, too. This is indicated by both the statements of the board members and the latest inflation numbers, which were well below the CNB's forecasts in July and August. The same result can be expected from the September number (our preliminary forecast is for 17.6% year-on-year). On the other hand, the GDP and wage numbers were higher than the CNB's forecast, but we still believe that lower-than-expected inflation provides an ample buffer for the current board. Thus, we do not see a significant risk of a change in the current CNB view for the coming months, which means that this hiking cycle is done. Read our full CNB preview here.

Hungary: A 75bp hike is expected on Tuesday

The main event of next week in Hungary is the rate-setting meeting of the National Bank of Hungary. We narrowly favour a 75bp hike on Tuesday, taking the Bank Rate to 12.50%, although another 100bp is clearly on the table. The government's decision to prolong price cap measures for basic food and fuel will lower the near-term CPI peak, somewhat limiting concerns about consumer inflation expectations becoming extreme. Moreover, the introduction of liquidity draining measures and the expected improvement in the monetary transmission mechanism reduce the urgency to continue tightening in 100bp increments. The latest official communication, which pointed out that the CPI peak might be near - a milestone in this tightening cycle - could also be a sign of a possible slowdown in the pace of hiking. We also see the central bank revising its GDP outlook significantly downward in 2022 and 2023, providing another talking point for reducing the size of rate increases. However, decision-makers might be worried about the vulnerability of the forint, and will also argue that the government’s latest support package (prolonged mortgage rate freeze, energy bill and investment support to energy-intensive SMEs, investment support to large energy-intensive factories and a job protection action plan) could increase medium-term inflation given it reduces the risk of recession. If these latter arguments are taken into account with greater weight, we see a chance for a 100bp hike next week. That means it’s a close meeting to call. Read our full NBH Preview here. 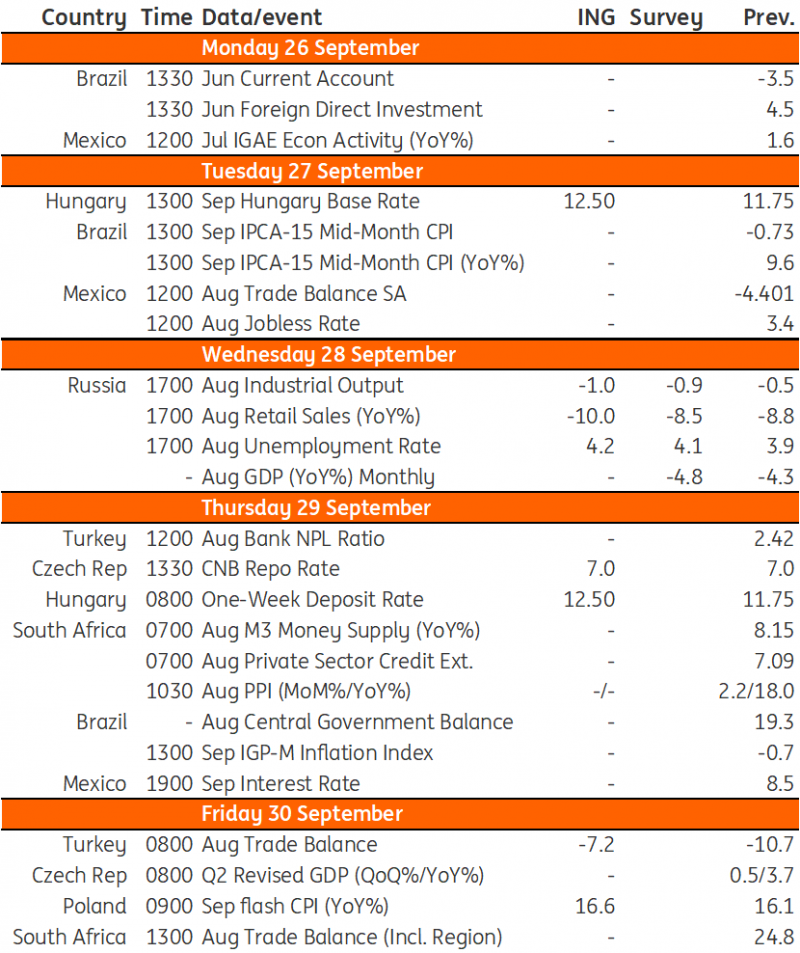 Read the original analysis: Key events in EMEA next week