In light of the Bank of England's five-quarter recession call, GDP figures will be the focus next week. We are expecting June's GDP to drop by 1.1% on the month. In the US, July's headline inflation may have the smallest monthly increase since January 2021 and we believe the annual rate of inflation, excluding food and energy, will rise to 6% from 5.9%.

US: Next week's inflation data is set to show prices rising more rapidly than the Fed would like to

After a cumulative 225bp of Federal Reserve rate hikes, including two consecutive 75bp moves, financial markets are pricing just under 110bp of additional interest rate increases over the next six months. We continue to look for 50bp rate hikes in September and November with a final 25bp hike in December despite the US economy having fulfilled the requirement of a technical recession, with two consecutive quarters of negative GDP growth in the first half of this year. This was primarily due to big swings in trade and inventory positioning. Given that unemployment is still falling and consumer spending is still growing, it is not yet what we might term a “real” recession.

Moreover, next week’s inflation data is set to show prices continuing to rise more rapidly than the Fed would like, although the recent sharp falls in gasoline prices do provide some relief. Indeed, the headline rate of CPI may rise just 0.2% month-on-month, which would be the smallest monthly increase since January 2021 and result in the annual rate of inflation slowing to 8.7% from 9.1%. However, the core rate is still expected to post a 0.4% MoM gain with housing costs continuing to boost the index. This would mean the ex-food and energy annual rate of inflation rises to 6% from 5.9%, reinforcing the message that it is still a long battle to get inflation back to the 2% target.

The other US release we will be paying close attention to is the University of Michigan sentiment index. It has plunged as the cost of living crisis and falling equity markets sapped spending power and confidence. However, now that gasoline prices have dropped from a national average of $5/gallon in June to below $4.15 in early August, this should provide some relief and support. Consequently, we expect the index to bounce far more than the consensus is looking for while inflation expectations may also drop back a little. With it costing less to fill up gasoline tanks, households will have more cash in their pockets. With trade and inventories likely to be more helpful for growth in the current quarter, we think 3Q GDP can bounce back into positive territory. We are currently pencilling 3% annualised GDP growth.

Next week’s UK GDP numbers take on fresh significance in light of the Bank of England’s forecast for a five-quarter recession starting later this year. In practice, Friday’s figures – covering June (and 2Q overall) – will be heavily skewed by the addition of an extra bank holiday. Previous jubilee holidays in 2002/2012 have seen sharp falls in manufacturing and wholesale/retail output, which is typically recovered the following month. Meanwhile, the number of doctor appointments fell in June according to the latest NHS figures, which points to a month-on-month decline in health output – a key source of volatility in recent monthly GDP readings. In short, it could be hard to separate the impact of rising inflation from the noise.

But the risk of a recession this winter is undoubtedly rising. It’s worth remembering the Bank of England’s recession forecast, which predicts a peak-to-trough GDP hit of around 2%, is premised a) on Bank Rate reaching 3% in coming months (which we think is unlikely) and b) no further fiscal support (which is unrealistic). The strength of the jobs market and the potential for ‘labour hoarding’ by companies may also help limit the scale of the downturn. Nevertheless, with demand weakening and the supply side strains showing hints of easing (at least judging by goods prices), we think the Bank is nearing the end of its tightening cycle. We expect another 50bp rate hike in September, but that could be more or less it.

For the eurozone, the calendar is as empty as the offices around the continent this summer. The main indicator of note is industrial production for June due out on Friday, for which signals are pretty mixed. In general, manufacturing businesses indicate rough weather at the moment with declining new orders and shrinking output. Also, input shortages have been fading but continue to keep specific industries from full production. Friday’s release will give a sense of how much these factors impacted actual production figures in June and put recessionary concerns into further perspective. 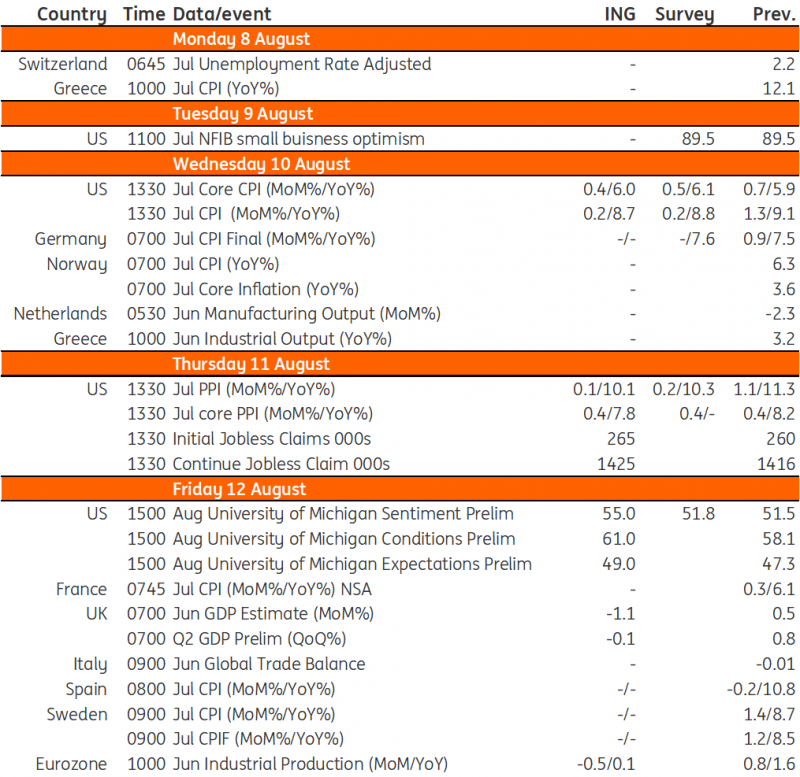