How to handle debt at 130% of GDP with no growth? At a time when Italy is seeing a new wave of volatility over its spread1, the persistent sluggishness of its economy is more than ever at the forefront. Since 2012, growth in Italy has averaged 1% per year, compared to 2% for the eurozone as a whole. At the end of 2018 the country's economy slipped back into recession, for the third time in ten years. This lack of economic vigour is far from new (see Chart 1) and its causes are to be found beyond the global crisis of 2008. In the first section of this report, we look at the economy's structural weaknesses and the deterioration of its potential growth rate2.

Struggling for investment and financing

Both the estimated level and the make-up of Italy's potential growth rate3 between 1995 and 2018 suggest a lack of vigour that has no real equivalent in other European Union (EU) countries, and that is also a fairly longstanding concern.

Before 2008, the country's potential growth rate was already only half that of the euro zone as a whole (1% per year on average between 1996 and 2007). The two successive crises (financial and sovereign debt) that followed dragged potential growth rates into negative territory4, and the recovery since 2016 hasHow to handle debt at 130 been hesitant (Chart 1). 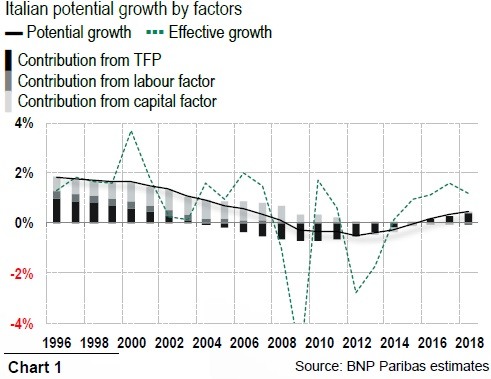 Underlying these two ‘lost decades' is the stagnation of total factor productivity (TFP)5, which is currently at the same level as in 1995 (Chart 2). Over the same period, TFP in Germany and France has risen by nearly 13%. In Spain, although it was flat up until 2013, TFP has since risen markedly. 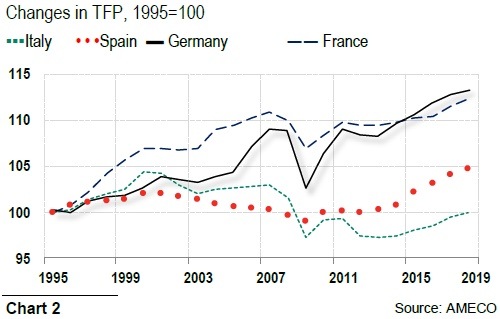 Setting aside structural effects (the expansion of tertiary sector activities, the relatively high weighting of non-merchant public services), the limited gains in productivity in Italy result primarily from a chronic shortfall in investment, with the stock of capital having stopped rising in 2012 (Chart 4). 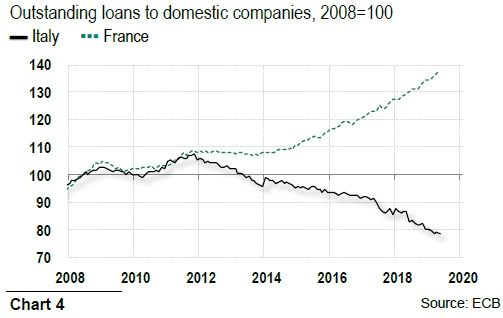 In 2018 gross fixed capital formation by companies (at constant prices) was still at its 1999 level. R&D expenditure has run at only 1.2% of GDP over the past twenty years according to the Organisation for Economic Cooperation and Development (OECD), compared to 2.1% in France for example. Several causes have been identified for this shortfall: the fragmented industrial fabric (95% of which consists of micro-companies), low levels of competition and the focus on sectors with a low technological component6. Most studies show that R&D expenditure rises in line with company sizes, meaning that Italian R&D investment has often fallen below the threshold needed to benefit from technology transfers and access external markets7. As a result, the Digital Economy and Society Index (DESI), developed by the European Commission, ranks Italy 25th of the EU nations, very nearly at the bottom of the pile8.

Lending to companies, which in contrast to the trend seen in other countries, has not recovered in Italy (Chart 4), has been another brake on investment. Following the sovereign debt crisis in the euro zone, and given their exposure to Italian Treasury securities, domestic banks have seen financing costs rise and ratings fall, a phenomenon that has been aggravated by the country's return to recession in 2012-2013 and the deterioration of balance sheet quality. Although the situation has improved since (longer-term loans and asset purchases from the ECB, reduction in the share of nonperforming loans, improvements in solvency ratios, etc.), Italian banks are still suffering from low levels of profitability by European standards, and their ability to finance the economy remains constrained (IMF, 2019)9.

Over and above the shortage of banking resources, their allocation in the post-crisis period has not been efficient. A Bank of Italy study (Schivardi et al, 2017)10 examined how, in order to address tighter prudential standards, banks with low capital (primarily the regional banks) have sought to avoid materializing losses by extending credit to so-called ‘zombie' firms (those whose return on equity stands below their cost of capital). According to the authors, such a misallocation has caused credit restrictions to healthy borrowers and higher probability for them to default.

Labour: a scarce and undervalued resource

Changes in the labour factor in Italy have also contributed to the deterioration of the potential growth rate, despite the reforms of the 1990s and 2010 (including the Jobs Act)11.

Average annual growth in hours worked, which was still positive in the 2000s (at 0.3%), has fallen to zero, and its contribution to potential growth became negative from 2014 on (Chart 4). The reforms helped drive the growth in jobs, but ignored training and education policies. At 22%, the share of people aged 25 to 34 with a university degree is 7 points below the EU average. Moreover, Italy ranks poorly in terms of professional training and adult skill levels (OECD, 201912).

The proportion of the long-term unemployed has remained high and stable, at 60% of the total in 2018, as has structural unemployment. At 10.2% of the active population (European Commission figure), this remains one of the highest rates in the OECD; more importantly, it has not fallen, whilst Spain, Portugal and France have all seen progress in this area recently.

Lastly, the population is ageing (nearly one Italian in four is aged 65 or over, making Italy the second oldest country in the world, after Japan) and the working-age population is shrinking. In addition, Italy's activity rate of 67%, although rising, is one of the lowest in the euro zone (it is 81% in Germany for instance)13. Another unwelcome record is that 29% of young Italians (20 to 34 years old) are neither in employment nor in education or training (NEETs, Eurostat), compared to an EU average of 17%14; 50,000 young people leave the country every year.

Has the output gap already closed?

The downtrend in the potential growth rate could mean that although it is now seeing a delayed and modest recovery, the Italian economy is already facing capacity constraints. This would appear to be the European Commission's analysis, when it indicates that the output gap (the difference between GDP and its potential level) narrowed in 2018 (Chart 5). Although a direct approach (see Box 1) tends to confirm this diagnosis, it is far from unanimously accepted. Both the OECD and the International Monetary Fund (IMF) differ from the Commission, and believe that Italy's output gap is still significantly negative. 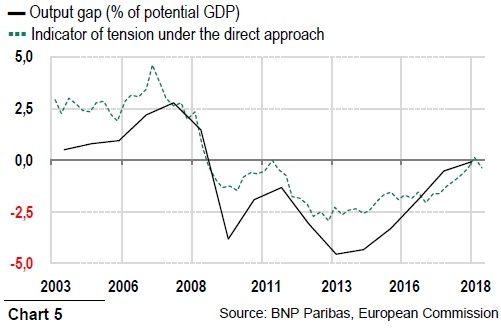 This debate is not just theoretical in nature: the economy's position in the cycle determines the cyclical element of the deficit (that part which increases or decreases due to the automatic stabilisers) and the effectiveness of policies to support demand. In its latest report on Italy, the OECD was fairly favourable regarding the budget target of improving the position of the poorest citizens. But the organisation doubts that a minimum guaranteed income will achieve this without structural measures to improve recipients' inclusion in employment15. Irrespective of their assessment of the economy, all the major institutions – the Commission, IMF and OECD – share the view that to recover, Italy must first reform.