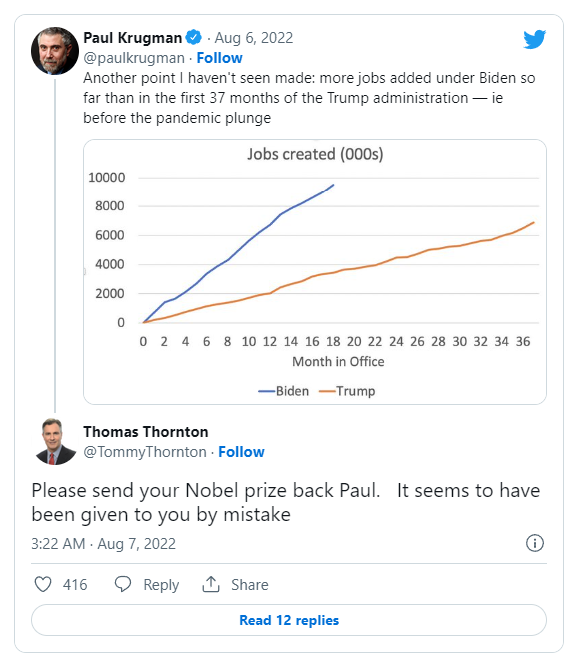 Investopedia notes that in 1979, Paul Krugman wrote a paper that earned him the 2008 Nobel Prize in Economic Sciences for introducing an entirely new theory of international trade.

It may be instructive to compare Krugman's stance on free trade to mine. First, let's ponder a few background questions.

With those questions in mind, let's compare what I believe vs. Krugman's trade beliefs that won him the Nobel prize.

This is what I think….

Moral outrage is common among the opponents of globalization–of the transfer of technology and capital from high-wage to low-wage countries and the resulting growth of labor-intensive Third World exports. These critics take it as a given that anyone with a good word for this process is naïve or corrupt and, in either case, a de facto agent of global capital in its oppression of workers here and abroad.

But matters are not that simple, and the moral lines are not that clear. In fact, let me make a counter-accusation: The lofty moral tone of the opponents of globalization is possible only because they have chosen not to think their position through. While fat-cat capitalists might benefit from globalization, the biggest beneficiaries are, yes, Third World workers.

The benefits of export-led economic growth to the mass of people in the newly industrializing economies are not a matter of conjecture. A country like Indonesia is still so poor that progress can be measured in terms of how much the average person gets to eat; since 1970, per capita intake has risen from less than 2,100 to more than 2,800 calories a day. A shocking one-third of young children are still malnourished–but in 1975, the fraction was more than half. Similar improvements can be seen throughout the Pacific Rim, and even in places like Bangladesh.

The main answer, I think, is a sort of fastidiousness. Unlike the starving subsistence farmer, the women and children in the sneaker factory are working at slave wages for our benefit–and this makes us feel unclean. And so there are self-righteous demands for international labor standards: We should not, the opponents of globalization insist, be willing to buy those sneakers and shirts unless the people who make them receive decent wages and work under decent conditions.

This sounds only fair–but is it? Let’s think through the consequences.

First of all, even if we could assure the workers in Third World export industries of higher wages and better working conditions, this would do nothing for the peasants, day laborers, scavengers, and so on who make up the bulk of these countries’ populations. At best, forcing developing countries to adhere to our labor standards would create a privileged labor aristocracy, leaving the poor majority no better off.

And it might not even do that. The advantages of established First World industries are still formidable. The only reason developing countries have been able to compete with those industries is their ability to offer employers cheap labor. Deny them that ability, and you might well deny them the prospect of continuing industrial growth, even reverse the growth that has been achieved. And since export-oriented growth, for all its injustice, has been a huge boon for the workers in those nations, anything that curtails that growth is very much against their interests. A policy of good jobs in principle, but no jobs in practice, might assuage our consciences, but it is no favor to its alleged beneficiaries.

You may say that the wretched of the earth should not be forced to serve as hewers of wood, drawers of water, and sewers of sneakers for the affluent. But what is the alternative? Should they be helped with foreign aid?

And as long as you have no realistic alternative to industrialization based on low wages, to oppose it means that you are willing to deny desperately poor people the best chance they have of progress for the sake of what amounts to an aesthetic standard–that is, the fact that you don’t like the idea of workers being paid a pittance to supply rich Westerners with fashion items.

In short, my correspondents are not entitled to their self-righteousness. They have not thought the matter through. And when the hopes of hundreds of millions are at stake, thinking things through is not just good intellectual practice. It is a moral duty.

What does Paul Krugman think?

To understand why Krugman won the Nobel prize, please read the above paragraphs again.

Everything above following “This is what I think….” was not written by me. Rather it is purposeful plagiarism.

Paul Krugman wrote that in 1997. The title of Krugman's Op-Ed article in Salon was In Praise of Cheap Labor.

Yes readers, Paul Krugman is on record "In Praise of Cheap Labor".

Paul Krugman won his Nobel Prize for trade. I agree with everything above. There is nothing at all in the full article I would disagree with.

After accurately complaining "my correspondents are not entitled to their self-righteousness," Krugman has morphed into the self-righteous political hack he once criticized.

Yes, Krugman should return the prize. He no longer believes in the free trade ideas that earned him the prize.

If you think sanctions and tariffs will fix any problems please consider Misguided Souls Still Do Not Understand This Simple Truth: Sanctions Don't Work.

And in case you believe in that "Giant Sucking Sound", please consider Trump's Unwinnable Trade War: Gold Explains Why.