Household borrowing rose $226 billion in Q4, with gains across all loan types. The stock of household debt is poised to surpass its pre-recession peak this year, but the composition has shifted relative to a decade ago.

Household debt balances increased a sizable $226 billion in the fourth quarter of 2016, marking the largest quarterly increase since Q4-2013. Mortgage balances grew a substantial $130 billion in Q4, one of the largest increases of this expansion. Auto, student and credit card balances also rose at a steady clip. Total outstanding household debt was $12.58 trillion to end 2016, just $100 billion shy of the all-time high set in Q3-2008.

A Shifting Composition of Borrowing

Although household debt has nearly surpassed its mid-2000s peak, the composition of borrowing has shifted over the past decade. Mortgage debt has been slow to recover throughout this expansion, and, despite recent gains, remains nearly $1 trillion off its pre-recession high. On the consumer credit side, student loans have played an increasingly large role; student loans account for 10.4 percent of total outstanding debt, more than double the share in Q3-2008 (top chart). Auto loans have also grown as a share of the lending pie. More recently, however, there has been a rebalancing toward faster revolving credit growth and slower nonrevolving credit growth. Student loan balances continue to grow, but at a slower pace, and although auto lending is still rising at a steady clip the pace has begun to moderate (middle chart). On a year-ago basis, credit card growth is now in line with student lending and approaching autos, a sharp break with the recent past. 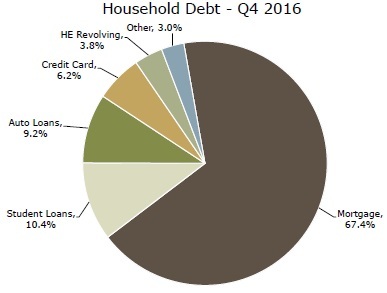 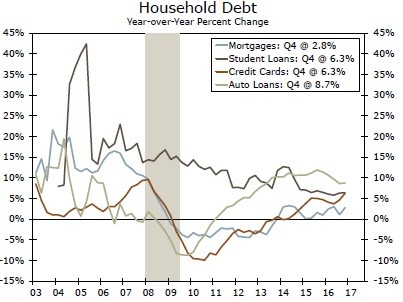 Delinquency rates were roughly unchanged in Q4. Seriously delinquent loans, or balances 90+ days past due, ticked up slightly for student and autos loans but were unchanged for mortgages and credit cards (bottom chart). As we highlighted in a recent Interest Rate Weekly, consumer credit standards have shown some modest signs of tightening. A net 8.3 percent of banks reported tightening standards for credit cards, which marks the first quarter of net tightening since 2010. Similarly, standards for auto loans also constricted with a net 11.7 percent of lenders tightening standards. Notably, banks expect to continue to tighten auto lending standards in 2017. Household leverage remains far below the level seen during the height of the last expansion, however, suggesting overextended households are likely not the source of risk they were in the mid-2oo0s. For now, delinquency rates appear relatively tame, but we will monitor this area closely in 2017. On the flip side, a majority of banks expect to ease lending standards for mortgage loans over the year. According to the New York Fed's data, mortgage lending in 2016 grew by the most since 2007. Thus, if higher interest rates do not weigh too heavily on the housing market, the convergence in growth rates between the various types of household debt may continue in 2017. 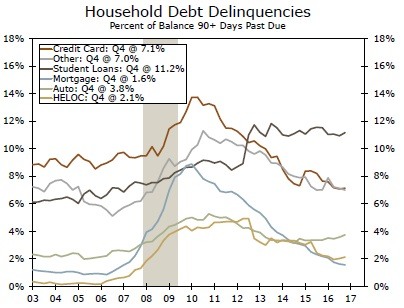