Gold erased all the gains it registered since the beginning of the year in a matter of three days with the US Federal Reserve doubling down on the hawkish policy outlook. XAU/USD climbed to its highest level since November at $1,853 on Wednesday but ended up losing more than 3% from that level to end the week deep in the negative territory below $1,800.

On Monday, the data from the US revealed that the private sector’s business activity expanded at a much softer pace in January than it did in December with the Markit Manufacturing PPMI and Services PMI declining to 55 and 50.9 respectively. Markets remained risk-averse on weak data and US Treasury bond yields continued to edge lower, allowing gold to build on the previous week’s gains.

Although markets remained relatively quiet in the absence of high-tier data releases on Tuesday, XAU/USD managed to advance beyond $1,850 for the first time in nearly two months.

The Fed announced on Wednesday that it left its policy settings unchanged and said that the quantitative easing (QE) program will end in early March as planned. "Indicators of economic activity and employment have continued to strengthen,” the statement further read. During the press conference, however, FOMC Chairman Jerome Powell’s remarks on the policy outlook triggered a dollar rally and caused XAU/USD to fall sharply.

Powell downplayed the gloomy labour market data and said that they had “quite a bit of room” to raise rates without hurting employment. The chairman also pointed out that wages were rising at the fastest pace in years.

Additionally, Powell alluded that policymakers were in favour of a rate liftoff in March but refrained from ruling out a 50 basis points hike. Finally, he explained that they will shift their attention to balance sheet reduction after the first rate hike and added that they will need two meetings to come up with a plan.

These hawkish comments caused Wall Street’s main indexes to continue to suffer losses and provided a boost to the greenback. The benchmark 10-year US Treasury bond yield rose more than 5% and reclaimed 1.8% after edging lower toward 1.7% earlier in the week.

On Thursday, the US Bureau of Economic Analysis (BEA) reported that the US economy grew at an annualized rate of 6.9% in the fourth quarter. With this reading surpassing the market expectation of 5.5% by a wide margin, the US dollar continued to outperform its rivals and forced XAU/USD to extend its slide.

Finally, the BEA's monthly data showed on Friday that the Core Personal Consumption Expenditures (PCE) Price Index rose to 4.9% on a yearly basis in December from 4.7% in November, compared to analysts' estimate of 4.8%. Underlying details of the publication revealed that Personal Spending declined by 0.6% on a monthly basis in December and Personal Income increased by 0.3%. The US Dollar Index retreated modestly from the 19-month high it set at 97.44 late Friday but registered a weekly gain of more than 1.5%.

The ISM will release the Manufacturing and Services PMIs next week but considering how easily the dollar shook off the negative impact of the weak Markit PMI figures, these data are unlikely to hurt the dollar in a significant way even if they fall short of market consensus.

On Thursday, the European Central Bank (ECB) and the Bank of England (BOE) will announce policy decisions.

The ECB is not expected to make any changes to its policy settings and a neutral stance could help the dollar keep its footing by highlighting the policy divergence with the Fed.

The BOE looks set to hike its policy rate for the second time in a row by 25 basis points. In case the BOE refrains from hiking its rate, GBP/USD could face heavy bearish pressure and make it even more difficult for XAU/USD to stage a rebound. On the other hand, a hawkish policy outlook coupled with a rate hike could limit the dollar’s gains, at least in the near term.

On Friday, the US Bureau of Labor Statistics will publish the January jobs report. Nonfarm Payrolls are forecast to rise by 238,000 in January following November’s and December’s dismal increases. The low bar suggests that there is room for a positive surprise and a stronger-than-forecast NFP print should favour the dollar in the near term. On the flip side, a third disappointing reading in a row could weigh on the dollar and open the door for a rebound in XAU/USD.

Nevertheless, Powell made it clear that they are prioritizing inflation control over employment and investors could ignore a meagre growth in payrolls. Having said that, Average Hourly Earnings will be the key data point to watch. On a yearly basis, wage inflation is expected to rise to 5.1% from 4.7%. Fed policymakers are concerned that a steady rise in wages could cause consumer inflation to remain high for a prolonged period. Hence, high wage inflation should be seen as a dollar-positive and vice versa. 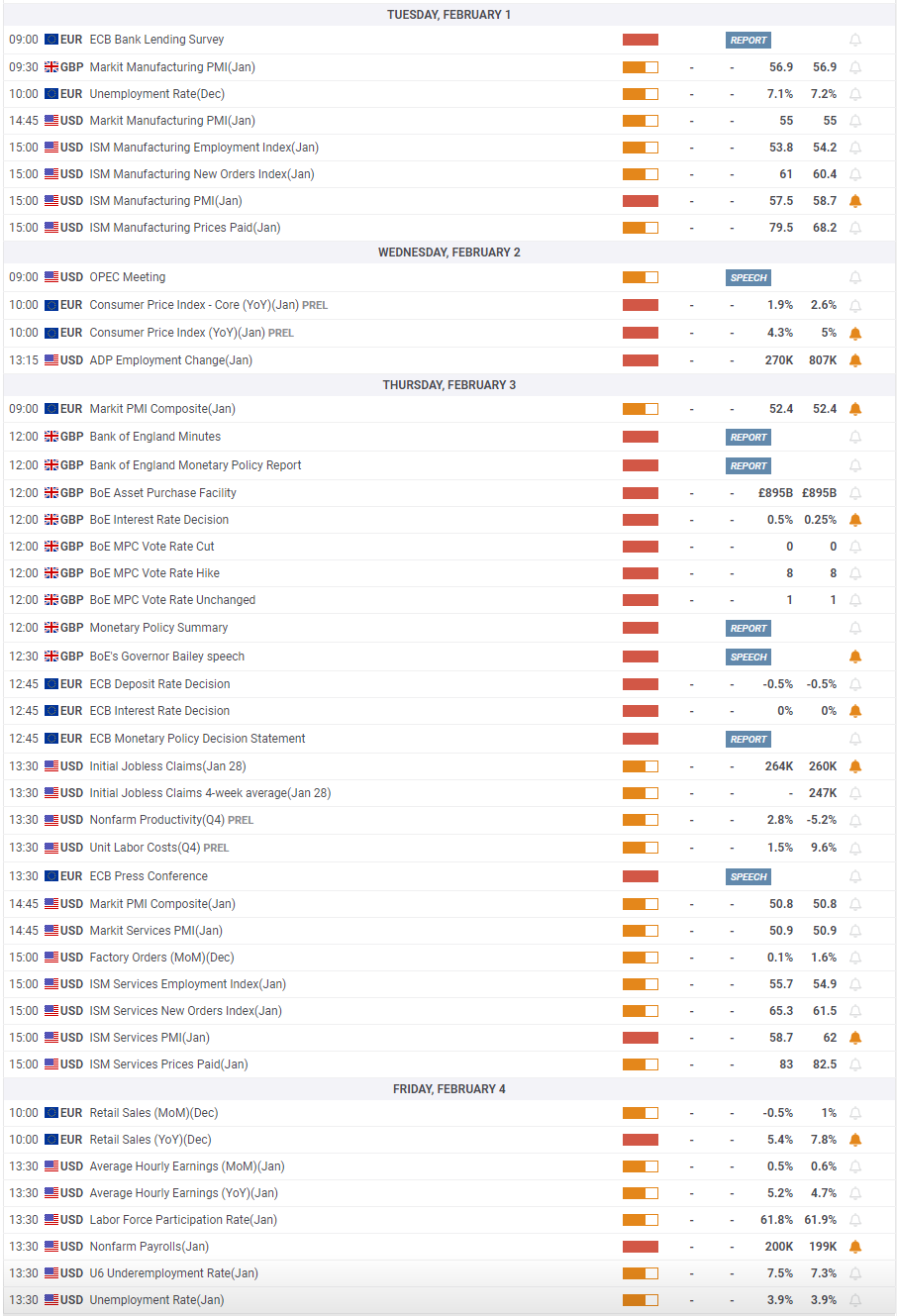 All times in GMT

Gold broke below the ascending trend line coming from mid-December, the 200-day SMA and the 100-day SMA. Confirming the bearish bias, the Relative Strength Index (RSI) indicator on the daily chart fell below 50. The fact that the RSI remains above 30 suggests that there is more room for the pair on the downside before it turns technically oversold.

First support is located at $1,770 (static level). In case this level turns into resistance, the next bearish target could be seen at $1,755 (static level).

On the upside, the 100-day SMA forms the first resistance at $1,795. Even if XAU/USD reclaims that level, the 200-day SMA aligns as the next hurdle at $1,805. Only a daily close above the latter could attract buyers and help gold shake off the bearish pressure.

Gold is likely to remain under bearish pressure in the short term, according to the FXStreet Forecast Poll. The average target on the one-week view, however, aligns at $1,781, suggesting that losses could remain limited. The bearish tilt is also apparent on the one-month view. 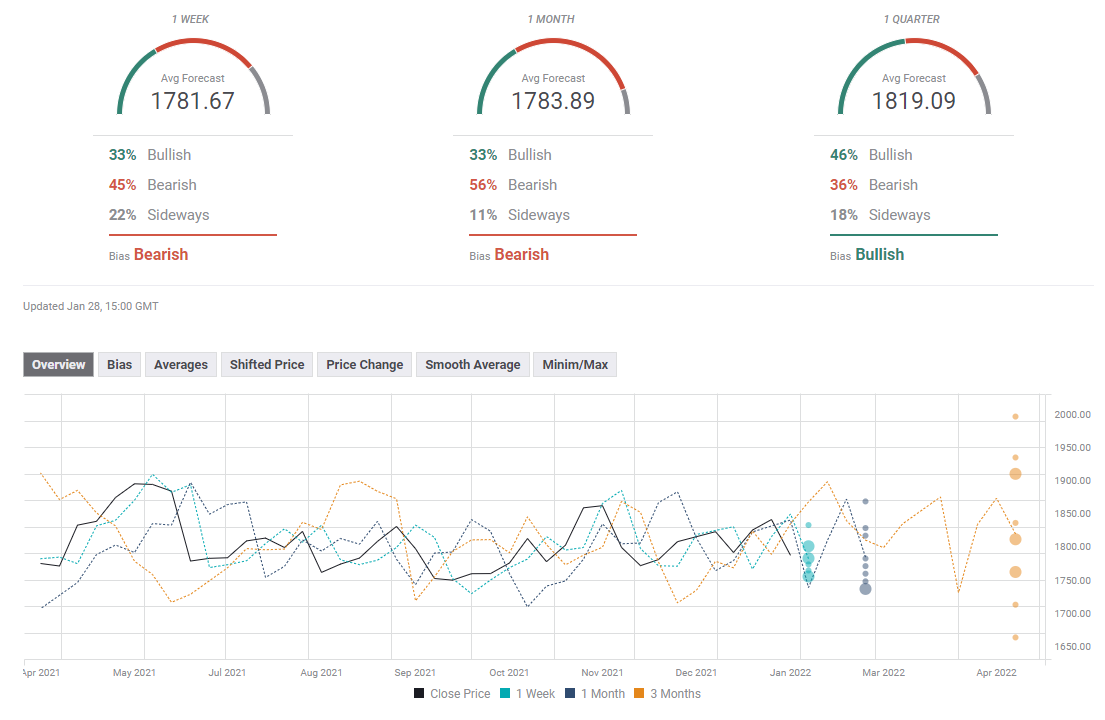 EUR/USD stays on the way to reverse the pullback from a monthly high, picking up bids to 1.0685 during early Thursday morning in Asia. Second reading of Q1 2022 US GDP, Jobless Claims and housing data to decorate calendar amid multiple holidays in Europe.