The XAU/USD pair moved sideways at the start of the week as the trading conditions remained thin due to the Memorial Day holiday in the US. On Tuesday, the pair managed to climb to its highest level since early January at $1,916 but ended up closing the day in the negative territory. Although buyers continued to defend $1,900 on Wednesday, the renewed USD strength caused XAU/USD to post its biggest daily percentage loss in three months on Thursday. During the Asian trading hours on Friday, gold extended its slide and touched its lowest level in more than two weeks at $1,856. Nevertheless, the disappointing labour market data from the US triggered a rebound ahead of the weekend and gold settled around $1,890, snapping a four-week winning streak.

The data from the US showed on Tuesday that the business activity in the manufacturing sector continued to expand at a strong pace in May with the ISM Manufacturing PMI rising to 62.1 from 61.5 in April. The publication highlighted once again that input price pressures continued to increase at an unprecedented pace. Reflecting the revived inflation concerns, the benchmark 10-year US Treasury bond yield gained 2% and forced gold to retreat from the multi-month highs it set earlier in the day. On Wednesday, the risk-positive market environment made it difficult for the USD to find demand and allowed gold to reclaim $1,900.

The Automatic Data Processing (ADP) Research Institute announced on Thursday the private sector employment increased by 978,000 in May, surpassing the market expectation of 650,000 by a wide margin. Furthermore, the US Department of Labor reported the weekly Initial Jobless Claims fell to its lowest level in more than a year at 385,000.

Additionally, the IHS Markit’s and the ISM’s Services PMIs notched new series high in May, confirming the continuation of the robust economic recovery in the US. However, the Prices Paid Index of the ISM’s report reached its highest level since July 2008 at 74. On a similar note, "the survey’s price gauges have also climbed to unsurpassed levels, which will add to inflation worries," Chris Williamson, Chief Business Economist at IHS Markit, said while commenting on the Markit Services PMI report. "These unprecedented output and price growth rates will inevitably lead to speculation about an earlier than previously expected tapering of Fed policy."

The 10-year US T-bond yield gained more than 2% following these data releases and the US Dollar Index reached its strongest level in three weeks, mirroring the positive impact of rising yields on the greenback. Consequently, XAU/USD lost nearly 2% on a daily basis.

Finally, the US Bureau of Labor Statistics announced on Friday that Nonfarm Payrolls in May rose by 559,000, falling short of analysts’ estimate for an increase of 650,000. Underlying details of the publication revealed that the Unemployment Rate declined to 5.8% from 6.1% in April and the Labor Force Participation Rate was little changed at 61.5%. With investors assessing the uninspiring May jobs report as a factor that would allow the Fed to delay taper talks, the USD came under strong bearish pressure and XAU/USD staged a decisive rebound toward $1,900.

There won’t be any high-tier macroeconomic data releases on Monday and gold is likely to continue to react to movements in the US T-bond yields within technical boundaries. On Tuesday, the first-quarter GDP data from the euro area and the ZEW Survey from Germany will be featured in the European economic docket. Although these data are unlikely to have a direct impact on gold’s valuation, a sharp fluctuation in the EUR/USD pair could influence the USD demand.

On Thursday, the weekly Initial Jobless Claims report from the US is likely to be ignored by market participants, who will be focused on May Consumer Price Index (CPI) data. In April, the CPI jumped to 4.2% on a yearly basis from 2.6% in March and XAU/USD lost more than 1% on the day of the release, reaffirming gold’s sensitivity to inflation readings and suggesting that a positive surprise in CPI could weigh on gold and vice versa.

In the meantime, the European Central Bank (ECB) will announce its interest rate decision and release the Monetary Policy Statement. Earlier in the week, ECB President Christine Lagarde said the strong policy support will continue to provide a bridge over the pandemic and well into the economic recovery. Market participants will look for clues regarding possible changes to the Pandemic Emergency Purchase Programme (PEPP). A hawkish ECB tone could hurt the greenback, while a dovish stance is unlikely to provide a strong boost to the USD as it would not be a big surprise for market participants.

Ahead of the weekend, the University of Michigan will release its flash estimate of the Consumer Sentiment Index for June.

The Relative Strength Index (RSI) indicator on the daily chart finally dropped below 70 on Thursday’s sharp decline, suggesting that XAU/USD corrected its overbought levels. Meanwhile, the ascending trend line coming from early April held as support on Friday and gold closed above the 20-day SMA, showing investors saw the latest decline as a buying opportunity. 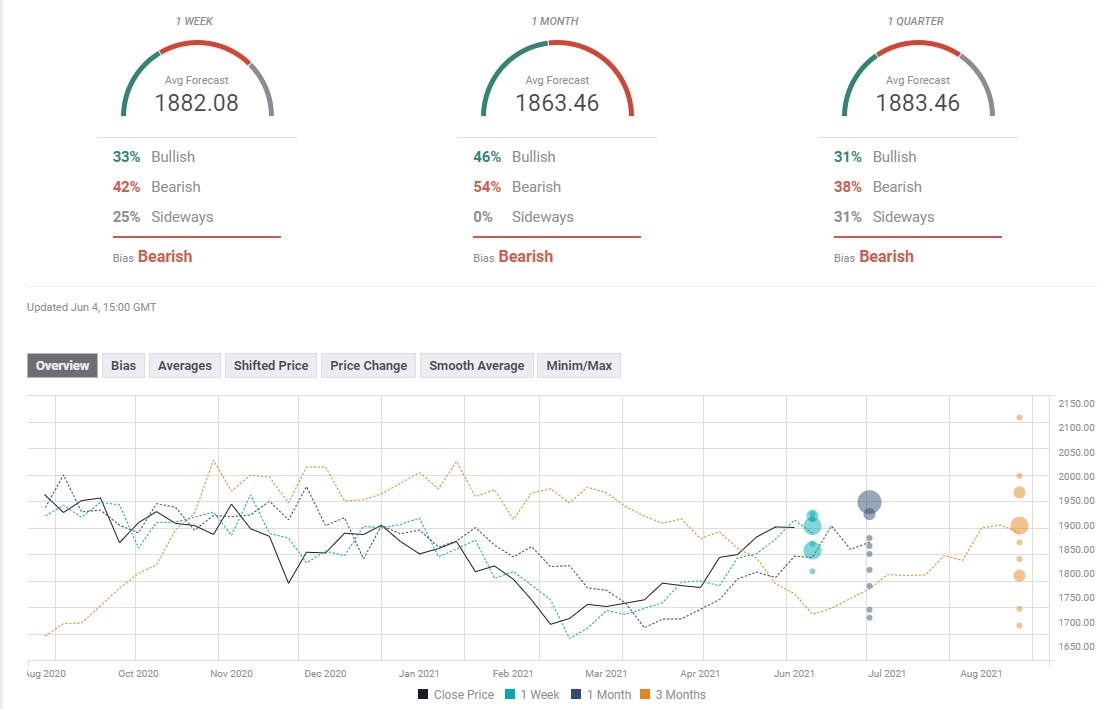 FXStreet’s Forecast Poll shows a slight bearish shift in analysts’ near-term outlook with an average target of $1,882 by the end of next week. With several experts forecasting a deep correction below $1,800, the average price target on a one-month view currently sits at $1,863.